1965 Plymouth Belvedere A990 Hemi Has a Unique Race History

1965 Plymouth Belvedere A990 Hemi Has a Unique Race History 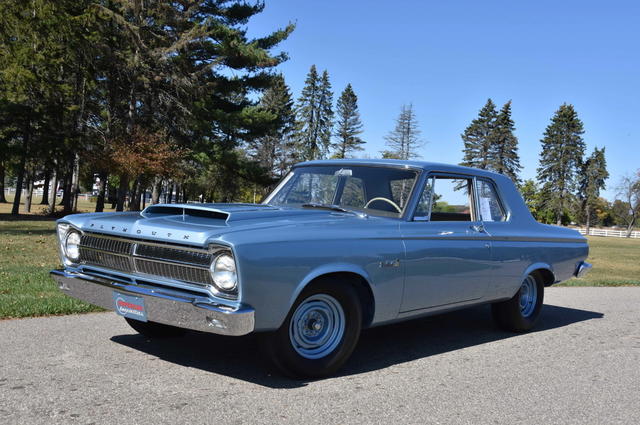 
In late 1964, as the new 1965 cars began to roll off the assembly line, Chrysler’s Detroit Lynch Road Assembly Plant became a hotbed of performance. A special A990 version of the Race Hemi was available in either the new Dodge Coronet or Plymouth Belvedere. The engine retained the 12.5:1 compression ratio and 425hp output rating from its introduction the year before, but it benefitted from several internal improvements, including a redesigned solid-lifter cam, aluminum cylinder heads, and a magnesium intake manifold. The bodies receiving these engines had thin-gauge steel components and lightweight Corning glass in the doors, rear-quarters, and backlight. To qualify for the NHRA’s Super Stock classes, 100 units of each had to be built. Lynch Road turned out 101 Dodges and 102 Plymouths.

On that first day of production, this Plymouth Belvedere A990 was the fifth car to roll off the line and the only one painted in DD1 medium blue metallic. It was shipped to Klipstein Motor Sales in Cheyenne, Wyoming, where a Lowell Howard Jr. from Greeley, Colorado, took possession. Within a year of ownership, he decided to put the car up for sale.

Woody Walcher, a well-known USAC racer, purchased it. When he first brought it home he made a couple of passes at the dragstrip, but he had other plans for it. In 1967, the car was entered in the Pikes Peak Hill Climb in Colorado. The Hemi was warmed over at this point, and a single-four-barrel carburetor was installed per the rule book. He added a bolt-in cage and was ready to go racing.

Can you image running this car all-out up the mountain? Back then it was 12.4 miles of unpaved road, winding through 156 turns and climbing 4,720 feet, and Woody did it on bias-ply tires! Even though the Belvedere spun out on the way up, it placed Third in class that first year. Woody enjoyed the race so much that he kept entering, and received a Fourth in 1968 and Fifth in 1969.

Woody had so much fun at Pikes Peak that he decided to run the car at the Bonneville Salt Flats in 1967. He did OK, but he still wanted it to perform better. He tried various intakes, including a Hilborn injection unit, but it didn’t change the car that much. After his taste of Bonneville, he got a call to come to the Mint 400 desert race in Las Vegas. Needless to say, after a few miles in the race, he decided that it just wasn’t right for the Plymouth.

In 1970, Woody was ready for a new car. Stan Fehr of Eureka, Illinois, was interested in going drag racing. He purchased the old Plymouth for $1,200 as a roller. Where once a mighty Hemi lived, Stan placed a 383 with a two-barrel carburetor and backed it up with a Joe Liberty four-speed. Out back the 8 3/4 rearend was stuffed with 5.57 gears to motivate the Plymouth down the eighth-mile. He nicknamed the car You’re in a Heap of Trouble, and this combination was very successful. He set the AHRA S-F3 World Record with it at Keokuk, Iowa, in 1972.

The car left Stan’s hands, and from what we can tell it was passed from owner to owner until Walt Redmond spotted it in a classified ad in the spring of 1983. The advertisement read “Light weight 1965 Plymouth in Decatur, Illinois, $3600.”

Walt was a former broadcast programmer at the Lynch Road Assembly Plant in Detroit but had relocated to Granada Hills, California. He knew quite a bit about these cars and even had a product planning document showing how they were to be assembled compared to a normal Belvedere. From the first time he saw one of these cars in the 1960s he had wanted one.

Walt started collecting A990 pieces in about 1968, and it almost became an obsession with him. Within a few years he had N.O.S. carbs and an intake manifold, and a set of Bart Kenyon cylinder heads. By the mid 1970s, he had the A990’s distinctive exhaust manifolds/headers and the complete exhaust system, but finding a clean, uncut car was challenging.

Upon seeing the ad, Walt called the owner and asked for more information about the car. He asked him to read the numbers off the VIN tag: R051, which denoted a Belvedere Super Stock car; 82 for Race Hemi; and 5 for the TorqueFlite. Walt also learned that the all-important Corning glass was still in the old Plymouth. Other than the original drivetrain, the car was fairly intact.

Walt tried to contain his excitement and sent a few hundred bucks by Western Union to the owner. He sent his brother Bruce, who lived in Ohio, to go out and see the car. Upon arriving, Bruce confirmed it and told Walt the good news. It was the real deal, so Walt flew back to Ohio and borrowed Bruce’s 1969 440 Road Runner with a trailer to pick it up.

After getting it back to his brother’s, they went over it thoroughly. The car had been converted to a stick, and the original 8 3/4 rear had been replaced with a Dana 60. Once back in California, Walt started buying Plymouth-specific parts to restore the car. His collection of N.O.S. parts became huge.

Over the years, Walt struck up a friendship with Scott Tiemann of Supercar Specialties. Scott has been responsible for restoring some amazing cars—not only pretty cars, but fast as well. Another of Scott’s clients is Rick Mahoney, who owns quite a few cars that have competed in the Factory Appearing Stock Tire (FAST) and Pure Stock Drag Races. Scott introduced Walt to Rick, and a friendship was made. Walt realized that the car deserved a first-class restoration, and since he was retired, this most likely wasn’t in his budget. So he gave Rick the opportunity to purchase the car. The deal was struck, and the mother lode of N.O.S. pieces was delivered to Supercar Specialties. The best pieces were selected for the car and the rest were sold off.

When Walt was looking for a car to restore, he tried his hardest to find one that had not been tubbed. While this car had never been, when it arrived at Scott’s shop they realized Bonneville’s salt had not been kind to the inner fenders. So some pieces of the floor pan and both rear wheelhouses were repaired. The car does not use any reproduction pieces, as everything that was placed on the car was either N.O.S. or an original part that was freshly restored. Scott estimates spending 3,500 hours in getting the old Plymouth back in line (a process we described in detail in “Super Restoration,” Apr. 2015). The body lines are far crisper than when it left the factory, but that’s the kind of restoration that Supercar Specialties creates.

It took about a year in half from when the Supercar Specialties crew started to when the Plymouth was unveiled at the Detroit Autorama in 2014. The crowd loved it! If you would like to check the car out for yourself, it will be on display at the 2018 Muscle Car and Corvette Nationals in November.