There’s No Trailer For This 9-Second Street Hemi GTX!

There’s No Trailer For This 9-Second Street Hemi GTX! 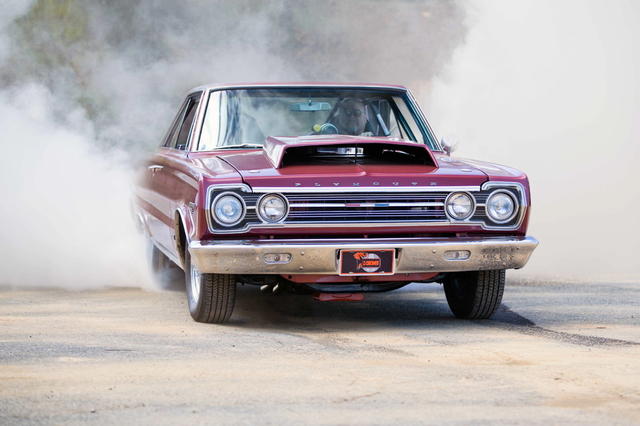 
True car guys will always tell you that they’re never finished with their rides; there are always upgrades on the horizon. Sometimes, an upgrade can mean ditching the current mount to buy something bigger and better. Back in the late-1990s, Brian Fink was looking for such an upgrade. His fixation was with a “big-tire car.” At that point, he was tooling around in a 1971 Plymouth Duster with a warmed-over 340 small-block. It had a lumpy cam, a Holley carb mounted on an aftermarket intake, and a set of headers, but it clearly wasn’t a weapon of mass destruction. That aside, Brian really liked the Duster; you could almost say it had become a member of the family. That attachment made saying goodbye difficult, but when the decision was made to look for a car that was further along in the performance ladder, the A-body was sent to a new home with some regrets.

His mind was set on having a Pro Street car, so all options were put on the table, and as he recalls, “I was open to other cars, as long as they were Mopars.” When the 1967 Plymouth GTX came into the picture in 2001, it was indeed further along. It had a full rollcage, and the rear was already back-halved with a four-link setup and a narrowed Dana 60 rear, which fulfilled his primary desire, and as he points out, “I fell in love with that body style, and it was tubbed.” It also came with a well-massaged 440 big-block backed by a 727 Torqueflite that was a huge improvement over the 340 in the Duster. The guy who sold him the car was responsible for much of the work that had been done to it. He, too, needed to send the GTX to a new home. His son had a freshly minted driver’s license and he had his eyes set on the GTX. For fear that the lad would kill himself at the wheel of the car, it was sold off.

Like a kid with a new toy, Brian started using the GTX regularly, which meant doing some shows and, of course, some clandestine street racing. He also hit the track with it numerous times where it laid down consistent high-11-second passes. As with the Duster, it didn’t take long for the bigger-and-better syndrome to set in, and in the Mopar world, it often means one thing: a Hemi. The opportunity to get one at a decent price fell into his lap in 2004 when one of his buddies embarked on a ground-up restoration of a 1970 Hemi Super Bee. It had a 1968 date-coded 426 and he was looking for a 1970 block and a set of heads.

The Hemi purchase fulfilled the desire to take things to the next level, but the reality of the financial needs for what he wanted was much larger than he was ready for. Running his business and supporting a family meant that large sums of disposable income didn’t fall out of the sky. For a number of years, the 426 sat. Nonetheless, it didn’t mean other things weren’t getting done to the car. The interior was upgraded with the installation of new front seats found at the Carlisle swap meet; the rear setup was also freshened with a Detroit locker spool.

Unfortunately, not everything always moves forward in a linear fashion. At one point, it was sidelined for a long stretch when it was damaged at his shop. Brian’s buddy had his truck parked inside, and he mistakenly let his foot slip off the clutch pedal, which launched the truck directly into the back of the GTX. The outcome wasn’t pretty. It ended up being sandwiched between static shop equipment and the front of the truck, with extensive damage at both ends of the car. Since parts for 1967 Plymouth’s aren’t the easiest to come by, and dealing with clueless insurance companies can sometimes have its difficulties, tracking down good replacement pieces became a challenge, with the trim items being the most difficult to find. They were eventually found and the car was repaired, which set it toward its next chapter.

That chapter started when he was ready to have the Hemi done. Brian’s goal was to crate it up and send it off to Ray Barton Racing Engines. They know a thing or two about getting power from the Hemi, and he was looking to get as much as his pile of cash allowed. The foundation was the 1968 block and heads, but everything else would be fresh, right down to the stroker crank that pushed the displacement to 492 ci. The Barton crew did all the machine work on the block and heads, and when it came time to spend some of the money he had saved up, things like the magnesium intake and Barton valve covers were on the must-have list.

The entire process dragged out for almost two years until it was back in his shop. Along the way, there were recurring mechanical issues when the engine was put on the dyno, which they eventually solved. Once they were able to get a good pull, it yielded 610 horses at the crank at 5,400 rpm and 750 lb-ft of torque, which Brian estimated would drop him below the 10-second mark.

With the Hemi ready to drop into the engine bay, he sent the 727 Torqueflite out for a full rebuild, which included internal upgrades to handle the additional power. He also realized that the need to stop was actually more important than going faster, and drum brakes were the weak link in the equation, so a Wilwood disc-brake setup at the front was installed, with plans for the rear at a later date.

Once everything was buttoned up on the car, Brian wasted little time before taking it back out on the street and giving it a good shakedown at the track. So far, he has clocked a 9.30 time at 143 mph, which is a vast improvement over the 440. Looking forward, most of the heavy lifting has been done on the car, and Brian regularly takes it out on spirited drives and squeezes as much enjoyment as he can. He’s also fond of pointing out that it is not a trailer queen and is officially a member of the family—one we don’t think will be sent packing any time soon.

Engine:
The 426 Hemi tucked between the fenders in the GTX originally came out of a 1968 Mopar, with the block and heads sharing the same year of manufacture. When Brian shipped it off to Ray Barton Racing Engines for the rebuild, he decided to go with a stroker crank, which pushed the displacement to 492 ci. Along with that new forged steel stroker crankshaft, they also added new H-beam connecting rods and Diamond 10.5:1 forged pistons. The Hemi cast-iron heads were also gone over and treated to all new valves, springs, and titanium retainers, while a Ray Barton custom grind was dropped in. Exhaust duties are handled via a set of TTI headers.

Induction:
A Ray Barton Magnesium cross-ram intake adorns the top of the Hemi, along with a pair of Holley 770 Super Stock Hemi carburetors. This intake choice is very robust and easily supports 800-plus horses without any porting.

Electronics:
Spark production and distribution for the 492 Hemi comes from an MSD Blaster HVC II coil wired to an MSD Pro-Billet Distributor. This type of MSD distributor has been designed for use with aftermarket valve covers like the ones from Ray Barton Racing Engines.

Fuel:
Brian keeps the hungry Hemi fed with Sunoco Standard leaded fuel rated at 110 octane, which he purchases by the drum.

Transmission:
A 727 Torqueflite handles shifting duties on the GTX. Brian had his friend Nate Berk in Schnecksville, PA, do the work on the automatic. He installed a TCI 8-inch converter with a 4,500-stall speed. Other improvements include a reverse manual valvebody and upgraded race clutches.

Rearend:
The choice of a rear didn’t stray in the Ford camp. When Brian purchased the GTX, it was already sporting a narrowed Dana 60, which he opted to keep. He took out the spool and installed a Detroit Locker unit with a set of 5.13:1 gears.

Chassis/Suspension:
The rear of the GTX has been back-halved and uses a four-link setup with QA1 coilovers, while the front still retains the stock 1967 Chrysler torsion bars. The manual steering box is also vintage 1967, but has been mated to a Flaming River steering column.

Brakes:
When Brian purchased the GTX, it was wearing the stock drum brakes at all four corners. The installation of the 492 dictated that better stopping was needed, so up front the drums were replaced. A set of Wilwood spindles, rotors, four-piston calipers, and a Wilwood master cylinder were installed. In the pipeline is a switch to rear discs in the near future.

Paint/Body:
The body on the GTX wears a 1967 color called Turbine Bronze Metallic, which is the original shade it rolled out of the factory in, but it has had a re-spray over the years. When Brian purchased the car, the hood and trunklid were both fiberglass lift-off pieces, which he has since partially changed back. The hood is still fiberglass, but it has been put on hinges and the massive scoop added.

Interior:
The back seat gave way to the massive tubs that were installed, along with the rollcage. The original front seats were still in place when purchased, but were eventually replaced. The replacements that are now installed were purchased at the Carlisle Fairgrounds swap meet. They are a no-name brand that, according to Brian, “really looked good and are quite comfortable.” Other additions also include the Simpson five-point harnesses, Cheetah SCS shifter, and AutoMeter Sport-Comp tach. The dash is still in its original configuration, minus the original AM radio.