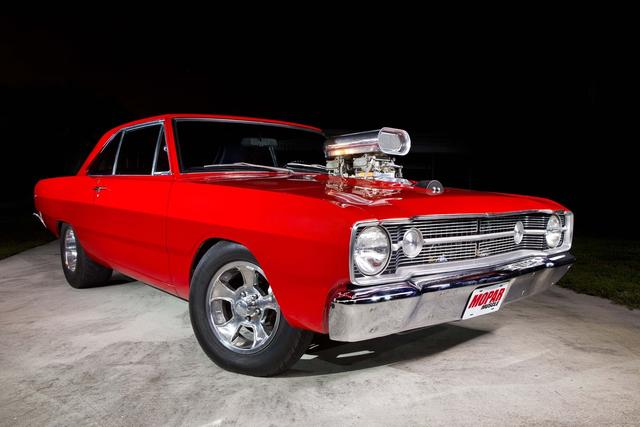 
You have to give the young guys of Bob Welling’s generation a lot of credit. While Detroit unleashed muscle on America, he was among the tens of thousands of guys in Vietnam as a U.S Marine. The honor they deserved took decades to become evident thanks in part to those who wouldn’t serve back then, but today real Americans honor that great sacrifice. Before he headed over for his service, a trip to the newly opened Palm Beach International Raceway in southern Florida had sealed his love for power.

“The track had opened in 1965 and we went,” he recalls now. “Right away, I was awestruck at how dominant the Hemi engine was. Now I was still a Chevy guy at heart, so as soon as I got back from Vietnam, I bought a ’66 SS396 Chevelle, but within six months I had traded that in on a 1969 383 cubic-inch Road Runner. I was actually looking to replace the Chevelle from those days when the Dart came up in 2014.”

As many know, the Dodge Dart’s most vicious legacy came in 1968, when Tom Hoover and his crew at Chrysler Engineering launched their own all-out land invasion. The largest street engine available at the 1968 introduction came in the GTS, a 383 model. Later that same model year, Mr. Norm Krause had a short batch built with 440 power, but the Hemi-powered examples would be the trend setters. Created and developed with the idea of fitting exactly into the NHRA weight break for SS/B (6.00-6.49 pounds per horsepower), incomplete 383 Darts went to subcontractor Hurst Industries for modifications solely for racing. This included lightweight body parts, spartan interiors, drag-strip only drivetrains, and the final factory release of the legendary cross-ram Race Hemi. Due to the weight requirements, the engine was fairly straight forward, with a stock cam, heads, and oil pan, knowing the racers would do their own things to get them ready for action. The Hurst changes meant the cars were no longer highway legal, and a disclaimer stating this was part of the sale.

These 80 or so cars and a similar group of sister Barracudas dominated the highest echelons of the sport for years. Today, the originals have left their own street legacy thanks to cars like the one Bob would purchase decades later, a tribute design that featured a Hemi engine conversion. In this case, a later Mopar Performance 472 cubic-inch crate engine and some of the other changes the cars received had been added. Though the body itself was still all-steel, the turn-key car represented those glory days of Bob’s past.

“I had a 2009 SRT Challenger that I was already drag racing twice a week at Palm Beach International Raceway,” he says. “The Dart was not going to be a racecar; it would be my street car.
I always wanted a Hemi, and this would get that out of my system.”

The biggest problem upon purchase was some irritating piston rattle during warm-up. That was one reason why Bob had his mechanic friend Kenny Morrison, owner of K-Tech Automotive, Inc. in Loxahatchee, Florida, take a look at it. In turn, Kenny took Bob for a ride…

“Yeah, he had this supercharged ’56 Chevy with a big-block in it,” Bob laughs. “In fact, every car he has is supercharged, even his motorcycle, so he talked me into it. Actually, he took me out for a drive, and I was convinced on the idea of the blower right way!”

Blown street machines have always been a special breed. Kenny actually owns a blown ’34 Plymouth and a blown Hemi Willys as well—all street cars developed with the idea of keeping it simple. Overdrive is kept at a minimum and compression can be set as high as 10:0:1; the ’56 is his daughter’s car! Once Bob had pulled the trigger on the project, Kenny took the engine out of the Viper Red car, took it completely apart, and began reworking it. Nothing radical.

“If you build them right, these cars are 100-percent drivable,” Kenny told us. “Since I was a kid, I always thought they were cool, and loved the look of them, so I’ve always been a blower guy. For Bob, I just wanted to build him something he could get in, hit the key, and go.”

A blower-friendly cam design and a set of 10.0:1 Diamond pistons were the only major things actually swapped out, then the Hemi was carefully reassembly before being capped off with the Hampton 8-71 Roots-design huffer now coming up through the engine bay. Since the car retained the steel hood, that proved to the only major issue.

“We took the Super Stock scoop off it and redid the hood,” says Bob. “Kenny needed to cut it and weld a lip around the opening. Due to the additional amount of iron Chrysler used in their sheet metal, it’s not like doing some of the others. It wanted to bend and flex every time the welder hit it. That was really the only issue we had doing this build-up.”

Of course, throwing a blower on a Hemi can find weaker links throughout the driveline. During the year the car was worked on in the shop, K-Tech removed and narrowed the 8.75-inch rear and mini-tubbed the car for a 12-inch tire. This would give some semblance of traction, though Bob admits that if you get on it even at 50 mph, it just goes sideways. A 3.55 rear gear provides a nice balance for power, and Kenny added a 3,200-stall converter and reverse-pattern valve body to the A727 Torqueflite as well. Wheels are chromed five-spokes by Rocket and wear Mickey Thompson rubber on all four corners.

There were a handful of other chassis mods—subframe connectors to tie it together, and the rear springs were moved inboard for clearance. Strange came through with replacement front disc brakes, a better choice than retaining the anemic factory discs. Meanwhile, chrome under the hood gives the car show appeal, though it is not excessive. A Be Cool radiator keeps it chilled, while a K&N filter is in the large-opening hood scoop to keep the bugs out. The crate motor’s pair of 77-cfm Holleys were dialed in and reinstalled beneath it.

We noted the car was done when Bob got it from Streetside Customs in Atlanta, where it was on consignment. The interior is similar to the race-bred originals, though it retains the window cranks for ease of operation. A handful of gauges monitor the engine, but the reskinned low-back bucket seats and factory dash layout from 1968 are still there.

Bob sold his race Challenger and now enjoys the Dart strictly as a show car, taking in at least two events a month in the Atlantic coast towns near home during the show season. When asked if he planned to race this car, he laughed again. “No, it’s really a street cruiser. If you were to try and get it to really hook up, it would probably blow that rear end apart. This is ok; I wanted something different but it still is like the Hurst Darts. I like it this way.”