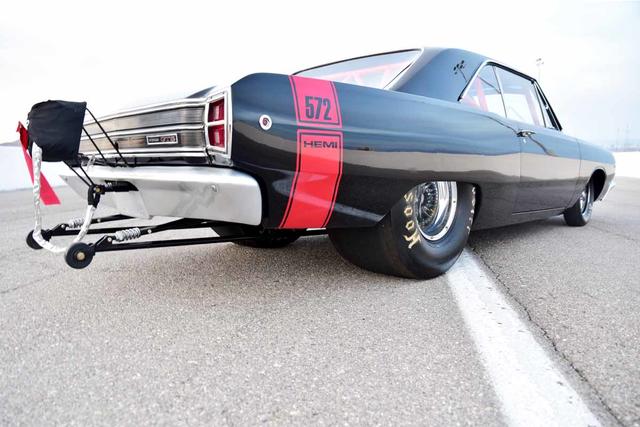 
Muscle cars and drag racing have been a staple in the American culture for over half a century. It quickly caught on around the world where American muscle cars were being purchased at premium prices in countries such as Japan and Sweden. That same can be said for the Sandin family of Hermosillo, Mexico. Their love for American muscle cars started deep into the muscle car era and has remained ever since. From day one, their love of muscle cars remained solely to one brand, Mopar.

In 1974, Marco Sandin’s father bought a Dodge Dart Sport, but in Mexico it was called a Super Bee. That’s where the love for Mopars and drag racing began for the Sandin family. In the summer of 1980, Marco’s father purchased for him a 1976 Dart Sport, which later would become his first “drag car.” Marco didn’t modify this car and struggled quite a bit at the drag strip. He later realized this car wasn’t going to cut it if he was going to try and be competitive, so he purchased a ’74 Dodge Dart Sport with a 340 and a four-speed. He nicknamed the Dart, “El Mantenido,” and successfully won nearly a dozen races with it. But again, due to financial needs, he was forced to sell it.

In 1989, Marco acquired another Dart Sport–this time a 1973 model that is still in the family today, being campaigned by his son, Marco Jr. Eleven years later, Marco picked up a 1972 Dodge Dart Swinger, which he raced throughout Mexico and Arizona. In 2010, he gave this car to his youngest child, Alex, which he also still campaigns. Finally, in June of 2013, Marco found his 1969 Dart GTS, which he later dubbed, “Black Mamba.” He and his good friend Fernando Grijalva tore the car down and replaced every nut and bolt, and the final product was a black and red “pro street” style car that was capable of winning awards both on and off the track. Black Mamba took two years to complete, and driving duties were handed over to Marco Sandin Jr.

The engine of choice for Marco was a big naturally aspirated 572 cubic-inch Chrysler Hemi built by Dennis Maurer of Maurer Performance in Tempe, Arizona. It features an aluminum Keith Black block, Callies crankshaft, and Oliver billet rods. Maurer finished out the rotating assembly with custom ground CP lightweight pistons and Total Seal rings. A custom-ground Cam Motion roller camshaft and Jesel belt drive were also installed to give the Hemi one nasty-sounding idle. Arguably the most noticeable feature are the hemispherical heads–it draws crowds everywhere.

Ignition of choice? All MSD! A popular yet proven set up for many bracket racers was installed on the Dart: an MSD 7AL3, HVC blaster II coil, plug wires, and Pro Billet distributor wired together with a Dedenbear delay box for running the Super Pro electronics classes. A complete re-wire was also completed utilizing color coded wires and quick disconnect for ease of changing out components.

To continue the Mopar theme, Sandin went with a beefed-up 727 TorqueFlight transmission built by Rick Allison at A&A transmission. Transferring the power is a 9-inch Transpecialties 3500 stall speed converter, and a C02-charged Precision Performance Products shifter. The chassis is a traditional four-link coilover, true back-half with full funny car-style cage. Marco purchased and installed a complete Chris Alston’s Chassisworks sportsman chassis kit complete with a Strange Engineering driveshaft, Vari-shock front shocks and springs, and Koni adjustable rear shocks and springs. The narrowed Ford 9-inch rearend may be the only non-Mopar component on this car, but Marco mentioned to us, “the Ford 9-inch is simply the best on the market.” The bulletproof rearend is loaded up with a Strange spool, 4.56 gears, and 40-spline gun-drilled axles.

Clean with a factory appearance was the direction Marco wanted to go with the Dart. With that in mind, the body is all steel except for the AAR fiberglass hood, trunk lid, and front and rear fenders. Efrain Sepolvida of Hermosillo painted the Dart with five stages of Ultra Black and a red tail stripe with “572 Hemi” inscribed in it. And let’s not forget, the all-important Simpson parachute out back giving the added safety and a little “curb appeal” to go with it.

Arguably, wheel choice can make or break the appearance of any vehicle; this wasn’t a problem for Marco when he bolted on a set of Weld Racing V-series hoops wrapped in Hoosiers all the way around.

The interior of the car is just as immaculate as the outside. Continuing with the overall red and black theme, the floor has been powdercoated black to contrast the red roll cage. The dashboard was custom designed and the door panels were fabricated in carbon fiber with all functioning locks and windows. Safety is top priority for Marco, and two Kirkey aluminum race seats were installed, complete with matching five-point harnesses. To date, the Black Mamba has run a best of a 9.20-second elapsed time at over 141 miles per hour and a 1.27 sixty-foot time.

The Sandin family has run some big events out West that include Muscle Cars at the Strip and the Spring Fling Million, and have been known to go some rounds in all their cars. Most recently, Black Mamba won “Best of Show” at the annual “Muscle Cars at the Strip” event. The Dart as well as the rest of his family’s collection of Mopar’s currently reside in Marcos hometown of Hermosillo, Sonora, Mexico. Marco considers Tuscon, Phoenix, and Las Vegas his home tracks for now. Currently, there are four “known” drag strips in Mexico with another one in Sonora being built. “Drag racing is very much alive in Mexico, and growing rapidly,” according to Marco.

“I am very thankful for all my family and my teammates at Sandin Racing, and especially to my father, to which none of this would have been possible without him,” Marco, Jr. says. “We are Mopar guys and the Dodge Dart was a symbolic muscle car throughout the 1960s. We’re very passionate about our cars and are glad we are able to share in that same passion with others.”