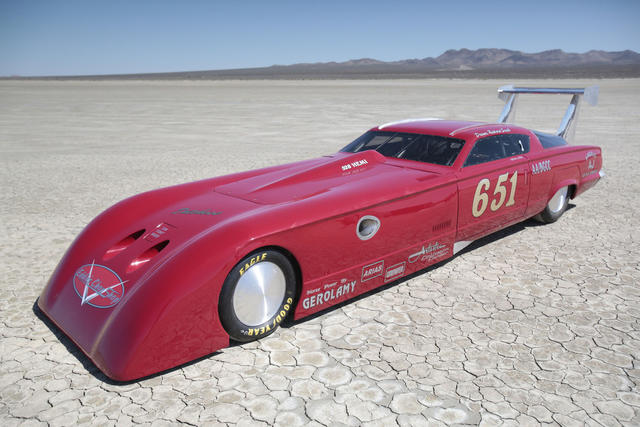 
Richard Smith has always been a Mopar guy, and after having Ed Umland from Eddie’s Chop Shop build him a hot rod, it was only a matter of time before he caught Ed’s land speed racing fever. All it took was a couple of trips to Bonneville as a member of Ed’s crew before Richard had schemes of a land speed car of his own.

As a fan of Stupidbaker, the Johnson Hot Rod Shop 1953 Studebaker, Richard knew he’d want a Competition Coupe. The long cars have an interesting look, and their size, plus their fullsize doors, makes them more user friendly than a smaller streamliner. Initially, Richard was leaning toward a 1950 Plymouth, but Ed was able to steer him into a more compact 1965 Barracuda.

The car would need good aerodynamics, which dictated how the front would look, to a degree. The long wheelbase is partly a class requirement and partly a packaging benefit, allowing for a large engine and its turbo plumbing. It also helps move the car’s center of gravity in front of its center of pressure. The long body and the rear wing, especially the uprights, help move the center of pressure rearward. Ed says that as a general rule, a minimum of six inches between the car’s center of gravity and center of pressure is needed, but the greater separation, the more stable it will tend to be at speed. Imagine throwing a dart; if the heavier portion were at the rear, it would want to turn around mid flight. That’s not something you want to happen at 200mph.

Testing at the Darko wind tunnel in Ogden, Utah, helped determine the car’s overall drag so that the team could determine how much horsepower they’d need to reach a certain speed. It also helped in tuning the wing to get downforce without too much drag. Ride height sensors on the car are used to track how much the car squats. Based on the numbers from the wind tunnel, Ed expected to see the car settle a little bit at speed, although the car’s initial testing at El Mirage indicates it’s making even more downforce than the wind tunnel indicated.

Ed shaped the front of the body using .060-inch 3003 and 5052 aluminum over a skeleton of tubular aluminum. Ed didn’t use a buck and the aluminum required no annealing, just shaping with an English wheel, a shrinker, and a stretcher. Competition Coupe class rules require that from the A-pillar back, and from the glass down, the body must remain as it left the factory. Chopping the top is fair game, so the roof came down, but the sheetmetal at the base of the rear window was left untouched. The area where the window transitions to the trunk has a big angle change. Data from the wind tunnel and the dust from El Mirage prove that there’s a dead spot in the airflow there, but there wasn’t much Ed could do about it.

Since he is a Mopar guy, it had to be a Hemi powering Richard’s land speed endeavor. The engine started with an iron block from World with a 4.4375-inch bore and a 4.25-inch stroke from a Callies Dragonslayer crank using Oliver rods and Arias pistons. Topping it off are the biggest Indy heads they could find that still had water passages. There are bigger, badder cylinder heads out there, but they’re made for Top Fuel nitromethane engines that don’t have any sort of water cooling. That just wouldn’t work on an 8-mile long run on the salt at Bonneville.

AA class is for engines 500ci and larger. Richard and Ed decided 526ci was a convenient displacement to reach using common big Hemi parts. Ed wanted to err on the side of having a small engine, as much as a 526ci Hemi is small, as it’s difficult to keep big engines alive at high rpm for the prolonged times involved in land speed racing. The added benefit of the reasonable displacement is that it keeps the bores thicker for stability, important when the boost from twin 88mm Pro Mod Precision turbos pours into the cylinders.

The first tune Ed has cooked up for the Hemi adds a conservative 15 pounds of boost and showed more than 1,400 hp at the wheel. Based on the car’s drag, that should be enough power to get past 300mph.

Again, Richard’s wish list of speed parts helped determine the direction of the drivetrain. It just so happened that Richard has good taste in parts, because the Lenco five-speed and Winters Extremeline quick change rear axle are just what the big Hemi called for. The 2.0 ring and pinion will allow just about any ratio between 2.0:1 and 3.0:1 and the Lenco allows the engine to stay in its sweet spot for the duration of a run.

On the car’s initial runs at California’s El Mirage dry lakebed, Richard noticed a shake from the front end. Ed built the solid front axle and kingpins himself, and tried to eliminate any slop; everything looked fine. It turned out that one of the front wheels had not been balanced by the tire shop. A trip into town fixed that and Richard made several passes to feel the car out. El Mirage is a dry lake, but when it’s not dry, the surface of the lake collects dust blown by the wind. That fine dust finds its way everywhere, and any opening in the car’s body is a potential entry point. On two consecutive runs Richard had to pull the parachutes as dust in the cabin obscured his vision. Some investigating lead to areas in the trunk where dust was getting inside. Once those were sealed up there was still dust in the car, and that proved to be a problem for an additional run, Richard got seat time and by the time the ECTA was making licensing passes the following day, Richard made a solid licensing pass by maintaining a 146mph speed through the traps, keeping under the 150mph maximum speed. Ed noted that run never showed more than 30 percent throttle opening and required only 10 percent throttle to maintain speed for the bulk of the run.

At Bonneville, Richard will have to make several licensing runs early in the week, and with luck, will have a shot at the AA Blown Gas Competition Coupe record, of 246.301mph currently held by former HOT ROD Editor in Chief David Freiburger. Eventually, Ed has his eyes on the AA Blown Fuel Competition Coupe record as well, currently at 292.288mph.

If nothing else, it certainly has to be one of the coolest land speed cars ever created, yes?
Scott Moseman
http://www.TheHEMI.com/
Follow us: