572 HEMI GTX With a Stick is the Perfect Driver!

572 HEMI GTX With a Stick is the Perfect Driver! 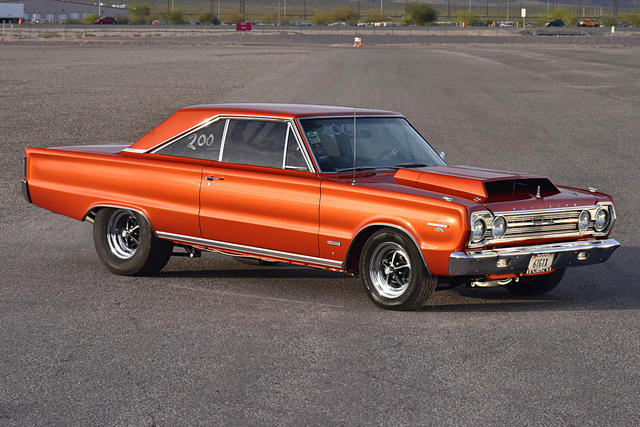 
There’s an old saying out there that people like to repeat. The most common variation is, “you can’t go home again.” In many cases it may be true but when applied to the 1967 HEMI-powered Plymouth GTX of Alberta, Canada’s Bruce Erickson, it falls completely apart. Erickson’s car is not only a trip home mentally but also physically to the start of a love affair with cars and things mechanical. We’re guessing every time he hits the key and fires up the 572-inch HEMI he feels the same way he did in 1967 when he signed the papers to own a car that would ultimately shape his automotive tastes and interests for years to come. But we’re skipping ahead.

“Bruce planned on making his first new car purchase a 1967 Charger. Then a funny thing happened.”

The Mopar hook was set for Bruce Erickson as a kid. He was attending a parade in 1965 and his eyes feasted upon a then brand-new Valiant convertible that had the high-performance 273ci small-block and four-speed manual transmission. The look and the sound of that car set the wheels in motion, and as he scraped and saved his money, Bruce planned on making his first new car purchase a 1967 Charger. Then a funny thing happened. The GTX model was introduced and while it may have cost him a few more bucks, Bruce bought himself a 440ci, four-speed car in white with black stripes. For a short time, all was right with the world.

“There were six of us in the car, my buddy was driving, and we were going about as fast as that car would go…The motor blew up during that fiasco.”—Bruce Ericksen

We say short time because in the span of a year, Bruce had gone through two engines. The first one went out with its boots on, “We were in a bit of a high-speed pursuit you could say,” Bruce said with a laugh. “There were six of us in the car, my buddy was driving, and we were going about as fast as that car would go. It had slicks on the back and everything. The motor blew up during that fiasco.” As you could imagine, this type of news gets around, so when the car was brought to the dealer for an engine replacement, the dealer refused to warranty it. Thankfully, Bruce’s dad bought an engine for him from the local Chrysler parts house and after swapping it and learning a valuable lesson, Bruce was taking things a bit easier on the car. Then a second disaster struck when the factory block heater fell out of the engine while he was driving, and that led to the replacement engine being toasted. As an apprentice equipment mechanic, Bruce had the skills to fix the car, so he did, then promptly traded it in on something that he figured would not give him the issues that the GTX had.

For the next four decades, Bruce spent his time being a family man and a businessman, building a successful name as a John Deere dealer and admiring those muscle cars of his youth from afar. It was a long way from the parade that had gotten him so riled up as a kid, but while the flame may have flickered a few times, it never went out. In 2006, Bruce decided to attend the Barrett-Jackson auction in Scottsdale, Arizona to take in the action. That had the same effect on him as that parade did so many years ago, and while didn’t buy a car at the auction, he set about looking for a GTX to call his own again.

“The car I bought was far rougher than I thought, from the information I was dealing with,” Bruce said. Due to the fact that the car was going to need a complete transformation to get it to the condition Bruce was looking for, he actually built a shop before getting the car started. “I built a big 36-by-50 shop when we were living in Prince Edward Island so that I had lots of room to work on the car. It was a multi-year process to get the result you see today.”

One of the parts of the process that didn’t give Bruce too much in the way of headaches was the masterful bodywork done by the late Gerald Profit. He’s responsible for the fit and finish, the color, and the aesthetic beauty of the big ’67 GTX. “I met Gerald in 2006 and he was just an awesome guy who turned out fantastic work. This car really is a testament to his skill.” The paint color is the same used on the limited edition ’05 Dodge Viper Copperhead. The orange paint has that amazing copperhead look under the right light. This GTX is a real stunner.

With the bodywork done and the car painted, it was now time to turn attention to the engine bay and what would be powering the GTX. This is another interesting twist to the story. Bruce turned to his friend Frank Kirchner to do the work. As it turns out, Kirchner was the guy who happened to be driving on that night back in 1967 where the original GTX’s engine expired during the high-speed pursuit! Additionally, Kirchner had a career in drag racing, piloting the Canadian-based Automatic Radio funny car in the mid-1970s, actually replacing the legendary Gordie Bonin. “I had originally intended to keep the car 440-powered but Frank told me that for the money we should do a HEMI.” Things got immediately more serious from there.

“Rather than hunting down a stock block, an Indy Maxx aluminum piece was used. This water-jacketed beauty would keep weight down in the front…”

Rather than hunting down a stock block, an Indy Maxx aluminum piece was used. This water-jacketed beauty would keep weight down in the front end and also eliminate the possibilities of having to “save” a factory piece with an unknown history before entering the shop. The build moved ahead with a load of stout parts like a stroker Callies crank, Eagle rods, a Crane cam, and 10:1 compression Diamond pistons. The heads were some of the first of the Mopar aluminum pieces to be offered and unfortunately a valve seat failure put a premature end to Bruce’s fun with the car, but it did not destroy the engine. “We got lucky in that when the valve seat came out it did not make a really big mess,” he said. “Rather than repair those and have it nagging in the back of my head that it would happen again, we went with a set of Stage V heads and they have been great,” Bruce confirmed. We’d have to agree, as the car makes 732 naturally aspirated horsepower and 717 lb-ft of torque.

Even with all the horsepower and the rowdy nature of the engine, Bruce did not want his ’67 GTX to be relegated to dragstrip duty only. He wanted to drive the car, and in order to do that comfortably he went with a basically stock interior. Legendary Auto Interiors was tapped to get the inside of the car back into the same shape it left the Plymouth factory in. Stock bucket seats provide the perfect place for Bruce and his passengers to relax in as they cruise. And cruise Bruce does. This thing gets driven a few thousand miles a year and since reliability is also part of the program here, the components under the car and behind the engine needed to stand up to the grunt.

“The automatic could not stand up to the power so I swapped it for a Passon 855 manual transmission.”—Bruce Ericksen

“I had an automatic transmission in the car when it was first completed, but that turned out to be a mistake,” Bruce said. “The automatic could not stand up to the power so I swapped it for a Passon 855 manual transmission. The Passon is great because it can stand up to the engine and it is a five-speed. The first four ratios are identical to an A833 and Fifth gear is a .70 overdrive. With the 4.30 gears in the Drivetrain Specialties Dana 60, I can cruise at 2,350 rpm at 70 mph down the highway.” The leaf springs were moved inboard on both sides of that big Dana rearend, and along with a set of CalTracs bars and subframe connectors, this GTX was modified to hook hard.

Remember when we talked about going home again? While this car was being built, painted, and finished, Bruce and his wife lived in beautiful Price Edward Island, Canada. After it was finished they relocated back to their native Alberta, and they did it with the ultimate dream version of the car that he first fell in love with. “I guess I have returned to my roots,” Bruce said. We agree and he did it with a screaming 732-hp HEMI helping to guide the way. You truly can go home again.

This is a gorgeous car!