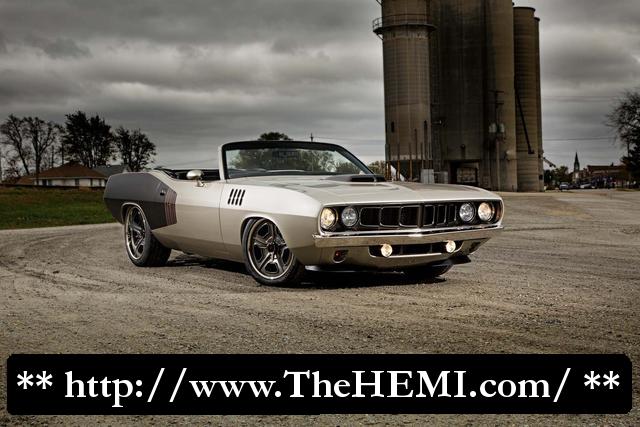 Roger Byrd’s 1971 ’Cuda is everything you’d expect out of a Rad Rides build. It has beautiful, custom bodywork, an amazing interior, and an engine bay that’s a work of art. Most importantly, it works as a car should. When that car is one of Mopar’s crown jewels from the muscle-car era, it has to bring big power with a big-inch V8, and Roger’s car certainly doesn’t disappoint there, either.

Starting with a beat-up donor car, the Rad Rides crew cut out the rotted floors and replaced a few other bits of mangled metal before the custom work began. The bumpers were cut up and tucked into the body and a new tail panel and air dam were built from scratch. The overall lines were left intact—it is a ’Cuda after all. The only additional exterior modification was the deletion of the marker lights. They got shaved before the body was prepped and sprayed with Smoke Silver paint from Glasurit, a factory Mercedes color.

The natural choice for a ’Cuda is a Hemi, and this one has an appropriately elephant-sized 528ci that started with a Keith Black block. It was machined by FX Engines and uses a Mopar Performance crank, CP pistons, and Manley rods. The short-block is topped with Stage V heads and an intake from Ray Barton, who assembled the engine. An Aeromotive fuel system feeds high-test gas to the Ray Barton EFI intake that uses BigStuff3 tuned by Dale Cherry at Injection Connection to concoct the right mixture for the big-bore engine. Its dyno-proven 651 hp at 6,500 rpm is plenty for the lightweight E-body to live up to its reputation as a formidable opponent on the street.

I'm not usually a gray/silver fan, but this 'Cuda looks slick!
Scott Moseman
http://www.TheHEMI.com/
Follow us: