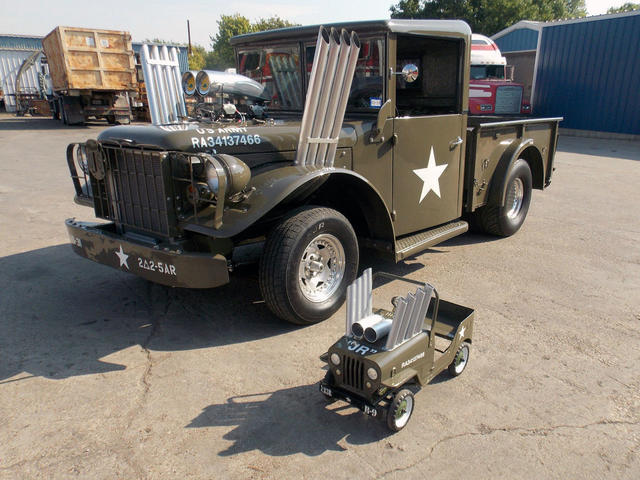 
I have to say that I actually admire guys who have the vision and the means to actually dream up a freaky build and then pull it off. For instance, the guy who funded the construction of this wild 1962 Dodge M37 Power Wagon says in his eBay ad that he has something like $125,000 tied up into the thing. It would be tough to refute that once you start looking at stuff like the engine, which is an aluminum block, supercharged semi that comes in at about 570ci. If you then turn your attention to the body you will see the extensive work and modifications that also soak up money like a sponge and we have not even gotten to the under pinnings of the thing which were all custom built. While $125,000 seems like a ton, we just spent it (or damned close) in about 10 seconds.

We’re not sure why they decided to go with the cartoony exhaust stacks rather than an exhaust system on the truck. If they had gone with a traditional exhaust we think it would look cooler. Those big pipes sticking out have a weird rat rod type of vibe whereas the rest of the thing is finished to a very high degree and we just don’t see those things as fitting with the motif. It likely sounds as though the end of the world is coming while barking out of those pipes but they just don’t do a whole lot for us stylistically.

Among the interesting things to note regarding this pro street freak are the fact that the power says that it was used in Vietnam, it has a Dana 60 out back with 4.11 gears, it has a Gear Vendors ahead of that and a Turbo 400 with a Chrysler style bell housing on it so it would bolt up to the engine. The seller claims that the engine made 1,450hp on guy’s dyno, he has a 32-gallon gas tank, and that the whole thing is very steerable and like to be driven.

While we don’t hate the truck as it sits we would change some stuff in a hurry. The weirdo zoomies would go in favor of a more traditional exhaust and the front tires would get dumped in favor of some legit skinnies. The radials and aged wheels don’t rally jive with out tastes. Would you change anything if you bought this thing? We’d like to have the top off and cruise around with the sun shining down on us. Fun right?