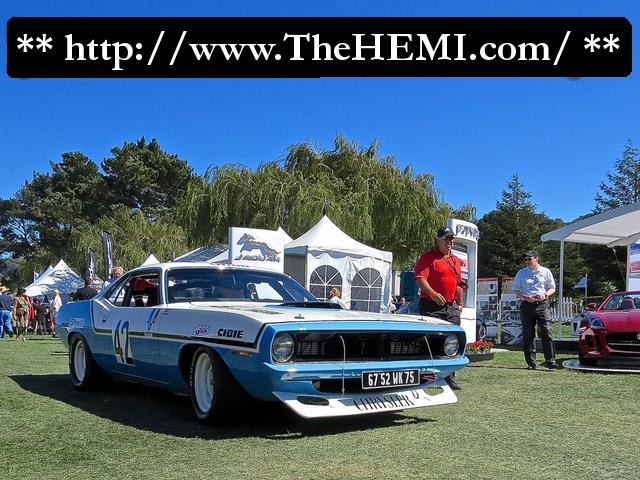 
Just because we feature a car here on Mind Over Motor doesn’t mean its fifteen minutes of fame should end. A year and a half ago, a 1970 Plymouth Hemi ‘Cuda with Chrysler badges was making its first-ever appearance at the Greenwich Concours, and took home the Chief Judge’s Award last year on its debut. Fast-forward a year, and the ‘Cuda was back in action, after spending a bit of time in France–the country where it made history.

This is not a normal Hemi ‘Cuda. Most of them are designed to look good and race along Main Street between Maple Avenue and Pine Street against a Chevelle SS-454 (and win). This one fought for space alongside Porsche 911 racers and BMW 3.0 CSLs all over France–one of just four E-body Chryslers to ever do so. Nowadays, it’s retired, but it spent time in France on some of its old tracks during the past year or so. I can only imagine the sound of that thundering big-block V8 ricocheting across the French countryside, both getting everyone’s attention and ticking off the locals, who probably would rather not see such a brash American messing around their French roads. I personally wish that it happen more often. Enjoy the photos.

Wow. How often do you see a Chrysler HEMI 'Cuda? This is totally awesome!
Scott Moseman
http://www.TheHEMI.com/
Follow us: