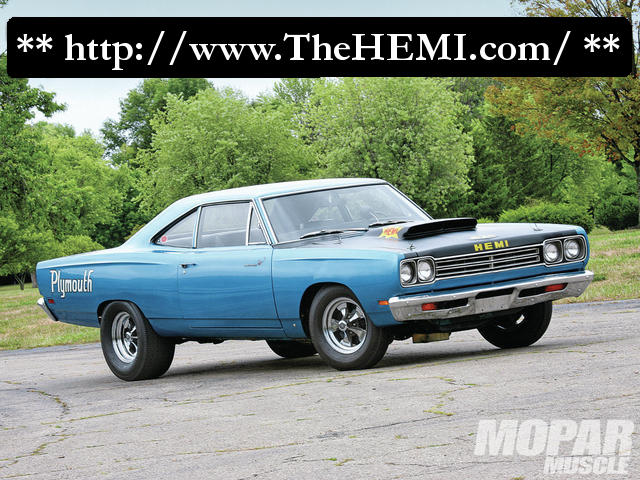 
This 1969 Road Runner is a veteran of Western Pennsylvania's drag racing scene of yesteryear, which didn't always involve dragstrips. Per Ted Brine, the Bird's first—and current—owner, guys raced where they could. "We'd go out on Interstate 79 south of Pittsburgh," he recalls. "There would be 100-120 cars out there at 12:30 at night on Fridays and Saturdays."

In the spring of 1969, Ted wanted to get the lightest factory package he could get. That meant ordering a new Plymouth Road Runner coupe with a 426 Hemi, Air Grabber hood with performance paint, 18-spline and Hurst-shifted 833, Dana 60, and an AM radio—no other options.

Ted ordered it with the 3.54-geared A33 Track Pak instead of the 4.10-geared A35 Super Track Pak, because the latter included power front disc brakes, which added weight to the front end (and another $114 to the sticker price).

Ted raced it for the next year and a half—first on the roads and highways of Western Pennsylvania, and then on the dragstrips. That change came after he started upgrading the Road Runner and its Hemi—after one of the few times that he ever lost, to a past Super Stock & Drag Illustrated Magazine cover car. "About three days later, friends and I yanked the Hemi out and started an all-out rebuild to make the car a whole lot faster," he says. "Not only that, it was also built for NHRA's B/Modified Production class."

Thanks to help from local engine builder Stu Sandhaus, Ted modified the 426 Street Hemi with 13.0:1 pistons, an experimental Chrysler 606 cam, and a set of '65 aluminum K heads with a history. "They were off Dave Koffel's Flintstone Flyer Funny Car," says Ted, who also gave the Bird an A12 fiberglass hood for less weight and to clear the magnesium cross-ram and dual Holleys, and 4.88 rear gears. "It was a really light Road Runner when we finally got it to the track," he adds.

How did it do when he took it to Pittsburgh International Dragway in April of 1970? How about 11.33 seconds at 124.82 mph on the first run! Ted set B/MP class records with it there, and at several other strips, while winning some Modified Eliminator titles and beating some national-record holders that year.

After the 1970 racing season, Ted sold the Bird—less driveline, to move up and build an A/Fuel Dragster. The original Hemi and four-speed were also sold to help fund the new race car.

The Road Runner's second owner, Denny Thomas, had followed it during that season to examine it, and convince Ted of his interest to buy. That deal was finalized in the fall, and Denny installed his own high-compression Hemi, backed by a 727 and 5,500-stall converter. It was raced regularly in the '70s and '80s, and occasionally street-driven or trailered to car cruises into the early 2000s. The Road Runner was treasured by its owner, who became well known around Western Pennsylvania as Hemi Denny.

Unfortunately, "Hemi Denny Thomas"—who, as a DJ, was a mainstay at his local hometown cruise—passed away in June 2009.

In September of 2011, Ted found out—entirely by accident—that his former car was still in existence and was still with "Hemi Denny's" family. After a six-month search and rescue, it was his again—after 42 years. But it needed work, and to make sure it got what it needed, all of Ted's buddies helped out. As he recalls, "It had been pretty much mechanically unattended, but to "Hemi Denny's" everlasting credit, he never, ever did anything to the body, interior, or my race car modifications."

The Bird wore the same B5 Blue that went on in 1969, and much of the race lettering—but virtually no rust, save for two minor spots at the base of the rear window trim. Dave Ley, from the Exotic Car Workshop, was tasked with resurrecting and preserving the original paint. The car looks remarkably good in its 43-year-old patina.

The engine did suffer from years of storage and many years of hard racing. Ted—helped by lifelong friend Mark Becker (who helped him built it in 1970) and Tom Hemphill, from Hemphill Racing Engines—rebuilt the Hemi, using its 1966 block, crankshaft, and rods. "It's real healthy," says Ted, "but it's now a .030-inch over, 10.3:1 compression engine. The iron heads were swapped out for Mopar Performance aluminum ones, CNC-machined, cc'd, and fitted with stainless valves. The wild roller cam was replaced with a milder flat-tappet stick."

This Hemi also has parts with a past. "We discovered that the intake and carburetors had been on Dick Landy's car," Ted says of the magnesium cross-ram and Holley 860s. "They don't even have a Holley list number on them—all they had was a Chrysler parts number." Ted says he learned that when Landy tried running these 1964-vintage carbs on his '68 Super Stock Dart, he got DQ'd. Still, it's a rare setup" adds Ted.

What's in store for the '69? "I may return it to the track, but I want to resist putting a cage in it," says Ted, pointing out track and sanctioning-body rules that now require rollcages in cars that run quicker than the 12s. "I might even do a 'bragging rights' 606-inch Hemi, or something like that."

Engine: Not the Bird's original 426 Hemi, but Ted and Mark Becker (with machining and dyno help from Tom Hemphill) built this one based on a .030-inch bored '66 block with a forged-steel crankshaft and rods, JE forged 10.3:1 pistons, solid-lifter Engle camshaft, Mopar aluminum heads, two 860-cfm Holleys on a magnesium cross-ram intake and Hooker Headers...all good for 501 horsepower and 520 lb-ft of torque on pump gas. "We have some leads on the original block," says Ted.

Brakes: Just like it came from the Lynch Road assembly line: non-power 11-inch Mopar drums at all corners

Paint/Body: Original '69 Plymouth B-Body wears its original B5 Blue acrylic enamel paint that Chrysler's Lynch Road assembly plant sprayed on the car back then. The '69½ A12 hood is matte black fiberglass with the same lettering painted on by Ted in 1969. According to Ted, the starburst HEMI covered up the outline of the 440 6 BBL decal that came off when that hood went on to clear the race induction system and reduce weight. (Ted still has the original steel hood.)

Interior: Base1969 Road Runner black bench, in all its Spartan glory except for the Stewart Warner cable-driven mechanical tach and SW oil pressure and water temperature gauges.

Someone needs to get their HEMI out and drive it more!