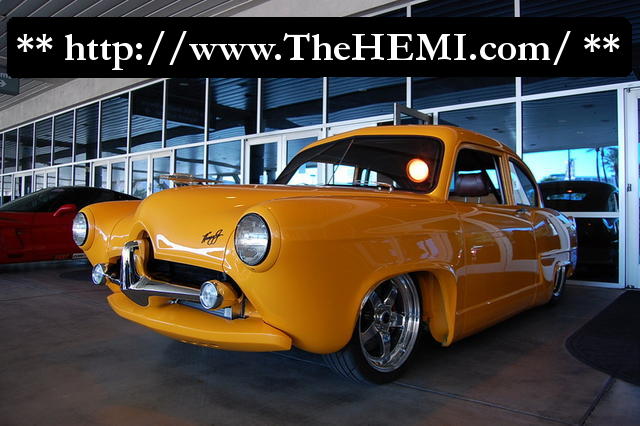 
It can be a challenge to make a Henry J seem fresh—we’ve all seen more gasser J’s than you can shake a stick at—but Ted Dzus’s ’51 brings some serious hardware to bear without seeming trite. The supercharged all-aluminum 528 Hemi certainly lends it some credibility, but attention to detail and smart aesthetic touches, like the mixture of beautiful unrestored chrome trim pieces and carefully chosen satin-black accents, give the build visual interest, not to mention continuity: for example, the PPG School Bus Yellow is overlaid with a subtle blink-and-you’ll-miss-it red pearl that’s referenced by the red Autometer gauges in the dash. Like a lot of SEMA cars, the final bolts were turned just hours ago so the car could be hustled onto the show floor, and it hasn’t exactly been fired up yet. But don’t write it off as a trailer queen: Ted’s cars are built to be drivers, and he’s planning on taking this one on next year’s Power Tour. Watch for him!

I cannot say that I have ever seen a Henry J before?
Scott Moseman
http://www.TheHEMI.com/
Follow us:

This particular car is owned by Dzus Fasteners inventor Ted Dzus and houses a wicked 528-cube HEMI engine under the hood, force-fed by a Vortech Superchargers V4 supercharger along with a F.A.S.T. fuel injection system and a bunch of other go-fast parts.

Enterprising hot-rodders started dropping V8 engines between the framerails, and the Kaiser-Frazier machine took on a new level of cool thanks to its light weight and unique look.

When the car was originally introduced back in the 50′s, it was only available with an inline four- or six-cylinder engine that didn’t offer much in the way of horsepower, and wasn’t much of a looker to boot.

The Henry J was built during a time when American consumers were looking for larger cars, and didn’t really catch on at the time, but we beg to differ with the killer treatment applied here.

Auto Meter gauges are inside the dash, and the rest of the interior has been given a fresh update to match the power under the hood.

Weld Racing RT-S wheels sit on all four corners, giving this Henry J a look that couldn’t have been imagined the day it rolled off the assembly line.

Dzus calls the car “Rollin’ A J”, and there’s no doubt in our minds that it rolls with these goodies under the hood.

It’s got a look that no modern car can match, and an attitude to go along with the looks.