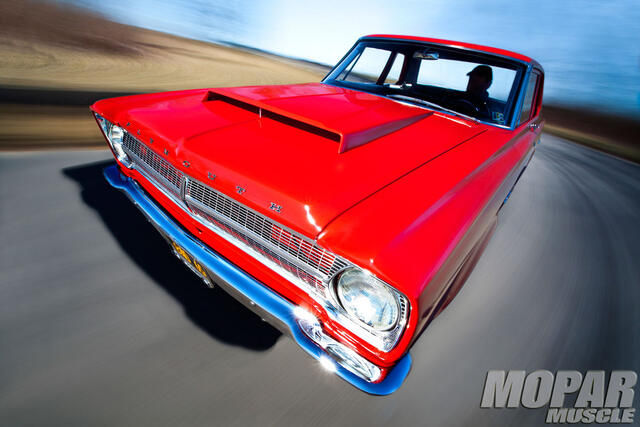 
"With four red steel wheels wrapped in BF Goodrich tires, the car was ready for its first trial run under its own power. With just a gentle touch of the throttle, it was obvious these tires wouldn't handle any of this".--Gene Lukow

Engine: A 1964 Hemi block is the foundation for the 472-inch Hemi that was built by Ray Barton Racing Engines. The guys at Barton's filled the block with Steel H-beam rods, a Callies crankshaft, custom JE pistons, and a Comp Cams flat tappet cam with a lift of .650-inch, and an advertised duration of 284 degrees. A pair of factory aluminum-heads were placed over the bores, and a Magnesium cross ram intake supports a pair of Holley 770 carburetors.
Transmission: It's a row-your-own four speed that was built by Brewer's Performance of Ludlow falls, Ohio.
Rear: An 8-3/4 rear is filled with a Sure Grip and 4.30 gears. It might not be a highway cruiser, but it doesn't lose too many red light showdowns.
Sure Grip

Suspension: The front is carried by a rebuilt stock suspension, but the rear has a launch aid, in the form of Super Stock springs.
Brakes: Since high-speed Autobon driving isn't the intention, stock, manual drum brakes are still employed.
Wheels/Tires: Nothing screams vintage racer like a set of steelies, and Gene's are 15 x 6, and 15 x 8. The tires are BF Goodrich 215/65-15 and 275/60-15.
High Impact

Paint/Body: When this body was purchased, the car was being prepared to be a Pro-Street project, and the floor had been cut out from the firewall to the backseat. Bobby Celani had a friend stop by the shop one day, and he offered the floor out a '64 Plymouth donor car that he no longer needed. Bobby installed the floor and added sub frame connectors to tie everything together. He completed all the body panel prep work & then applied a primer coat. Bob Zelko applied the new PPG Concept Single Stage Bright Ruby Red that he custom mixed. Over the next four months, each surface was carefully prepped, sanded, cleaned, sanded, cleaned and sanded again until everything was straight.
Interior: The comfort portion of this area is handled by the pair of A100 van seats that were upholstered by Garry Ball. Gary also got the nod to restore the rest of the black interior.