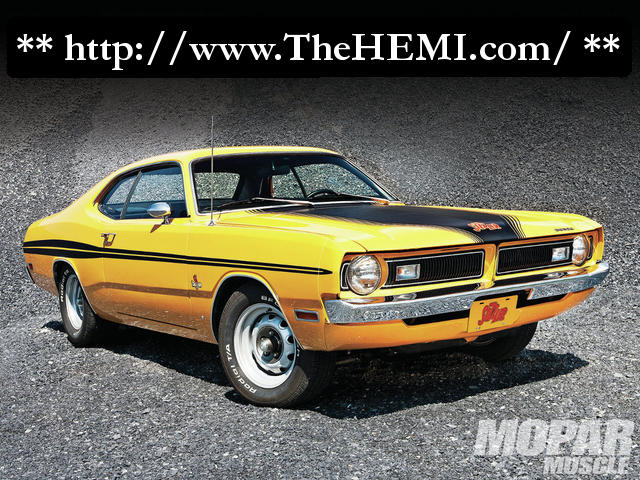 
When was the last time you saw a '71 Demon Sizzler? Much less one with a Hemi between its front fenders? Rewind to early 1971. Ma Mopar came up with an appearance package for the Demon which borrowed the side and rear vinyl stripes from the Demon 340 (and added a hood graphic that was later an option on the '72 Demon 340), plus a "Tuff" steering wheel, Rally wheels--minus the trim rings--and other trim items inside and out. Given option code A59, the Sizzler was only offered on the base Demon--not the 340--and was not offered after the 1971 model year.

Jim wasn't specifically looking for a Sizzler when this one turned up. "I was looking for a Demon, because I like the rarity of it," he says. On his first attempt to get one, he bought a '71 version sight unseen. "I went against [my own] rule of thumb that you should go see every car that you buy," says Jim. "When it got there, I didn't like it because it would take too much money to get it to the point where I was going to invest a heck of a lot more money."

With that A-Body passed over, Jim got a lead on another one, courtesy of his brother-in-law, who lived in California. Says Jim, "He knew a gentleman who was up in age, and lived in Fair Oaks, California, a good distance from where my brother-in-law and my sister live in Fontana."

That original owner belonged to one of the many car clubs in and around Sacramento, an owner that had a warehouse that doubled as a storage facility and clubhouse. This meant that the Demon avoided the strong summer sun, and near-endless winter rains. He also took great care of it, and not just by performing routine maintenance. Jim says, "Over the years he had the original 318 rebuilt twice, the 904 once, and the 81?4 rear once."

Jim bought the car, and when the '71 arrived at Jim's place, it had some surprises for him, but not the horror stories that long-distance buyers sometimes encounter. "When I bought it, the owner told me that it had 79,000 miles on the odometer," Jim recalls. "When I got the car, it actually had 279,000 miles on it." This was proven with a box full of Manila folders that came with the car, which documented everything from the Demon's initial purchase (including the cancelled check written for it), to all work performed on it until the day the car was loaded on the truck.

"But you wouldn't know it from looking at it or driving it. "When I got it off the truck, it drove just like it came out of the showroom," says Jim.

Maybe not showroom-fresh, but it was project-ready, and soon in a shop where its OEM powertrain would come out in favor of a Hemi. "Mark Somma knew what to take out of it," says Jim. "He said, ‘Bring it over, and here's the deal I'll make you. You give me the engine, transmission, and rear end, and I'll make it ready for Denny Laube to put the Hemi in it. I said, ‘That sounds good to me.'"

The 426 Hemi that Denny built is based on an aluminum World Products block and Edelbrock heads that happened to be found in the swap meet at the Mopar Nationals. The conversion, which included a custom-built K-member (which enables the Hemi to fit under the stock hood) and a rack-and-pinion steering, took about a year.