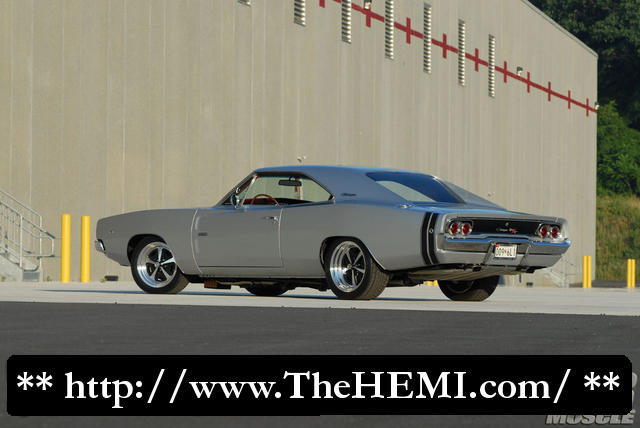 Engine: Hemi power is a special breed; this engine began around fresh Mopar Performance pieces and a custom brew of specialized parts by Ray Barton Racing Engines. The Hemi displaces a total of 472-inches thanks to a stroker crankshaft. The package has a dyno sheet that shows 711 horsepower and a redline of 7,300 rpm; to appreciate all this horsepower fully, you would need to be cruising on the Autobahn. Pat chose to stick with the classic inline quads, using Edelbrock's latest version of the classic AFB, with Barton's crew porting, polishing and bench-flowing the top end. The internals are of Barton's own selection, and we can't get a lot of details, but with 711 horsepower, the right choices were made. The camshaft is a solid lifter design, and Barton's patented redesigned rocker gears tops off the valve train. MSD supplied the distributor and 6AL box, and the battery remains mounted under the hood. A complete 3-inch ceramic-coated tti exhaust system from headers to S/S tips rounds it out. It idles calmly until you get your foot into it...
Transmission: Rick Allison and the guys at A&A set up a semi-competition TorqueFlite for the Charger, with heavy-duty internals and a reverse valve body. Frank Lupo and the crew at Dynamic custom built a torque converter for the application. It specs out at 9-inches in diameter, with a 3,900-stall. A Hurst shifter stirs it up.
Differential: A 4.10 ring in a DTS-built Dana is bulletproof enough for the car to have no problems out back; DTS also supplied the axles and did the rear disc install on the housing.

Suspension: In keeping with a more modern theme, Pat decided to give the car a few 21st century touches. For that, 2-inch drop spindles by Fat Man Fabrication, and two inch lowering springs courtesy of Just Suspension, with the one-inch tire variance giving the car a rakish look without the aggressive rear-lifted sometimes seen in this application. Giving the thoroughbred some highway functionality are Strange gas shocks.
Brakes: Wilwood multi-piston discs are "hanging out" on all four corners
Wheels and Rubber: To rake the car, 17-inch Wheel Vintiques Magnums up front and 18-inch Wheel Vintiques Magnums out back wrapped in road-worthy Nitto tires keeps it stuck to the interstate.

Body: The Colorado body had already undergone some sheet-metal replacement, and John Lanza did the final prep before hitting with the spray gun.
Paint: Lanza used PPG's 1990 Mercedes Silver to make the Charger into a platinum-appearing sculpture.
Interior: After finishing the disassembly, the dash was re-done by Just Dashes, the wheel by Gary's, and the interior supplied by Legendary. Pat put it all together at home, adding a set of AutoMeter gauges and a shift light.