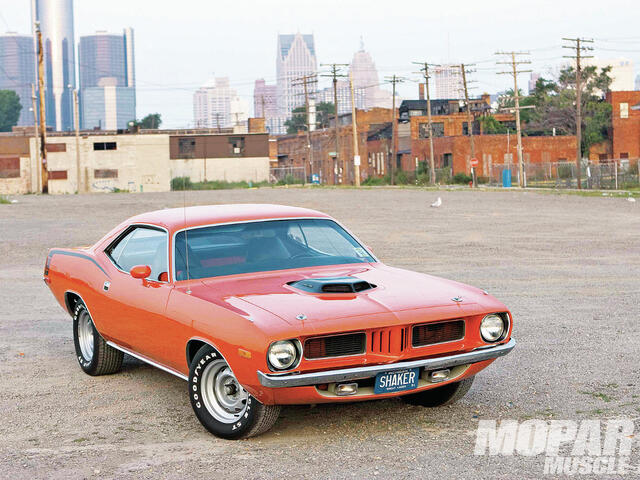 1972 'Cuda - Contractually Obligated
Trust, a signature, and a car all meet in the middle for a great deal
http://www.moparmusclemagazine.com/feat ... index.html


Finding the right car usually means being at the right place at the right time. Many times, however, we all seem to be at the right place, immediately after the right time has just come and gone. For Dave Rudziensky of Grosse Ile, Michigan, he was neither in the right place, or there at the right time--the first time that a deal with this 'Cuda came about. It all started back in November of 1982, when a coworker of Dave's told him about a very clean 'Cuda that a friend had for sale. Apparently the coworker planned to buy the car the following Friday, so Dave thought nothing of it. When Monday morning came around, Dave and his other coworkers waited impatiently for the 'Cuda to arrive in the parking lot. The 'Cuda never did, but the friend arrived in a pickup truck with a snowplow on it. Apparently the friend decided he needed the truck more than he needed a 'Cuda. This now gave Dave a second chance at an E-Body--or did it.

The coworker filled Dave in on the whereabouts of the 'Cuda, but when Dave made the trip to go look at it, there was another person already there looking it over and talking to the owner about it. Lucky for Dave, it seems the potential buyer insulted the car's owner with a low-ball offer, and he was not happy. After the previous tire kicker left, Dave cautiously approached the car owner and reassured him that he was a serious buyer. Dave took the car for a test drive, and other than the first-gear synchronizer needing replacement, the car seemed like a great deal. Dave says it was a great deal, because the car was in great shape. When the owner told Dave of the $2,500 asking price--remember, this was way back in 1982--he asked why Dave didn't counter-offer. Dave's reply was, "It's a bargain, and I'm not inclined to insult you." There was only one problem: Dave already had a Duster at home that he needed to sell before he could buy the 'Cuda. Dave didn't expect the 'Cuda's owner to hold the car for very long, but the next week at work, Andy, the coworker that passed on the deal, told him that the Cuda's owner had called and asked about Dave's character. The following day, Bernie, the 'Cuda's owner, called Dave and made him an offer he couldn't refuse. Dave tells us that the deal went like this: Dave was to give Bernie the $1,700 he would get from the Duster when he sold it, and also pay him $100 every two weeks until the car was paid for. Dave couldn't believe his luck. Then Bernie sweetened the deal by allowing Dave to take the car home--he needed to get to work after all to make the payments. Dave tells us that this act of trust has resulted in a life-long friendship between him and Bernie.

Dave enjoyed the car for a couple of years, and then decided that a rebuild was in order. He took the car to a shop for a simple paintjob, and after a couple of months of them not even touching it. He then took it to another shop. He recalls that it was on a Monday morning when he dropped it off at the second shop. Imagine his surprise when the shop called him the following Sunday to tell him to come pick it up. How's that for service? Anyway, although the car was a factory 340 car with a four-speed, Dave had other plans involving a Hemi. He really wanted a true Hemi car, but the budget was not going to allow it. But he did, however, locate an almost complete Hemi engine while walking around a swap meet in Detroit. The Hemi was missing its valve covers and oil pan, but was otherwise complete. After a while, Dave tells us that he tried to sell the Hemi, but when people came to look at it, they were confused by the strange lifter bores and the heavy-duty connecting rods. After some research, Dave contacted Petty Enterprises, who confirmed it was indeed one of their old Superspeedway engines. So after being rebuilt, out comes the 340, and a very large engine with the funky valve covers and connecting rods goes in its place.

Like many guys, Dave realizes that it takes a lot of help from friends, and he would like to thank his buddies Greg Gordon, Mike Marple, Rich Uroda, Ed Baharian, and John Talbert. Without the help of these guys, it might have never gotten finished. Dave definitely lets us know that being at the right place at the right time is a great way to score a great car, even if the right time and place isn't your first time.

Engine: Although this 'Cuda came from the factory with a 340 under its hood, an old 426 Hemi now fills that space. It turns out that the Hemi was once used by Richard Petty in his Superspeedway racing. The connecting rods are early Chrysler NASCAR-spec, and Diamond Racing pistons building 10.8:1 compression are swinging from the ends. A 4340 Steel crankshaft resides under the Racer Brown camshaft with .536-inch lift, and as Dave puts it, "a lot" of duration at .050-inch. The heads are factory Chrysler, and are ported by Dave. The stock rocker arms work the k-Motion valvesprings, and magnesium intake supports a Pro Systems 950 carburetor. Hooker headers send everything through the 3-inch exhaust.

Transmission: Stirred by a Hurst Pistol Grip, this one is an aluminum Hemi box.

Differential: What else but a Dana 60 would survive behind a Hemi, and this one has a Sure Grip, and 4.10 gears.

Suspension: The front is restored to stock, and the rear uses Super Stock springs.

Body: Unchanged from original, except for the addition of the Shaker hood taken from a '71 Cuda.

Paint: Although in decent shape when Dave bought it, he had Ed Orzechowski of Livonia, Michigan, cover it with a coat of Tor-Red. They also added the Shaker scoop, sourced from a '71 'Cuda.

Interior: Almost-stock restored using Legendary parts. The deviation from stock comes with the seat skins. Dave's wife noticed the different colored centers on a '71 Road Runner's seats and liked it.