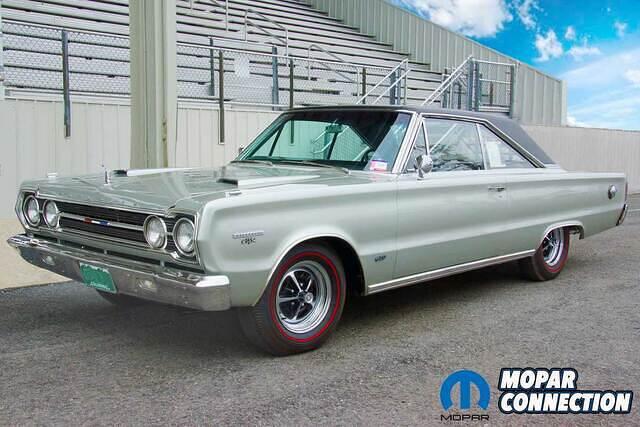 
In 1967, Plymouth’s advertising slogan was “Plymouth is out to win you over.” A dealership sales brochure introduced the GTX by declaring, “GTX: Plymouth’s fastest way to win you over.” The pamphlet continued asserting the GTX was “the most exciting Supercar to come out of Detroit in years.”

The GTX was an all-new for ’67 trim line for the Plymouth Belvedere. To separate the GTX package from the lower-line Plymouth intermediates, it came with a unique grille, a pair of simulated hood scoops, special angled exhaust tips, and extra badging. The GTX came standard with a 440 Super Commando; however, a serious buyer could tick the order box for the 426 Hemi.

The story of long-time eastern Colorado resident Jim Patterson’s Hemi GTX starts back in the fall of 1966. The GTX was ordered from Dick Green Chrysler Plymouth, located on Gratiot Ave in East Detroit, in September of ‘66. Three weeks later, Walter Reghi, a fresh out of the academy Detroit police officer, picked up his ride.

Not surprisingly, the monthly payments for the $4,612.95 4-speed Hemi GTX did not match well with a new officer and soon-to-be dad, so after a little over a year of ownership, the GTX was traded in 1968 for a more family-friendly Buick.

Patterson contacted Reghi and found out the GTX did get some exercise in its first year of ownership. With several police friends loaded in the GTX, Reghi took the GTX on a spirited run on I-90, where the speedometer was buried at over 150 mph! Reghi stated, “There was nothing else like it. It was the most powerful car you could buy back in the day.”

Reghi continued, “There was a little engineering shop where some of the Chrysler engineers hung out over by Highland Park. While working the night shift, I got to know several of the engineers. When the Hemi needed tweaking, or the Inland 4-speed shifter needed adjustment, they took care of it.” To thank them, Reghi tended to look the other way when the engineers, along with “factory-backed” Mopar street racers, did some nighttime testing on Woodward Ave.

In 1968, the 2nd owners, Larry and Saundra Cunningham, relocated the GTX to Pueblo, Colorado. Both of the Cunninghams became Pueblo High school teachers. Saundra Cunningham relayed to Patterson, “The GTX was one powerful car. Larry would race all the high school kids with it.” The fateful move of the GTX to Colorado likely saved it from the ravages of Detroit winters and all the body-eating road salt. The winters in Colorado are also at times extreme; however, Colorado did not use salt.

In 1980, a Denver police officer was planning to sell the Hemi, which was damaged and partially disassembled. However, to keep the GTX a driver, the officer planned to install a slant six into the GTX. Patterson drove up to Conifer, Colorado, to buy the engine, but he asked to see the car when he arrived.

When the garage door was opened, there sat the GTX with 1973 license plates still on it. While Patterson did not know what was wrong with the Hemi, he offered to buy the GTX for $400, which was four times the amount the officer had paid seven years prior. Patterson bought the car and stored it in a friend’s chicken coop for four years until there was room in his garage.

While every Hemi car is unique, Patterson’s GTX is extraordinary. The car was delivered with the 426 Hemi, a 4-speed, and a 3.54:1 geared Dana 60. The GTX was ordered with power steering, power disc brakes with Bendix 4-piston calipers, a passenger-side mirror, the light package, which included fender markers, trunk light, ashtray light, and glove box light. The interior came with an electric clock, an AM-FM radio, a rear speaker with fader, and a console with a tachometer, and the exterior was coated in silver paint.

The rolling stock consisted of chrome road wheels and 7.75 Redline tires. The oddest option for the GTX was shoulder harness belts, which anchored behind the rear seat and went over the shoulder of the front seat outboard passengers. The straps were six feet long and tied into a front-mounted floor connector with an eye bolt.

The factory code AA1 Silver paint was specially ordered at an extra cost. The color was called Special Buffed Silver, one of the rarest colors in ’67, with less than 1% of all Chryslers coming in that color. It is believed Patterson’s GTX is one of two AA1 silver 4-speed Hemis known to exist. While the information about the silver paint seems pretty accurate, there is some controversy about the total numbers of Hemi ’67 GTXs produced.

The accepted number for years was 108 Hemi GTXs were made with 45 of those being 4-speeds. The latest data, including Canadian, export, and other assembly plant builds, puts the total at 733 total, with 312 having 4-speeds, but these numbers are suspect. Patterson’s GTX is an early build ’67, which was built at the Lynch Road assembly plant. The GTX came with ’66 Hemi emblems on it as the ’67 emblem design was not completed. Later GTXs were built at multiple assembly plants, and the October ’66 or later cars came with the updated Hemi emblems.

In 1985, once Patterson secured a spot in his garage for the GTX, he went through the drivetrain. The non-running Hemi was torn down, and it turned out, a spun rod bearing was the culprit for the failed engine. Patterson balanced and blueprinted the engine, starting with the original standard bore block. Other than the heads, which received mild port work and a thorough three-angle valve job, the Hemi was rebuilt to factory specs.

Camonics Camshaft Company supplied the factory replacement camshaft with the exact ’67 factory camshaft specs. Patterson also went through the transmission, suspension, and brakes. The Dana 60 was cleaned and repainted. Finally, the chassis was detailed to return it to the factory appearance. For the first time in over a decade, the GTX was moving under its power.

The interior of the GTX was in good shape, but a few things needed some attention. Seeing the restoration was performed in the ‘80s, there were no restoration parts available. Patterson sent the original seats to Legendary Interiors to copy, and it took them four years to finally reproduce seat covers based upon Patterson’s set.

The carpet is from Auto Custom Carpets, and Patterson installed the headliner himself. The rest of the interior is all original, including the dash pad and rear deck panel, which no restoration manufacturer has ever reproduced. The GTX has nearly 100% of the original factory parts, which Patterson cleaned and buffed. To replace the few pieces he could not repair, Patterson found new old stock (NOS) parts.

With the refreshed interior and the rebuilt driveline, Patterson enjoyed the GTX for about a year. At that time, he decided to take the entire GTX apart to repaint it. The paintwork and the reassembly took about a year to complete. Ultimately, the restoration was finalized, and the GTX was back on the road by ’88.

Since then, Patterson has made the rounds with the GTX. With all its chrome, fancy interior, and comfort of a C-body Chrysler blended with the Hemi, the Gentleman’s muscle car has been to and probably won best of show or best of class at every significant event in the United States. So, if you see this beautiful silver ’67 GTX at an event, stop and take a look, because you will likely never see another. While examining the GTX, take a minute or two to speak with Patterson about his adventures with the mile-high Hemi.

I think "Gentleman's muscle car" is an absolutely great description for a HEMI GTX.
I must be getting older because these are really starting to grow on me. I want one!