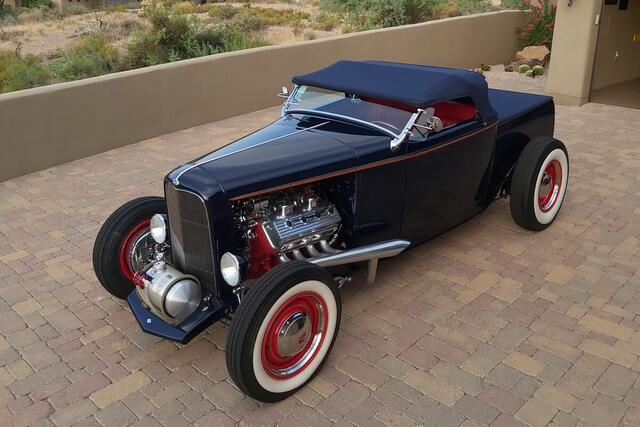 
January is Ford Month here at autoevolution, so expect from us a flood of pieces on high-profile production Blue Ovals of the past and present. But because Ford is also the favorite platform for vintage hot rods, expect an avalanche of those too. And here’s one of the first ones, a 1932 hi-boy powered by a HEMI engine, because this is how these builds usually roll.

The thing you’re looking at was built a decade ago by a shop called Ball’s Rod & Kustom, with the goal of displaying it at the time’s SEMA show. As far we understand, it never made it to Vegas, as it was purchased and used for other promotional appearances.

We're told the body of the hot rod, with the four wheels properly and fully exposed to the elements, is all steel, with the exception of the bed at the back, which is made of fiberglass. Sporting U.S. Navy livery (Navy Blue paint and navy blue Haartz cloth soft top), the exterior is said to be still without fault.

The interior is the blood red usually deployed on builds of this kind, and it fits the ‘32 like a glove. The thing is as simple as they get, with the red steering wheel fitted in front of the simple dash and a bench large enough to accommodate two people.

As it usually happens in this segment, Ford supplies the body and inspiration, but in the powertrain department, some other name is chosen. It this case, the garage responsible for the build went for a HEMI 354-ci (5.8-liter) allegedly used in a 1956 Chrysler Imperial and linked it to a GM three-speed automatic transmission.

The HEMI-powered 1932 Ford hot rod is presently for sale on Hemmings. There is about a week left to go in the process, and already the car has $40,000 pledged to it.

This is a good looking '32 Ford with a perfect choice 354 HEMI under the hood.