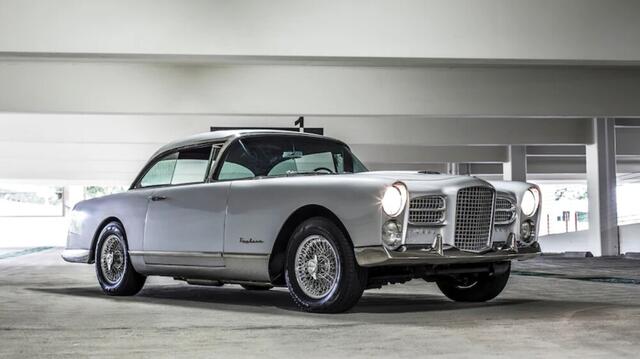 Blending American toughness with French elegance, the 1958 Facel Vega FVS Series 4 Sport Coupe resembled a compact European version of the fashionable 1957 Chrysler 300C. Rising to the ranks of Bentley, Mercedes-Benz, and Rolls-Royce, this French grand tourer had it all and packed a powerful Chrysler Hemi V-8 engine. Facel-initially a manufacturer of military aircraft parts founded by Bronzavia in 1939-changed direction and shifted its focus to luxury cars in order to remain in business following World War II.

Enlisting designer Jean Daninos, who had spent time in the U.S. and worked previously at Citroën, Facel formed a partnership with Metallon and began to produce custom bodies for top French automakers, namely Simca. Additionally, the business also expanded to make bodies for scooters, trucks, and army jeeps. After the partnership with Metallon ended in 1953, Daninos took charge and, with dreams of designing a car, Facel rolled out plans for the Facel Vega.

The newcomer among luxury French marques, Facel debuted its first Facel Vega model at the 1954 Paris Salon, and the elegant coupe wowed the audience. Advertised to an upscale clientele as "For the Few Who Own the Finest," members of the exclusive Facel Vega ownership club included Tony Curtis, Stirling Moss, and Ava Gardner.

Sharing parts of its chassis with Chrysler, the rear-drive Facel Vega used a tubular frame, and the suspension consisted of a leaf-sprung live rear-axle, and coil springs and double wishbones up front. The engine of choice for early Facel Vega models from Chrysler's subdivision was the DeSoto Firedome 4.5-liter Hemi V-8 delivering 180 horsepower. Mated to a two-speed PowerFlite automatic transmission, for a few extra dollars, an optional four-speed manual by Pont-à-Mousson could afford owners a better driving experience.

On the outside, the 1954 Facel Vega (FV) ascribed a somewhat disorderly front end with double-stacked headlights and a sectioned-out multi-piece grille. Rounded tailfins, the implanted wedge-shaped taillights, and later deletion of the A-pillar and B-pillar added a hint of obscurity. Sitting on flashy chrome-wire wheels, the 1956 Facel Vega Sport had an opulent interior that mirrored an intimate booth at a speakeasy bar; you can just smell the bourbon and cigar smoke.

Inspired by aviation, the cabin featured a curving walnut-burl dashboard, nicely laid out gauges on the center stack, a gloss-black steering column, and Connolly leather upholstery everywhere. A stylish and unorthodox center console stretched to the rear cargo space. For trips to the countryside or bustling city, also included was a stunning luggage set that passengers most certainly appreciated during extended travel.

Subsequently available with a push-button TorqueFlite three-speed automatic, the 1956 Facel Vega Sport was highlighted by wraparound windshield glass, and it appeared more refined.

Facel Vega History: The Jewel in the Crown

Between 1956-'58, Facel produced a total of 310 FVSs, and a lucky 36 examples from the 1958 model year received a 6.4-liter Chrysler Hemi FirePower engine, also called the Typhoon V-8. Rated at 325 hp and 430 lb-ft of torque, the 1958 Facel Vega FVS Series 4 Sport Coupe, or "FV4 Typhoon" when fitted with dual quads, could produce an impressive 355 hp. The FVS Series 4 Sport Coupe helped to solidify the Facel Vega's creds; however, not even the highly desired version could pull the French automaker out of the quicksand.

Facel Vega History: Even Great Things Come to an End

The HK500 would close end the Facel Vega's eight-year production-run history from 1954-'62. Although the HK500 enjoyed a fair share of success, it was never as cool as the limited FV4 Typhoon. In concours condition today, the 1958 Facel Vega FVS Series 4 Sport Coupe can claim just more than $300,000 and, at its lowest, somewhere in the $85,000-$110,000 range. The FVS Series 4 Sport Coupe is rare and seldom crosses auction blocks, so do not expect to see one listed anytime soon; as the Facel Vega slogan said, it's still "For the few who own the finest."

This is definitely the kind of HEMI stuff you don't come across every day, huh?