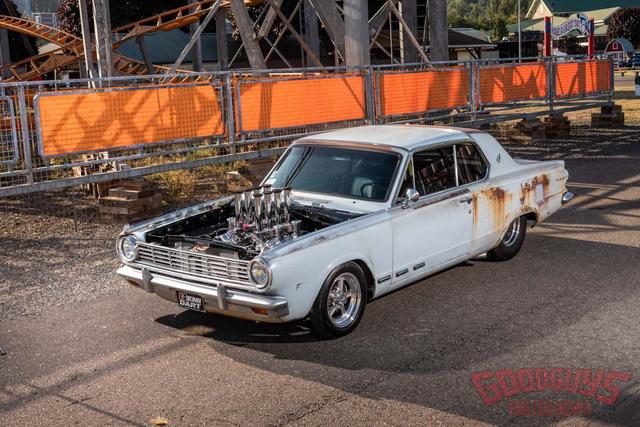 
Do you remember those monster hot rod illustrations that were so popular in the ’60s and ’70s, the ones by Ed Roth and Ed “Newt” Newton with the cartoonishly large engines stuffed into tiny cars? Kim Brynn’s 1965 Dodge Dart GT is kind of like one of those brought to life – a ’60s compact stuffed with a massive 392c.i. Chrysler Hemi topped with tall-stack fuel injection. The only thing missing is an illustrated monster poking its head out the window and a giant shifter protruding through the roof!

The centerpiece of this beast is, of course, that mighty Hemi – the foundation for so many great drag cars through the decades. Kim has fond memories of the ’60s and ’70s glory years of drag racing, specifically those first-generation Hemis. “Mopar stuff was the king of the dragstrip,” Kim said. “The 392 Hemi to me has always been the ultimate.”

This one is a ’58-vintage mill built from a block and crank that Kim sourced from renowned Pacific Northwest drag racer Walt Austin. Kim assembled it using a Crane hydraulic roller camshaft, MSD ignition, and aluminum heads from Hot Heads, which were massaged by Austin before being topped with an original set of polished aluminum Donovan valve covers. While the polished tall-stack intake tubes are a throwback to earlier times, the Hilborn injection is electronic and expertly set up by Andy Starr, making this beast much more streetable and easy to tune. Power is transferred through a B&M-shifted, Hughes-built 2004R overdrive automatic with a 3000rpm stall converter.

Kim has always liked the idea of big engines in little cars. In fact, he’s got another 1965 Dodge Dart – an A/FX-style car – that led to the purchase of this one. Someone saw that first Dart at a car show and offered Kim this one for just $300! Solid and straight, with just the right amount of patina, Kim knew it was a perfect home for a Hemi.

As you might expect, the chassis has been completely updated using a Reilly Motorsports front suspension and an Art Morrison four-link rear clip tied together using subframe connectors. A 9-inch rearend with Strange axles handles the Hemi power, while Wilwood disc brakes bring the 15×3.5- and 15×12-inch Billet Specialties wheels to a stop.

Credit goes to Brad Hadman for crafting the roll cage inside, while Kim tackled installing the new floors and other tin work himself. The black bucket seats are ProCar items, while Classic Instruments gauges fill a custom panel in the dash and a Moon steering wheel tops the tilt column.

Built mostly at home in Kim’s garage, the Dodge looks rowdy and rambunctious like those old monster cartoons, yet is surprisingly roadworthy thanks to the EFI and thoughtful build decisions. “It runs really great,” Kim said. “It’s totally streetable.” Sounds to us like this 1965 Dodge Dart has hit a bullseye.

I don't think an engine can look much more cool than a 392 HEMI like this!