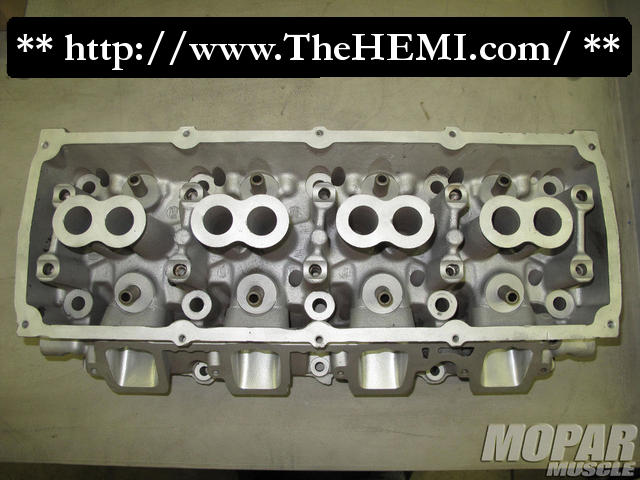 
It's difficult to argue with the technological advancements that make Chrysler's new products like the Challenger and Charger fun to drive. Chrysler's late-model Hemi engine is a prime example of these advances in technology, with many features that older Mopar engines just didn't offer. From the factory the 5.7, 6.1, and now 6.4 liter Hemi engines come equipped with a roller camshaft, lightweight valve train components, and a sophisticated oil system to reduce crankcase windage. And like the first and second generation Hemis, the new Hemis benefit from impressive cylinder head flow numbers right from the factory.

Here at Mopar Muscle, we always knew the late-model Hemi engines would be a hit, as they very easily make big-block power and torque while remaining very economical and running great on pump gas. The aftermarket has also embraced the new Hemi, and it's now easier than ever to get more power from the engine in your new Challenger, Charger, Magnum or 300. Installing a third generation Hemi in an older Mopar has never been easier either with parts like the Mod-Man intake from Indy, ignition systems from MSD or FAST, oil pans from Milodon, and headers from TTI. Thanks to this aftermarket support we're seeing more and more late-model, modified Hemis not only in LX platform cars, but in older Mopar show cars and racecars as well.

The 5.7 engines are the most common of the late model version, and because they were installed in nearly every V-8 equipped late-model Mopar, including trucks, they are getting more and more abundant and inexpensive to buy. The 6.1 and 6.4 Hemis obviously offer greater displacement, and their cylinder heads do flow better from the factory than the 5.7 heads. Unfortunately they are also more expensive and hard to find due to the limited availability. Recognizing the performance potential of the 5.7 Hemi head, Indy Cylinder Head developed a CNC program to port these heads, resulting in impressive flow numbers.

Cylinder head flow is an important factor in any internal combustion engine, and the new Hemi is no exception. By CNC porting the 5.7 head and performing a multi-angle valve job, Indy improved the intake flow of these heads by more than 50 cfm throughout the .500 to .700 inch valve lift range where peak power is made, with significant flow improvements at lower lifts as well. On the exhaust side, flow was increased by 40 cfm from .500 to .700 lift, with noticeable flow increases at lower lifts.

We were invited to Indy's shop to dyno test a 6.1 Hemi with a set of CNC ported 5.7 Hemi cylinder heads. This was a cool dyno session, demonstrating the power a third-generation Hemi could make while remaining nearly stock. Indy's website advertises this same 6.1 Hemi with a factory SRT-8 camshaft, topped with CNC ported heads at 435 horsepower and 410 lb/ft of torque. You'll have to go to the website to see how much power this engine actually made, but we'll just say it easily exceeded the advertised rating.

While we were at Indy Cylinder Head we also got to check out a set of their CNC ported 5.7 castings up close, and were impressed by the quality of the port work on the heads. Chrysler's exceptional engineering, combined with Indy's modern computer-controlled machine work, has made building a powerful late-model Hemi engine more economical than ever. Indy sells the 6.1 engine we tested with un-ported heads for less than $7,000, and CNC porting is only a $600 upgrade. With power and torque numbers well above 400, it would be difficult to build a Mopar big-block or even small-block with similar power numbers for the cost.

Check out the flow and dyno numbers below and you'll agree, the new Hemi engine is potent for its size, and its light weight and smooth idle qualities make it an ideal sleeper engine for a late-model or classic Mopar. Indy's basic 6.1 is conservatively rated at 400 horsepower and 375 lb/ft of torque, but add Indy's CNC porting to the 5.7 Hemi cylinder heads and the third generation Hemi really comes alive, making well over the claimed 435 horsepower rating. Be sure to check out our website, moparmusclemagazine.com, for videos of this engine making pulls on Indy's dyno.

Follow the link to check out the before and after flow numbers!
Scott Moseman
http://www.TheHEMI.com/
Follow us: