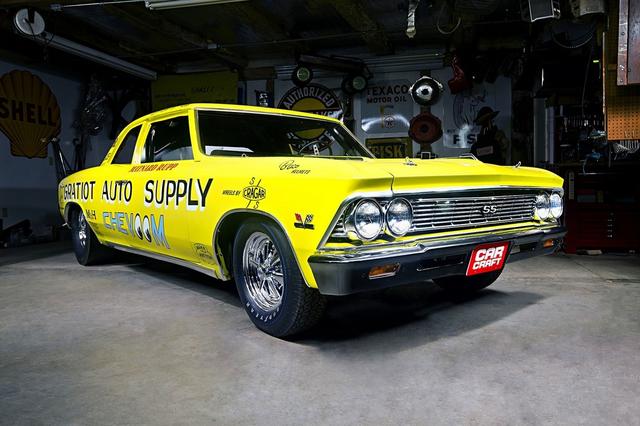 
To know where you’re going, you need to know where you came from, and at Car Craft that is sometimes taking a step back and visiting the past, and with 66 years of content to draw from, all it takes is a gentle prod in the right direction. That’s what happened when we stumbled across a mid ’60s fiberglass-bodied, rear-engined Chevelle powered by an early Chrysler Hemi with “Car Craft Project Car” painted on the decklid on display at the US30 Indoor Dragfest show.

That hand-painted lettering hooked us in, so we went digging into the archives for some answers and came up with the following: built in late 1965 by Maynard Rupp and Gratiot Auto Supply for the 1966 funny car season, it was their vision of where the class was heading. We were also surprised to discover that it was a Ridler Award winner in 1966, and noted as one of the 10 Best Rods of 1966 in the January 1967 issue of Car Craft Magazine.

Chevoom was only around for one season and it was sold off after that and abruptly faded into obscurity. Ken Bigham, the current owner, purchased the car in 1985 and parked it for many years in his barn until it was given a full restoration in 2017. Greg Cook and Bob Foote at Cooks Restorations in Gettysburg, PA performed that restoration in six months for its unveiling at the Concours d’Elegance of America held annually in Plymouth, MI. Greg documented the restoration of the Chevelle and has shared with us the photos that you see here. We also did a full feature shoot and story on the car, and will be sharing that with you in the month ahead.

Check out the article, it goes into great detail on the restoration. This is awesome.