Chicago Mayor is protecting her home, but not yours

Chicago Mayor is protecting her home, but not yours 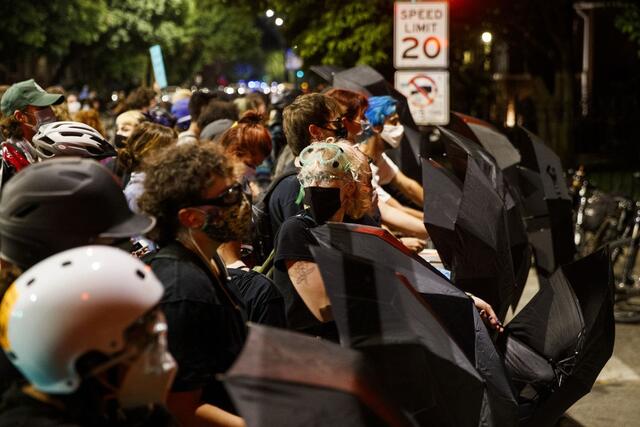 Citing threats, Mayor Lori Lightfoot defends ban on protesters on her block: ‘I have a right to make sure that my home is secure’
https://www.chicagotribune.com/politics ... story.html


Mayor Lori Lightfoot defended the Chicago Police Department’s ban on protesters being able to demonstrate on the block where she lives, telling reporters Thursday that she and her family at times require heightened security because of threats she receives daily.

Lightfoot refused to elaborate on the specific threats, but said she receives them daily against herself, her wife and her home. Comparisons to how the Police Department has protected previous mayors’ homes, such as Rahm Emanuel’s Ravenswood residence, are unfair because “this is a different time like no other,” Lightfoot told reporters.
‘Fort Lori’: Chicago police ban protests on Mayor Lori Lightfoot’s block, order arrests for anyone who won’t leave »

Lightfoot and Chicago police Superintendent David Brown were asked at an unrelated news conference about a Tribune report noting police have banned protesters from demonstrating on her block in the Logan Square neighborhood, ordering officers to arrest anyone who refuses to leave.

The directive surfaced in a July email from then-Shakespeare District Cmdr. Melvin Roman to officers under his command. It did not distinguish between the peaceful protesters Lightfoot regularly says she supports and those who might intend to be destructive, but ordered that after a warning is given to demonstrators, “It should be locked down.”

Activists and police sources could not cite instances when the city repeatedly locked down her predecessor Emanuel’s block against protesters. The Kenwood block where former President Barack Obama lived with his family when his primary residence was in Chicago was shut down for access only by residents after his election.

But Lightfoot said such comparisons “don’t make any sense,” after Brown referenced the ongoing coronavirus pandemic as well as civil unrest that have flared since the George Floyd killing at the hands of Minneapolis police.

“I’m not going to make any excuses for the fact that, given the threats I have personally received, given the threats to my home and my family, I’m going to do everything I can to make sure they’re protected,” Lightfoot said. “I make no apologies whatsoever for that.”

Since the order, and even for a time just prior to its writing, Chicago cops have repeatedly blocked protesters’ access to the block with groups of officers and barricades. Police have often kept protesters contained at the nearby corner of Kimball and Wrightwood avenues, though one standoff between activists and officers last month saw police go as far as bringing in an armored vehicle in case things got out of hand.

Aside from the expanded police presence to block protesters from reaching her home, Lightfoot already receives 24/7 protection from cops including officers stationed at the residence. The aggressive policing has sometimes siphoned away resources from the area’s police district, some sources with knowledge of the situation said, leading to quiet grumbling.

Both Lightfoot and Brown noted there are laws on the books banning residential protests, but Brown acknowledged the Police Department does not always enforce them. Brown said the city tries to give “wiggle room” for protesters.

Brown also cited instances where peaceful protests have been “hijacked” by agitators as reason for keeping demonstrators off Lightfoot’s block.

“We have seen very peaceful First Amendment protests for the most part but embedded in each of those protests have been very violent people. And they’re embedded. They put up umbrellas. And they come for a fight,” Brown said. “So we have to prepare for what we’ve seen.”

All of the sudden the Chicago Mayor is finding the "peaceful protests" are too violent.
Too bad all of these city officials are not doing the same to protect their own citizens.

Re: Chicago Mayor is protecting her home, but not yours

It's just like many of the anti-gun leadership have gun permits or hire guys with guns to protect them.
Top
Post Reply
2 posts • Page 1 of 1