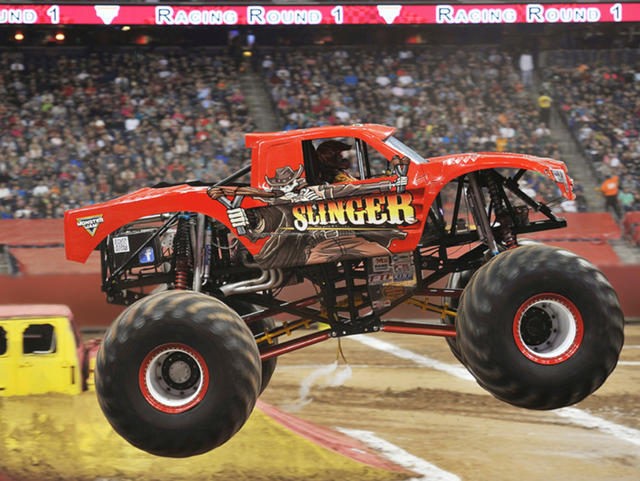 
When Monster Jam roars into Raymond James Stadium on Saturday, something will be missing from the enormous trucks — all images of guns.

There are still trucks with menacing names like Grave Digger and Maximum Destruction. But Slinger, formerly Gunslinger, was quietly redesigned in 2017 to turn the gun images on the truck to slingshots.

The gun turret from Soldier Fortune was removed that year. And the Metal Mulisha monster truck was redesigned to remove the image of a gun.

Ellenton-based Feld Entertainment is the producer of Monster Jam, Disney on Ice, Sesame Street Live and a host of other live family-oriented shows. It saw its share of protestors and controversy when it operated the Ringling Bros. and Barnum & Bailey Circus. In an attempt to assuage animal rights protestors, Feld took elephants out of the circus in 2016. But attendance plunged, and the circus closed for good in 2017.

“Monster Jam is a family-friendly brand with an international presence, and we are always innovating and evolving the intellectual property associated with our Monster Jam trucks,” Yaros said. “We represent over 50 different Monster Jam trucks and have a truck and design that is relatable to our wide range of fans and their interests.”

It’s a risk for companies like Feld to potentially alienate its fan base, said Maurice Schweitzer, a professor at the Wharton School at the University of Pennsylvania. That’s why they were smart to make the change quietly, he said.

“Clearly they wrestled with the experience of the elephants and the animal rights protests with the circus,” Schweitzer said. “Once the protest movement gets underway, it makes it difficult to make it go away.”

By getting out ahead of it, they cut short accusations of glorifying guns, Schweitzer said.

“The risk is, they may suffer a backlash from some of their customers who don’t like the idea that they’ve adopted a more politically correct stance, that some of their favorite characters have been defanged, or that it looks like censorship.”

The difference, he said, was that elephants were a critical part of the circus performance, whereas gun images are merely a subtle change to a monster truck show.

Feld’s change to Monster Jam came a year after the Pulse nightclub shooting in Orlando left 49 dead, and five years after 20 children and six staff members were killed at Sandy Hook Elementary in Newtown, Conn.

After more recent shootings, victims and their advocates have had more success targeting businesses to change their ways or sever ties with gun groups.

When a gunman used an accessory called a bump stock in a mass shooting in Las Vegas in 2017, Walmart and the outdoors store Cabela’s removed the products from their websites.

But it was the Parkland school shooting in 2018 in Broward County, industry experts have noted, that prompted major companies to suddenly shed ties to the National Rifle Association. Delta and United Airlines axed discounted rates for NRA members, as did some car rental brands.

Two weeks after Parkland, Dick’s Sporting Goods announced it would end all assault-style weapons sales and stop selling guns or ammunition to anyone younger than 21. Other retailers including Walmart followed suit. Dick’s has since seen sales drop after it was a target of boycotts.

Entertainment communities like country music and NASCAR have seen a growing demand for debate.

Country stars started speaking out after the 2017 Las Vegas shooting. Big & Rich’s John Rich, a staunch gun rights advocate, stepped in to urge fans to cease attacks on Americana singer Jason Isbell, who had challenged other country artists to join the End Gun Violence Together campaign.

“He’s a good man and means well, he’s trying to have dialogue and I applaud that,” Rich tweeted. “I’m open to dialogue anytime on the subject, as are many of my fellow artists.”

The NRA has accused companies of “a shameful display of political and civic cowardice.” Supporters and detractors of the NRA have butted heads over the issue on social media, calling on companies to either stay put or step away, leaving little neutral ground.

On some message boards Monster Jam fans weren’t happy, though it didn’t appear to be widely noticed. In a July 2017 YouTube rant, a Monster Jam fan posting as ClearSky Productions said, “The biggest problem is they took Gunslinger and they censored it to Slinger. What kind of a stupid idea for a truck is that? Nobody fights each other with sling shots.”

As someone who's been to nearly 30 shows in the last 10 years, I'm very disappointed in Feld Entertainment. As a company which strongly promotes support of first responders and the military, it's ironic they are caving to political correctness against the 2nd Amendment. The Monster Jam shows are certainly very family friendly events and great fun for fans of all ages, races and sexes. It's too bad they are starting to become political, so sadly I must say my decade long streak of supporting them has come to an end.