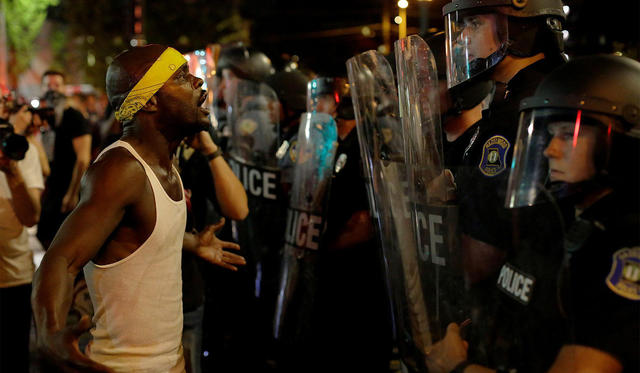 
And the media narrative to the contrary is damaging.

A few days ago, former police officer Jason Stockley, who is white, was acquitted of first-degree murder; he had fatally shot Anthony Lamar Smith, who was black, in 2011. Protests started in St. Louis, where the shooting took place and Stockley was judged, immediately after the verdict was announced. Although they were initially peaceful, they soon turned violent, and dozens of protesters were arrested while several police officers were injured. Since the shooting of Michael Brown in Ferguson, just outside St. Louis, in 2014, this has become a familiar pattern.

This article is not about whether Stockley should have been acquitted. Instead, I want to talk about the underlying narrative regarding the prevalence of police brutality against black men in the U.S., which is largely undisputed in the media.

According to this narrative, black men are constantly harassed by the police and routinely brutalized with impunity, even when they have done nothing wrong, and there is an “epidemic of police shootings of unarmed black men.” Even high-profile black celebrities often claim to be afraid of the police because the same thing might happen to them. Police brutality, or at least the possibility that one might become a victim of such violence, is supposed to be part of the experience of a typical black man in the U.S. Events such as the death of Brown in Ferguson are presented as proof that black men are never safe from the police.

This narrative is false. In reality, a randomly selected black man is overwhelmingly unlikely to be victim of police violence — and though white men experience such violence even less often, the disparity is consistent with the racial gap in violent crime, suggesting that the role of racial bias is small. The media’s acceptance of the false narrative poisons the relations between law enforcement and black communities throughout the country and results in violent protests that destroy property and sometimes even claim lives. Perhaps even more importantly, the narrative distracts from far more serious problems that black Americans face.

Let’s start with the question of fatal violence. Last year, according to the Washington Post’s tally, just 16 unarmed black men, out of a population of more than 20 million, were killed by the police. The year before, the number was 36. These figures are likely close to the number of black men struck by lightning in a given year, considering that happens to about 300 Americans annually and black men are 7 percent of the population. And they include cases where the shooting was justified, even if the person killed was unarmed.

Of course, police killings are not the result of a force of nature, and I’m not claiming these are morally equivalent. But the comparison illustrates that these killings are incredibly rare, and that it’s completely misleading to talk about an “epidemic” of them. You don’t hear people talk about an epidemic of lightning strikes and claim they are afraid to go outside because of it. Liberals often make the same comparison when they argue that it’s completely irrational to fear that you might become a victim of terrorism.

In order to show that, I’m going to use data from the Police-Public Contact Survey (PPCS), which, as its name suggests, provides detailed information about contacts between the police and the public. It’s conducted on a regular basis by the Bureau of Justice Statistics (BJS) and is based on a nationally representative sample of more than 70,000 U.S. residents age 16 or older. Respondents are asked whether they had a contact with the police during the past 12 months; if they say they did, they answer a battery of questions about the nature of their last contact, including any use of force. Since the respondents also provide their age, race, gender, etc., we can use this survey to calculate the prevalence of police violence for various demographic groups. The numbers in this piece are from my own analysis of the data, the details and code for which I provide here, but they are consistent with a 2015 report compiled by the BJS itself to the extent the two overlap.

Further, physical force as defined by the PPCS includes relatively mild forms of violence such as pushing and grabbing. Actual injuries by the police are so rare that one cannot estimate them very precisely even in a survey as big as the PPCS, but the available data suggest that only 0.08 percent of black men are injured by the police each year, approximately the same rate as for white men. A black man is about 44 times as likely to suffer a traffic-related injury, according to the National Hospital Ambulatory Medical Care Survey. Moreover, keep in mind that these tallies of police violence include violence that is legally justified.

Now, it’s true that there are significant differences in the rates at which men of different races experience police violence — 0.6 percent is triple 0.2 percent. However, although people often equate racial disparities with bias, this inference is fallacious, as can be seen through an analogy with gender: Men are vastly more likely to experience police violence than women are, but while bias may explain part of this disparity, nobody doubts that most of it has to do with the fact that men are on average far more violent than women. Similarly, if black men commit violent crimes at much higher rates than white men, that might have a lot to do with the disparity in the use of force by the police.

This is evident in the National Crime Victimization Survey, another survey of the public conducted by the BJS. Interviewers ask respondents if they have been the victim of a crime in the past 12 months; if they have, respondents provide information about the nature of the incidents, including the race and ethnicity of the offenders. This makes it possible to measure racial differences in crime rates without relying on data from the criminal-justice system, in which racial bias could lead to higher rates of arrest and conviction for black men even if they commit violence at the same rate.

NCVS data from 2015, the most recent year available, suggest that black men are three times as likely to commit violent crimes as white men. To the extent that cops are more likely to use force against people who commit violent crimes, which they surely are, this could easily explain the disparities we have observed in the rates at which the police use force. That’s not to say that bias plays no role; I’m sure it does play one. But it’s unlikely to explain a very large part of the discrepancy.

Some might say that, instead of consulting statistics like these, we should defer to black Americans’ own perceptions of how the police treat them. As various polls have demonstrated, black people are much more likely than white people to think that police violence against minorities is very common. But the issue cannot be settled this way.

Since individuals have direct knowledge of what happened to them personally, you can trust them about that. But when it comes to larger social phenomena, people’s beliefs are influenced by far more than just their personal experience, including the media. The far more compelling fact is that, if you draw a representative sample of the population and ask each black man in that sample whether a police officer has used physical force against him in the past year, you find that it’s extremely rare.

On many issues, liberals have no problem recognizing this problem. For instance, there is a cottage industry of articles deploring the fact that, although crime has fallen spectacularly in the U.S. since the 1990s, most Americans believe it has increased. Liberals are absolutely right to point out this misperception, but if people of any color can be wrong about this, there is no reason to think black people can’t be wrong about the prevalence of police violence against minorities.

Re: Police Violence against Black Men Is Rare