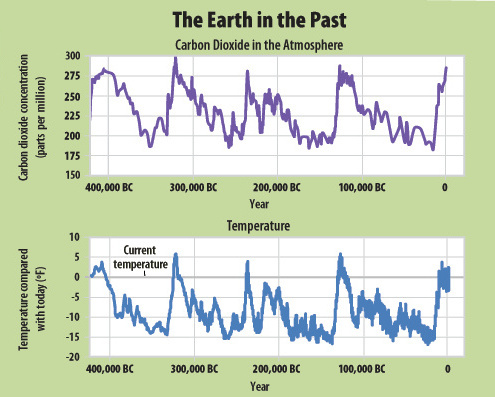 The carbon dioxide and temperature graphs come from an EPA website.
"Scientific graphs" with ~80 years of CO2 are only 0.02% of this data set.


Over at least the last 650,000 years, temperatures and carbon dioxide levels in the atmosphere have increased and decreased in a cyclical pattern.

Clearly there's a cyclical pattern and humans are definitely not the cause.
This is 2002 data, but I was told a similar theory in college in the 1990s.


Thanks to new calculations by a Dartmouth geochemist, scientists are now looking at the earth's climate history in a new light. Mukul Sharma, Assistant Professor of Earth Sciences at Dartmouth, examined existing sets of geophysical data and noticed something remarkable: the sun's magnetic activity is varying in 100,000-year cycles, a much longer time span than previously thought, and this solar activity, in turn, may likely cause the 100,000-year climate cycles on earth. This research helps scientists understand past climate trends and prepare for future ones.

Published in the June 10 issue of Earth and Planetary Science Letters (Elsevier, volume 199, issues 3-4), Sharma's study combined data on the varying production rates of beryllium 10, an isotope found on earth produced when high-energy galactic cosmic rays bombard our atmosphere, and data on the past variations in the earth's magnetic field intensity. With this information, Sharma calculated variations in solar magnetic activity going back 200,000 years, and he noticed a pattern.

Over the last 1 million years, the earth's climate record has revealed a 100,000-year cycle oscillating between relatively cold and warm conditions, and Sharma's data on the sun's magnetic activity corresponded to the earth's ice age history.

"Surprisingly, it looks like solar activity is varying in longer time spans than we realized," says Sharma. "We knew about the shorter cycles of solar activity, so maybe these are just little cycles within a larger cycle. Even more surprising is the fact that the glacial and interglacial periods on earth during the last 200,000 years appear to be strongly linked to solar activity."

Sharma's calculations suggest that when the sun is magnetically more active, the earth experiences a warmer climate, and vice versa, when the sun is magnetically less active, there is a glacial period. Right now, the earth is in an interglacial period (in between ice ages) that began about 11,000 years ago, and as expected, this is also a time when the estimated solar activity appears to be high.

Beryllium 10 is useful for studying the geology from hundreds of thousands of years ago mainly because it has a half-life of about one and a half million years. In addition, there are two key factors that have affected beryllium 10 production over the last 200,000 years: the earth's magnetic field and the sun's magnetic activity. When there are high-intensity solar magnetic storms, more charged particles are interacting with cosmic rays, and less beryllium 10 is produced. Likewise, the earth's magnetic field changes the flux of cosmic rays into and out of the atmosphere.

Since the production rate of beryllium 10 and earth's magnetic field intensity are known for the last 200,000 years, Sharma could calculate solar magnetic activity for this time period.

"I took sets of existing, independent data and made new comparisons and calculations," says Sharma. Then he went a step further to make a connection with the history of ice ages by looking at oxygen isotopes in the oceans, which reveal the history of how much ice was at the poles and are therefore a measure of average global surface temperature.

"I compared the estimated past variations in the solar activity with those of the oxygen isotopes in the ocean. Although there is a strong relationship between solar activity and oxygen isotopic variations, it is too early to say exactly what is the mechanism though which the sun is influencing the terrestrial climate."

One explanation of the 100,000-year cycle was offered by the Milankovitch Theory of Ice Ages in the 1940s, which suggested that the cyclical variations in the earth's orbit around the sun result in the earth receiving varying amounts of solar radiation that, in turn, control the climate. This explanation is under dispute because the variations of the solar energy in relation to the changes in orbit are very small. Other current research focuses on past variations in the sun's irradiance, or heat intensity (as opposed to the magnetic activity).

Sharma notes that more analysis is needed to test his theory. "I've only looked at 200,000 years. My calculations need to be verified for a million years, for instance. Plus, regarding the current global warming debate, it still needs to be examined if the role of solar activity will exacerbate the rising temperatures that result from carbon dioxide buildup in the atmosphere."

This work was supported by Dartmouth College, the Max Planck Institute and by a grant from the National Science Foundation.

Does "man-made climate change" exist? Sure, but it's probably immeasurable.
We're not causing "catastrophic" climate change, as the alarmist media claims.
The greater change in climate is cyclic and far beyond the control of us humans.