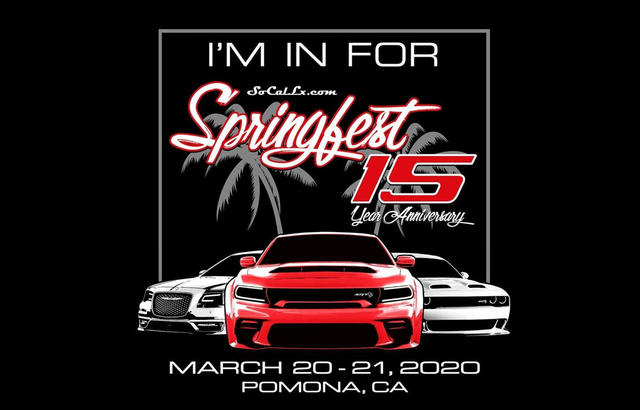 
FCA sure loves its Easter Eggs. Could this point to a Charger SRT Demon?

Since the Dodge Challenger SRT Demon first debuted for 2018, with 808 supercharged horsepower (840 on race gas) from a modified version of the Hellcat's blown 6.2-liter Hemi V8, enthusiasts and pundits alike have wondered if and when that engine might make its way into the Challenger's big brother, the four-door Dodge Charger.

The answers to those questions, it turns out could be "yes," and "soon." The emphasis here is on the word "could," but a potential Easter Egg worked into a promotional image for the Mopar-focused Spring Festival of LX 2020 hints at the possibility that the Demon's super-potent V8 could be in the Charger's future.

Seen above, the promotional Springfest image depicts a Dodge Charger SRT with a Hellcat logo tucked away in the corner of the grille - pretty standard. Look closer, however, and you'll note that the hood has a massive mail slot, spanning nearly the full width of the panel - much like the SRT Demon had.

Apart from that, it looks pretty much like an ordinary Charger SRT Hellcat Widebody, with the same body-color bar spanning the upper grille, creating a slender opening. We'll remind you that the Dodge Challenger SRT Hellcat Widebody was, in fact, preceded by the Demon, effectively just taking that model's flared fenders and deeper wheels for itself.

Of course, a more aggressive hood does not a Demon make, and it's a distinct possibility that FCA might choose to recycle its Demon-influenced hood on some other special-edition Charger model. Goodness knows FCA loves its special editions.

At the very least, we can say with some confidence that the big-snout hood points to some future SRT special; FCA loves to hint at future product launches through cryptic Easter Eggs, and this wouldn't be the first time the automaker used Springfest, specifically, to gesture at a forthcoming model.

Dodge has trickled down hoods before, so I don't think this guarantees anything.
Although how cool would it be for them to release an 800+ horse family sedan?