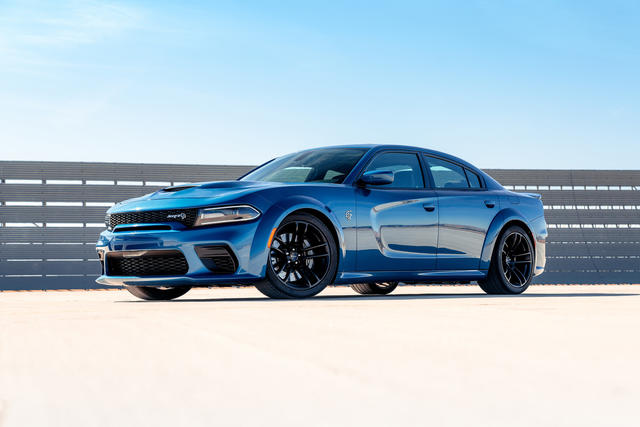 
Like the word brunch, which combines breakfast and lunch, Mopar is a portmanteau, the combination of “motor” and “parts.” Mopar was originally used by Chrysler back in the twenties, but it officially became a brand in 1937, first appearing on a can of antifreeze sold by Chrysler Motor Parts.

Today, as in the original muscle car era, Mopar is the name of Fiat Chrysler Automobiles’ parts and service division. If you walked up to your local Plymouth dealer’s parts counter in 1968 and bought some bits for your Hemi Road Runner, the box would have said Mopar on the side, just as it would today if you bought a new supercharger belt for your Dodge Challenger Hellcat online.

At some point in the 1960s, Mopar became catch-all slang for cars built and sold by Chrysler, Dodge, and Plymouth. Over the years its reach grew to include earlier brands like DeSoto and Imperial and, eventually, Jeep and Ram. “Mopar or no car” is the cry of the faithful; “Mopar guy” a badge of honor to many.

Here are 16 Mopar muscle car facts every enthusiast should know.

For the first few years of Hellcat production the supercharged 6.2-liter Hemi V-8 was rated at 707 horsepower at 6000 rpm and 650 pound-feet of torque at 4800 rpm. And it still is, in the current Dodge Challenger Hellcat Widebody and Jeep Grand Cherokee Trackhawk. But here’s a little secret. At 6100 rpm the engine produces 717 hp. Although the eight-speed automatic is programmed to upshift at 6000 rpm and the cars all have a 6200 rpm fuel cutoff, if you shift manually and hold the gears a bit longer, you get 10 extra ponies.

The Daytona was faster than the Superbird

Homologation specials created to legalize their aerodynamic shapes for NASCAR competition, just 503 1969 Dodge Charger Daytonas were sold and Plymouth built only 1935 examples of the 1970 Plymouth Road Runner Superbird. Some say that number is lower. Although the two big-winged cars look similar, their shapes, nose cones, and huge rear spoilers are actually quite different and the Daytona proved more aerodynamically efficient. A Superbird has a .31 coefficient of drag while a Daytona’s Cd is .29. On the high banks of Daytona and Talladega, this gave the Daytona 1–3 more mph, a significant advantage during a 500-mile race.

It’s been reported that 10,904 426 Hemi-powered street Mopars left Dodge and Plymouth assembly plants between 1966–71. The engine was available in a litany of models and bodystyles over the years, including fan favorites like the Plymouth ’Cuda and Dodge Charger. Tied for the rarest are the 1970 Dodge Coronet R/T convertible and the 1966 Dodge Coronet four-door sedan. Only two of each were built and all four cars survive today.

Anyone who has ever crawled underneath a Mopar muscle car from the 1960s is familiar with the torsion-bar front suspension, a unique design used extensively at the time. The first Mopar to get this setup was the 1957 Plymouth Fury, the car that won Motor Trend’s Car of the Year.

Most consider the 1964 Pontiac GTO to be the first “muscle car,” while many in the Mopar camp champion the 1967 Plymouth GTX and Dodge Coronet R/T. Jim Wangers, considered the godfather of the GTO, disagrees with both assessments. He considers the 260-hp 1956 Dodge D-500 and the even-hotter 1957 Plymouth Fury V-800 to be the first true muscle cars. These models weren’t Hemi-powered. The 318-cubic-inch engine V-8 used Chrysler’s polyspherical cylinder head, and the V-800 was packing a dual-quad version with 290 hp.

In 1972, with pressure from the insurance industry and the U.S. government, the automakers changed the way they rated an engine’s horsepower from “gross” to “net.” The revised system dropped power ratings across the industry. Although the wedge cars of the early 1960s and the 426 Hemi were rated over 400 hp, they were rated with the “gross” system. The first Mopar to produce 400 hp from the factory under the “net” system was the 1992 Dodge Viper. Its 488-cu-in V-10 was rated at 400 hp and 450 lb-ft of torque.

The differences between the 1970 Barracuda and Challenger

The third-generation of the Plymouth Barracuda and its sister car, the first Dodge Challenger, debuted for 1970. Although the two cars share platforms, track widths, engines, and proportions, they’re not exactly the same. The Challenger’s 110-inch wheelbase is two inches longer than the Plymouth’s and its overall length of 191.5 inches is three inches longer. That first year, performance buyers preferred the Dodge by a slim margin. Americans bought about 20,750 Challenger R/Ts and T/As that year, compared to roughly 17,250 ’Cudas (AAR models included).

Mopar started racing the 426 Hemi in 1964 but didn’t release it in street cars until 1966. It did, however, build six “prototypes” in 1965 and let the media drive a couple of them, including a Coronet 500 hardtop with a Torqueflite and a Coronet post coupe with a four-speed. In his book Day One, Marty Schorr chronicles his time in both cars and says the Dodge engineers told him the hardtop ran consistent mid-13-second quarter-miles at 100–102 mph.

Throughout the muscle car era many cars were sold with fiberglass hoods, but Mopar was the only manufacturer willing to sell you a car without hood hinges. To save weight and improve engine access, the A12-optioned 1969 ½ Dodge Super Bee and Plymouth Road Runner were powered by the triple-carbureted 440 and had a race-style, lift-off fiberglass hood with no hinges, just four hood pins.

In 1968 Dodge and Plymouth decided to sell factory-built race cars for NHRA Super/Stock competition. For racers only, the company built 29 Barracudas Fastbacks (code BO29) and 80 Dart Super/Stocks (code LO23), fitted with race Hemis with 12.5:1 compression, headers, and dual Holley carbs on a special cross-ram manifold. The cars were not street legal and featured fiberglass front fenders and hoods, lighter front bumpers, thinner glass, deleted back seats and lighter front seats from a Dodge van. Some are still racing today.

Although 1960s muscle cars and hood scoops have become synonymous, true functional hood scoops didn’t come into vogue on factory stock machines until the later half of the decade. The first Mopars sold off the showroom floor with such a device to feed fresher, cooler air into the engine were the Hemi Darts and Barracudas sold in 1968, but they weren’t street-legal machines. The first street-legal Mopars with factory-installed functional scoops were equipped with the N96 cold-air induction system in 1969. Better known as Ram Charger on Dodges and Air Grabber on Plymouths, it remained an option through 1972. It was first offered on the Super Bee, Coronet R/T, Road Runner, and GTX with 383 or 440 engines and was standard with the Hemi.

Another homologation special, this time for Trans Am racing, the 1970 Dodge Challenger T/A and 1970 Plymouth AAR ’Cuda were the first American muscle cars with staggered tires—wider rubber in the back than the front. In March and April of 1970, 2400 T/As and 2724 AARs were built, each wearing 15-inch E60 white-letter Goodyears up front and wider G60s in back.

Mopar jumped on the multiple-carburetion trend of the mid-1950s when it installed dual quads on the 1955 Chrysler C-300. Although three carbs became popular with Pontiac in 1959 and Ford in the early 1960s, and the trend expanded to others like Oldsmobile in the middle of the decade and to Chevy’s Corvette as of 1967, Mopars didn’t get triple carburetion until the A12-optioned, 440-powered 1969 ½ Dodge Super Bee and Plymouth Road Runner. While the triple-carb setup was called Six Pack by Dodge, the 390-hp engines were identical. A year later, the 340 small-block in the Challenger T/A and AAR ’Cuda also got three deuces.

The stock 440 was quicker than a stock Hemi… sorta

In 1969, High-Performance Cars magazine tested a 425-hp Hemi Road Runner with a Torqueflite automatic, one of just 162 built that year. On its factory-installed 14-inch F70 street tires and with its Air Grabber cold-air induction system open, it ran a best quarter-mile time of 13.32 seconds at 107.65 mph. It also managed a 13.28-second run on slicks, all equipped with a 4.10 rear end.

Ever wonder why Mopar built exactly 640 440-powered Dodge Darts and 360 440-powered Plymouth Barracudas in 1969? Because the NHRA rulebook required 1000 cars to be built with that A13 option before the big-block RB-powered A-bodies would be legal for competition. Ever wonder why they were all built with the 727 Torqueflite three-speed automatic? It’s because Dodge and Plymouth paired that transmission with the company’s 8 3/4-inch rear end. A four-speed manual would have required a stronger Dana 60, which was too wide for a Dart with stock rear wheel wells. The Hemi-powered LO23 Darts were available with either transmission, and they all got the Dana 60, but their rear wheel wells were cut out to fit the wider rear end and larger tires.

Which Mopar muscle car facts would you add to this list? Share your must-know Mopar details in the Hagerty Forums.