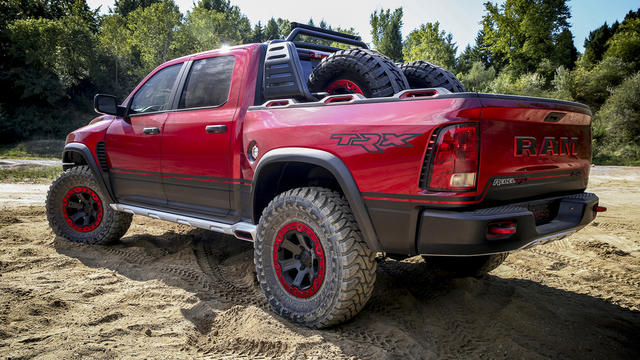 
Buried in the depths of a large press release on Ram’s history as a standalone brand was a golden nugget: the Hellcat-powered Ram TRX pickup has been approved for production. Details are not yet available, but at the time the TRX was shown, FCA sources told Allpar that the plan was to produce the truck after the next generation went into production.

The concept Ram 1500 Rebel TRX was powered by a 575 horsepower, supercharged 6.2 liter Hemi, with 37 inch Toyo tires and six-piston calipers. It has side-exiting exhausts ahead of the rear tires, built into the rock rails; steel bumpers, skid plates, and “all the cooling you’d want.” It has two spares, and six-point harnesses to hold the driver and passengers in.

Why, people ask, is it “only” 575 hp, when the Challenger does 797 with the same engine? Our guess is two-fold: so you can still control the truck, and because it’s a 4×4, and the transfer case and other powertrain parts can only take so much.

Jim Morrison said it could “handle the harshest terrains at speeds over 100 mph,” aided by a full 13 inches of suspension travel, at all four corners. To support all that suspension movement, they had to make the fenders six inches wider than those of a normal Rebel, resulting in an hourglass shape (as seen from above).

The transmission is the “TorqueFlite Eight,” an eight-speed automatic, with paddle shifters. The 4×4 performance control system works with the BorgWarner 44-45 transfer case, with user-selectable normal, wet/snow, off-road, and Baja modes.

The front and rear axles have severe duty components, and the 13” wheel travel is over 40% more than the normal nine inches front, 9.25 inches rear. Adjustable front and rear bypass shocks are included.

The standard Ram 1500 front axle is used with an open differential and custom constant-velocit half-shafts to handle the wider track; spindles were moved forward to make room for the 37 inch tires. The rear axle is a Dynatrac Pro 60, which uses a selectable electric locker to 35-spline, 1 1/2 inch axle shafts. The locker is available on all modes and “commits both rear wheels to traction at the same speed, spreads the torque load and maximizes the tractive effort (power put to the ground) in full-throttle maneuvers.”

The unique from grille was needed for extra airflow. Inside, it adds not only the six-point harnesses but leather/suede seats, carbon-fiber trim, and new materials and colors.

The frame is “virtually unchanged” from the standard one. The front suspension uses custom-built upper and lower A-arms with special attention to caster and camber angles during suspension cycling. The goal was to have a smooth ride over smaller bumps, and when the bumps become mounds, to have high reaction speed and heat dissipation to avoid shocks while keeping full traction.

The Ram 1500 link coil rear suspension system shares its basic architecture with desert racing trucks; the frame’s hard points for the suspension were unchanged. The 2.5-inch bypass shocks use factory mounts, but performance rear coil springs were put into the factory-spec positions.

The factory hydraulic-boost compensation unit was kept but calipers were swapped out for Baer six-piston monoblock calipers with 15 inch rotors up front, 14 inch rotors in back.

High-speed off-road truck racing teams commonly use a 37-inch tire for its height and durability; hence the Rebel TRX’s 37 inch high tires, 13.5 inches wide, with a 10-ply design and custom Mopar beadlock wheels (which pinch the outside of the tire to the rim). The two complete spare tire and wheel packages, with tools and jack in lockable storage in the bed, reflect the rigors of off-road racing.

Whether the real production Ram Rebel TRX will closely adhere to the concept or not, we don’t know; but we do know Ram intends to dominate all competitors with this one.

I'm excited to hear if this legit. I hope they don't neuter the Hellcat too much.