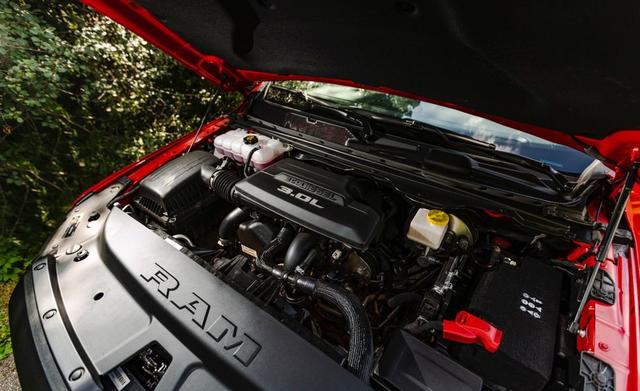 That the 2020 Ram 1500 Rebel EcoDiesel returned 24 mpg in our 75-mph highway fuel-economy test is remarkable by itself. But when considered against the 18 mpg returned by its counterpart, the Ram 1500 Rebel equipped with a gasoline-burning 5.7-liter Hemi V-8, the diesel is truly compelling. Its fuel-economy number, however, comes with at least one caveat.

Both trucks we tested were all-wheel-drive Rebel off-road models with the same final-drive ratios, tires, and cab and bed configurations. But despite Fiat Chrysler's bold insistence that the EcoDiesel will be on sale before the end of the year, it has not yet received EPA emissions certification. The EPA's fuel-economy estimates are still forthcoming as well. Put simply, there's no way to know if the engine calibration we tested here will be the one Ram will eventually sell.

Still, in daily driving, the difference in fuel economy is even greater than on the highway. Our diesel-powered Rebel averaged 20 mpg, while its gas counterpart swilled a gallon of regular every 14 miles. However, even this substantial difference requires driving more than 86,000 miles before fuel-cost savings overcome the $3000 premium Ram asks for the EcoDiesel over its also optional Hemi V-8. And because we've only tested the off-road-oriented Rebel, comparisons to the light-duty Ford F-150 Power Stroke mean very little. The GMC Sierra 1500 AT4 is available with GM's new 3.0-liter inline six diesel and earned a 24 mpg combined rating from the EPA, which is suspiciously identical to the other diesel-equipped 4WD Sierra models despite its two-inch greater ride height and larger off-road tires.

But this is a stronger EcoDiesel than before. Its output climbs to 260 horsepower and 480 lb-ft of torque, up from 240 horses and 420 lb-ft, thanks in part to a more efficient turbocharger. The engine is heavily redesigned, including a 15-pound-lighter iron block, but it retains its 60-degree 3.0-liter V-6 configuration. Like other light-duty diesel truck engines, this one is an unobtrusive partner. At cruise and idle it's not discernible as a diesel from the driver's seat, although some diesel clatter is audible at certain speed and load combinations. ZF's excellent eight-speed automatic remains the only transmission available.

Even in crew-cab Rebel form, the Ram EcoDiesel hit 60 mph in 8.1 seconds—0.9 second quicker than the 2015 Ram 1500 EcoDiesel 4x4 crew cab we last tested. But it's well off the pace of its Hemi V-8 counterpart, which required only 6.4 seconds to eclipse 60 mph. And although Rams equipped with the EcoDiesel are rated to tow up to 12,560 pounds depending on their configuration, this Rebel had a rating of just 9590 pounds. And it's hard to ignore that the nearly identical yet cheaper Hemi-powered Rebel offered an 11,340-pound rating.

Otherwise, this is the same Ram we've already praised as a comparison-test victor and a 10Best winner. It comes with the same immaculately finished interior, and both its standard coil-spring suspension and optional air springs yield the best ride quality among half-ton trucks. And the diesel is available in every trim level, from the workaday Tradesman to the opulent Limited.

Chrysler says it will begin selling EcoDiesels before the end of the year, but that assumes the engine's federal certification adheres to Ram's timeline. History, however, shows that EPA roulette is a game that often doesn't fall in an automaker's favor. But assuming the production EcoDiesel can equal this tester's fuel economy, it's a powertrain that only becomes more attractive as mileage increases.

I know, not a HEMI, but still cool if you're into diesels.