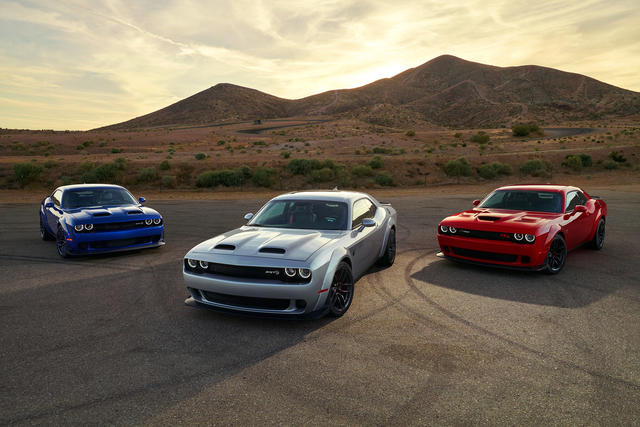 One of the aspects of the Dodge Challenger which has made it so popular since the nameplate was first introduced back in 1970 was the bright, bold exterior colors. Dodge has long been known for offering “high impact colors” and the 2020 model year is no different. In addition to 9 of the colors from the 2019 model year returning, Dodge has added 3 new exterior color options, including the Frostbite blue hue that formally debuted back in June on the new Charger Hellcat Widebody.

Also, while the interior colors are significantly less radical, the 2020 Dodge Challenger also gets a new interior look with select packages, with five different layouts for the new model year.

2020 Dodge Challenger Exterior Colors
The 2020 Dodge Challenger exterior colors that are returning from 2019 include F8 Green, GoMango, Granite Crystal, Indigo Blue, Octane Red, Pitch Black, TorRed, Triple Nickel and White Knuckle. The new colors, all of which are late availability options that won’t be in the order banks when these cars first go on sale later this year, include Frostbite, Hellraisin (shown at the top of this piece) and Sinamon Stick. We don’t know when they will arrive, but in past model years, the late availability colors have shown up in the dealership ordering system after the first of the calendar year. If that is the case, these three colors could be available for order starting in January, if not sooner.

For those unsure, Frostbite is the new metallic blue that debuted on the 2020 Dodge Charger SRT Hellcat Widebody (shown just below this), Hellraisin is a dark metallic purple, similar (if not identical to) Black Eye and Sinamon Stick is an orangeish-red metallic.

There were 15 exterior colors offered for the Challenger during the 2019 model year, so six have been removed for the initial palate for 2020. Gone from the 2019 lineup are B5 Blue, Destroyer Gray, Maximum Steel Metallic, Sublime, Plum Crazy and Yellow Jacket.

In many cases, new colors replace similar colors from past model years, and it can be argued that Frostbite is effectively replacing B5 Blue and Hellraisin is replacing Plum Crazy, but it is surprising that Sublime is once again removed from the lineup, along with the popular Destroyer Gray. Of course, it should be noted that these colors could pop up later in the model year, as B5 Blue was not on the initial option list for the 2020 Charger, but it has been announced as a unique color for the Daytona 50th Anniversary Edition Hellcat, so some of these colors could still be offered on the 2020 Challenger.

2020 Dodge Challenger Interior Colors
As was the case for the 2019 model year, the 2020 Dodge Challenger is offered with a collection of interior color packages that include all-black (in all leather, all cloth or suede-and-leather), black-and-Ruby Red suede, Demonic Red leather (that also has black trim) and Sepia, which is a medium brown leather with black accents.

New for 2020 is the black-and-caramel interior package for the Challenger GT, R/T and R/T Scat Pack models. There don’t seem to be any pictures of this new color package, but it is an Alcantara suede package, so it could be similar in color to Sepia with the difference being that the Sepia package has leather seats whereas caramel has suede.

Frankly, I am kind of surprised that the Hellcat models aren’t offered with the caramel Alcantara package, as the Sepia option is popular with buyers who don’t want the all-black cabin, but not everyone likes the full leather seat. Perhaps the black-and-caramel will be part of a Hellcat package in the future, but for the time being, it is only available for the GT, R/T and Scat Pack.

While the color palate changes for the 2020 Dodge Challenger aren’t dramatic, the new Frostbite blue has already proven to be very popular among Mopar fans on social media and people have been raving about Black Eye since it was introduced on the 1320 in concept form last year. That is likely to be a popular option as well, and as for Sinamon Stick, orange-red metallic seems like it will give those folks who want a “notice me color” one more choice.

As someone who's hopefully in the market for a 2020 Challenger next year, I'm sadden to see Sublime going away. Actually the same concern about losing B5 Blue and Plum Crazy, but maybe Frostbite and Hellraisin will be similar enough. I'm curious what Sinamon Stick is going to look like. I would want to get a nice, bold color for my Challenger.