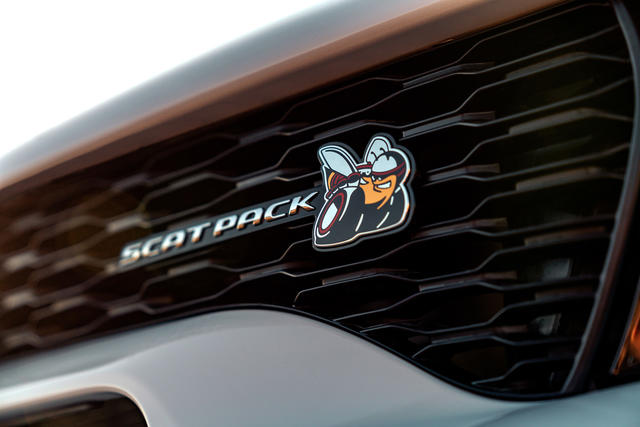 
The 2016 Dodge Challenger R/T Scat Pack is my pick for the best of the breed when it comes to the retro-themed muscle car. The Scat Pack checks all the right boxes: 485 horsepower from a 6.4-liter Hemi V8, the quicker steering, stiffer suspension, and bigger brakes found in the standard Super Track Pak package, a louder exhaust system, and the availability of the ‘Shaker’ intake option, which sticks up through a hole in the middle of the car’s hood and rumbles every time you rev the engine.

Almost as important was what the Scat Pack brings to the table is what it chooses to leave behind. Unlike the SRT 392 model, the Challenger R/T Scat Pack doesn’t ask you to pay more for a ‘track ready’ chassis, adaptive suspension, or 6-piston Brembo brakes up front, gear you don’t really need because Dodge’s chunky coupe simply isn’t intended to be enjoyed on a road course. Instead, the Challenger comes into its own as a comfortable, style-first driver, and the acres of bad attitude that come with the Scat Pack edition are perfectly suited for boulevard cruising or drag strip histrionics.

The most fun version of the 2016 Dodge Challenger actually has a history that goes deeper than most of the modern marketing used to move muscled metal. The ‘Scat Pack’ was once one of the most feared groups of street machines every to rumble from one stoplight to the next, and the Challenger Scat Pack is a fitting tribute to that exciting period in Detroit’s high performance history.

Let’s take a quick look at the history of the Scat Pack.

The late 60s represented the fiercest period of competition between the Big Three (and to a lesser extent, AMC) for the attentions of speed-thirsty American buyers. By the time 1968 rolled around, Dodge was in the catbird seat with its line-up of fierce street machines, including the Dodge Coronet R/T, the Dodge Charger R/T, and the Dodge Dart GTS, each of which could be ordered with an (underrated) 375 horsepower, 440 cubic inch V8 under the hood. A 340 cubic inch Dart Swinger was also available, and of course 426 Hemi power was also in the cards for all three models.

What was missing, however was a way to unify each of these uniquely-named models under a single, world-beating banner – an issue that would only get worse with the introduction of the Dodge Super Bee mid-year. The problem was put to the talented team at the Ross Roy Ad Agency, which came up with the idea of the ‘Scat Pack’ designation that would encompass each of these cars. It was a play on words – the Rat Pack had been Sinatra’s gang of Hollywood pals that became legendary for their partying and the pictures they made together – and as such Dodge also created an actual Scat Pack Club that both owners and Mopar fans could join for the very affordable price of three dollars. For the money, members received a monthly newsletter, a quarterly magazine, a wallet card declaring their loyalty, a bumper sticker and jacket patch, and a racing guide.

The Scat Pack logo was a variation on the drag-racing Super Bee found on, well, the Dodge Super Bee, and collectively the group of cars was referred to as ‘the hive.’ The marketing team went on the warpath, blanketing dealerships, magazines, and television with references to ‘Scat City’ and the full line-up of Scat Pack cars. By 1970 the family had ground to include the Charger Daytona and the Dodge Challenger, and when the final year of the Scat Pack came to pass the Dodge Demon 340 was also included. So successful was the entire initiative that Plymouth got into the act with its ‘Rapid Transit System’ which would run from 1970 to 1972, and included the ‘Cuda, the GTX, the Superbird, the Duster 340, and the Roadrunner.

1973 spelled doom for most American muscle cars as insurance concerns and emissions regulations slowly choked the life out of large V8s – a sad state of affairs that would last until the mid-80s. Still, for a brief shining moment the Scat Pack demonstrated what could be accomplished with just a little creativity and a lot of horsepower, and paved the way for its own revival many decades later.