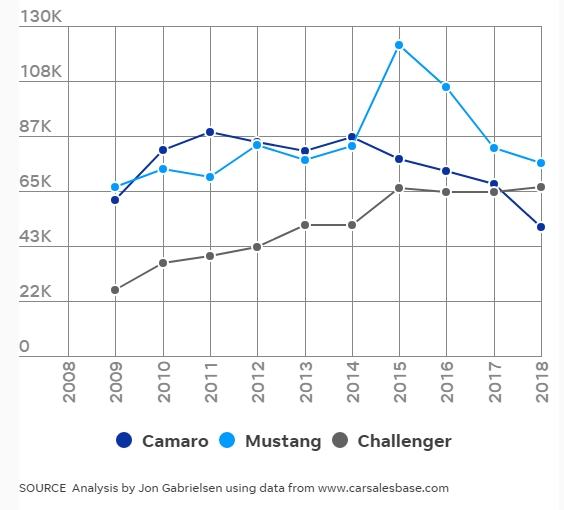 This is about the battle over speed. And muscle.

A quiet fight has been raging over which car holds the No. 2 spot in the sports car category.

And now Dodge Challenger has solidly overtaken the legendary Chevrolet Camaro. It had the best year ever in 2018 and continues gaining market share at an astonishing rate, analysts say.

Models named “Demon” and “Hellcat” have led to an impressive presence on Facebook with more than 5.2 million followers. The average buyer age is 51.

These men (and women) drive two-door coupes that go from 0 to 60 miles per hour in 3.4 seconds.

“The first generation of Mustang, Camaro and Challenger are the top collected vehicles in North America and transcend all generations. People have speculated about the death of the American muscle car since the mid-1970s, but the golden age of American muscle is happening right now in terms of horsepower and overall performance,” said Jonathan Klinger, spokesperson for Hagerty, the Traverse City-based collector car insurance and valuation company.

“Muscle cars are important to automakers because the owners are the most enthusiastic brand champions for them. Friendly muscle car rivalries are just as fierce amongst owners as they are between the manufacturers,” he said. “If a company wins the heart of an enthusiast through a muscle car, they are likely to also sell them other vehicles, such as trucks and SUVs.”

Trucks generate huge profits for auto companies, money that’s spent on research and development for future products. Sports cars go to legacy. They are about pride and bragging rights.

With Ford continuing to dominate the highly lucrative truck war with its F-Series, the Dearborn-based automaker is also leading the sports car segment with the Ford Mustang, in the U.S. and globally.

“It’s a highly emotional segment,” said Jiyan Cadiz, the Ford Mustang communications manager. “At the end of the day, who’s keeping it exciting?”

“It is a niche segment and we’re determined to compete,” said Lauren Langille, GM spokeswoman. “We’ve made significant gains with our more affordable options and have maintained share with our high-performance models. We expect continued strong momentum throughout the rest of the year.”

She noted that sales remain strong despite fewer buyer incentives.

General Motors is known for its commitment to limited rebates and price breaks.

Over the past decade, Mustang sales appear to remain flat while Camaro has seen a decline and Challenger has seen growth, according to Kelley Blue Book data:

Dodge Challenger has moved into the No. 2 spot for sports car sales in 2018, moving past Chevy Camaro for the first time in history. The trend illustrates a solid climb for Challenger and a steady drop for Camaro. Ford Mustang is holding the lead in a high-profile segment that caters to speed and performance.

“Muscle cars are all about brand image, promotion and profits," said John McElroy, host of “Autoline After Hours" and a longtime industry observer.

"Gearheads will pay a premium to get the performance they want, and they tend to be die-hard brand loyalists. Muscle cars bring gawkers into the showrooms even if they can’t afford them, giving dealers the opportunity to sell them something else."

The difference between basic models and fancy “trim packages” is significant. It might be compared to taking the bus rather than flying first class.

Sticker prices on Mustang, Camaro and Challenger can rival Porsche and BMW.

Robert Davidman, an advertising executive at The Fearless Agency on Madison Avenue, attended the New York International Auto Show in April and said the public love for Challenger is obvious.

“When I was at the auto show, the crowds were packed around the Challenger versus what I saw around the Camaro," he said.

“Advertising works when the consumer is surrounded by messaging. Just running an ad on TV won't do it alone," Davidman said. "The Challenger has been integrated into programs beyond the traditional advertising placements, shows like ‘Top Gear,’ ‘The Grand Tour,’ ‘Fast and Loud,’ ‘Motor Trend. Even ‘NCIS LA’ has used it.”

Regular people also drive interest on social media, he said. “But mostly, I would say that the simple answer is the car performs really well."

Challenger just launched its “Stars & Stripes” edition in New York, designed to enhance the company’s relationship with U.S. military service members and their families. This, too, is a prime example of a buzz model.

These vehicles deliver a custom look – which includes American flag fender decals – for buyers "who want to extend their passion for their country to their car,” said Steve Beahm, head of passenger car brands for Fiat Chrysler North America.

And Dodge can make the vehicle “even more sinister," as needed.

When Challenger buyers confess to have had interest in Mustang and Camaro, the "interior roominess" of Challenger often closes the deal, Dodge surveys say.

And while Mustang and Camaro are rear-wheel drive, Challenger offers all-wheel-drive.

Meanwhile, Fiat Chrysler has no plans to slow down.

“Coming off our best sales year ever in 2018, Dodge Challenger continues to gain market share,” Beahm said. “Challenger represents a carefree, youthful lifestyle and resonates with the young, and the young at heart, in a unique way.”

No question, the language around Dodge Challenger creates intrigue.

“New for 2019, the Dodge Challenger SRT Hellcat Redeye is possessed by the Demon. Its 797-horsepower supercharged HEMI high-output engine makes it the most powerful, quickest and fastest muscle car reaching 0-60 miles per hour in 3.4 seconds and the fastest GT production car with a ¼-mile elapsed time of 10.8 seconds at 131 mph. It also reaches a new top speed of 203 mph," says a Fiat Chrysler preview.

Yet the segment remains larger than the electric vehicle and luxury full-size SUV categories, which were led by the Tesla Model 3 and Mercedes GLS, according to Kelley Blue Book.

“The popularity of SUVs is making life tougher for anything that isn’t an SUV, including two-door performance coupes like the Camaro, Challenger and Mustang,” said Karl Brauer, executive publisher of Kelley Blue Book.

“In this atmosphere, it’s not surprising to see the segment’s sales decline, though that also makes the Challenger’s growth over the past decade impressive. The Mustang’s U.S. sales are bolstered by strong sales in other markets due to its strong global awareness and iconic nature. These trends suggest the Challenger and Mustang will continue to be a part of Dodge and Ford’s product plans in the coming years," Brauer said. "The Chevrolet Camaro’s drop in domestic sales, along with its lack of global sales, make its long-term prognosis a tougher question to answer.”

Analysts praise Fiat Chrysler for a rarely discussed strategy that maximizes the profit margin of the Challenger for the Auburn Hills-based automaker. Challenger and the four-door Charger, which has similar architecture, are both assembled in Brampton, Ontario.

Purists say the Charger, which has a longer body than the Challenger, is not a muscle car because it has more than two doors.

“But by having the Charger, FCA has damn near doubled the volume," McElroy said. "It ends up making the Challenger even more profitable.”

Charger, which is sold to individuals and police, actually outsold Mustang, Camaro and Challenger in 2018 with 80,226 vehicles.

“We don’t break out fleet sales, but Charger has led the large car segment for the past five years due to a similar strategy as Challenger,” said Kristin Starnes, Dodge spokeswoman.

“Charger is often referred to as 'the four-door muscle car' because these sister cars share common muscle car DNA. In fact, the Charger’s bandwidth is unequaled in that Dodge offers something for every need. From best-in-class V6 fuel economy to the highest top speed of any four-door production car on the planet,” she said.

“Here is a really old vehicle and it’s outselling the newest and the best from Ford and Chevrolet,” McElroy said. “It’s a practical car. If you want blinding fast performance, you can get a Challenger or a Charger with a Hellcat or Hemi engine. You’ve got a big back seat (in both) that can comfortably fit five adults in the car or easily put two child seats in the back. You can’t do that with a Mustang or Camaro. It’s a second car for guys and gals who want to be weekend warriors.”

He added, “The Challenger isn’t as good a track car as the Camaro or Mustang but most people aren’t going to the track. You get all the panache, all the image, all the performance and you still put your family in it and go have a picnic.”

What is astonishing, he said, is that plans to overhaul the Challenger years ago were postponed for cost reasons. And it hasn’t hurt the product.

“Who has invested money the wisest and made the greatest return? The answer is easily Fiat Chrysler,” McElroy said. “I can assure you FCA is going to look at how little money they’ve put into the car and how many they’re selling."

Overall, Fiat Chrysler has seen a notable increase in its overall market share in recent years as compared to its domestic competitors.

That was a lot of verbiage, just concentrate on the graph.

Mustang has the best bang for the buck, Challengers are expensive, but I'm looking at getting 1 when I replace my '14 Mustang. It would be good to have both 4 & 2 door Chargers.
Top

I will need a new daily driver next year, and considering a 6-speed '15+ Challenger R/T.
I do not mind the Chargers having 4 doors, I just wish Dodge offered a 6-speed option.

I have a family AND want to row my own gears! (And the Chevy SS is out of my $ range.)
Scott Moseman
http://www.TheHEMI.com/
Follow us:

I was eyeing a couple of used '18 Challengers at a good price, but decided to wait a year.
Top
Post Reply
4 posts • Page 1 of 1