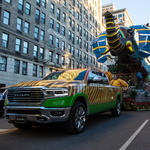 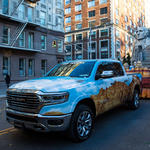 
November 22, 2018, Auburn Hills, Mich. - The Ram Truck brand joins and pays homage to the millions of Americans coming together this Thanksgiving Day in its new video “Thanksgiving Grace,” airing for the first time on television on Thursday, Nov. 22, during the 92nd annual Macy’s Thanksgiving Day Parade on NBC. The spot, which will air on broadcast as a 30-second commercial, will also run during the traditional holiday NFL football game on CBS. An extended 60-second version of “Thanksgiving Grace” can be viewed on the Ram brand’s official YouTube channel.

“Thanksgiving Grace” features a family celebrating the holiday, as the father reflects on all for which he is thankful. He recites the values of kindness, courage, beauty, confidence, and the love of his children and his wife. The spot ends with the tagline “Make the Next Generation Even Better. That’s Our Job. Happy Thanksgiving.”

Ram is the official truck of the Macy’s Thanksgiving Day Parade and, for the fourth consecutive year, more than 20 Ram trucks will be towing all the floats. This year’s parade is unique as two Ram trucks will be fully wrapped to match the float designs of the new Splashing Safari Adventure by Kalahari Resorts and Conventions and Mount Rushmore’s American Pride by South Dakota Department of Tourism. Also, for the first time, Macy’s most famous float of Turkey Tom will be built on top of a Ram truck, leading the entire parade. The parade is broadcast live Thursday, Nov. 22 on NBC, beginning at 9 a.m. in all time zones.

“On a day that millions join together with family and friends, it is an honor to continue to align the Ram brand with such an iconic American event as the Macy’s Thanksgiving Day Parade,” said Reid Bigland, Head of Ram Brand. “As our 2019 Ram trucks lead the parade, we celebrate the achievements of every person who puts their best foot forward at work every day, and for whom we continue our commitment to build the most efficient, durable and technologically advanced trucks in the market.”

In total, Ram provided the Macy’s Parade with 65 trucks and Ram ProMaster commercial vans, many of which are used for behind-the-scenes functions leading up to the parade start. Ram will not only help transport the larger-than-life floats down the Parade route, but will also assist in moving other Parade materials needed to produce the annual spectacle, from tool containers to costumes and much more, in the lead up to the start of the procession on Thanksgiving Day.

Continuing on the parade route, the Ram Truck brand will be heading to the 2018 Nashville Christmas Parade on Saturday, Dec. 1, benefitting the Monroe Carell Jr. Children's Hospital at Vanderbilt. As the title sponsor of the parade, Ram trucks will tow all of the parade floats, including the life-size gingerbread float constructed by the brand and revealed in the Ram brand’s "Ginger Builders" 30-second video.

“Thanksgiving Grace” was created in partnership with Austin-based agency GSD&M.

I didn't know there was an official truck of the Macy's parade -- let alone know it was RAM!
Scott Moseman
http://www.TheHEMI.com/
Follow us: