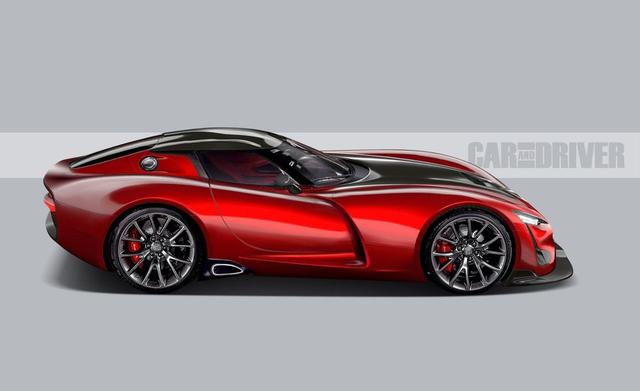 2021 Dodge Viper: A Motown Legend Is Reborn!
But with no V-10, will it move the faithful?
https://www.caranddriver.com/features/2 ... -is-reborn


What It Is: The second rebirth of a Motown legend. Not many details have surfaced yet, but trust us: A new Viper is happening.

Why It Matters: Since the fifth-gen Viper’s production ended in 2017, Dodge has lacked a true halo car. Sure, it has its supercharged trick ponies—Hellcat and Demon—but the Mopar faithful need something to put up against Chevy’s and Ford’s mid-engined sports cars.

Platform: As before, the new Viper will use a spaceframe with independent suspensions front and rear. A long hood with an engine tucked behind the front axle, a Viper staple, will remain. Learning from its unfortunate fifth-gen product-planning mistake, Dodge will offer a convertible from the beginning; the coupe comes a few years after launch. Aluminum and carbon fiber will proliferate, keeping mass as low as possible because the Viper is likely to lose a little grunt, at least to start.

Powertrain: Sorry, 10-pack fans, the Viper is downsizing. Chrysler is (finally) developing an aluminum-block V-8 to replace the aging iron-block anchor it calls Hemi. We’re guessing that a naturally aspirated V-8 will be the new Viper’s first engine. Taking a page from the Corvette team, Dodge SRT will likely offer the Viper in multiple performance levels. Think 550 horsepower to start and a supercharged 700-plus-hp variant (essentially a second-gen Hellcat engine) coming a year or two later. And if we know anything about the engineers at SRT, you’d better believe there will be a hard-core road racer in the works designed to challenge Porsche’s GT cars and Chevy’s upper-register Corvettes on the racetrack. A manual transmission will make it stand out against the increasingly automatic-only competition.

What Might Go Wrong: With Conner Avenue Assembly closed for good, it’s likely that a supplier will be tapped to bolt Vipers together, and that could lengthen the development time (think Multimatic-built Ford GT). We know SRT can build an amazing track car; FCA just needs to make sure it’s a track car that people actually want to own.

Estimated Arrival and Price: The January 2019 Detroit auto show will be the 30th anniversary of the Viper concept’s debut. It would be a fitting tribute for the next Viper to go public then, though we don’t expect to see it on the road until late 2020 as a 2021 model. Borrowing an engine from elsewhere in the FCA lineup might have a massive impact on the base price. As opposed to starting in the low six figures, the new Viper could broaden its appeal slightly by starting under $90,000.

Can you hear the bubbles bursting all over the Internet?

Dodge Refutes Rumors About New Viper
All hopes for a new Viper only lasted for a week.
https://www.motor1.com/news/243808/dodg ... er-return/


It’s a shame when you get your hopes all up about something and then suddenly, someone drops a bomb and tells you that it isn’t true. That’s the situation we’re in after the FCA CEO Sergio Marchionne says that the return of the Dodge Viper is “not in the plan” as he spoke with reporters in a press conference.

Automobile magazine’s Todd Lassa and Detroit Free Press’ Eric Lawrence shared the news via separate tweets, possibly the most heartbreaking tweets for the fans of the legendary Viper. 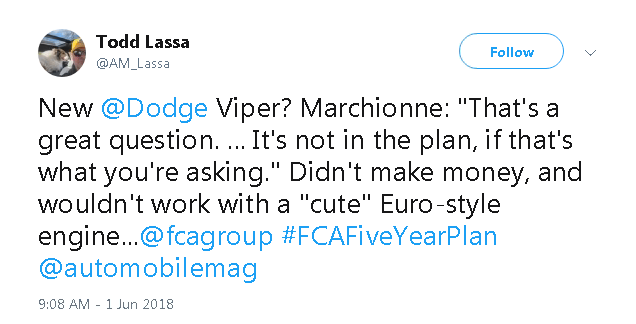 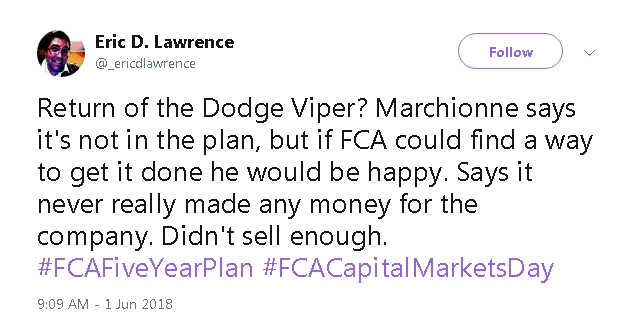 Just last week, a report of the Viper’s return circulated the web, which sparked a ray of hope for the supercar that was axed last August 2017. The rumors were from Car and Driver, saying that the Viper would return without a V10 under its hood but a more powerful V8 instead. Marchionne refuted both claims, even calling the European V8 “cute.”

The main reason for the cancelled return of the Viper is the same reason why it was halted in the first place – it didn't make money for FCA. But Marchionne didn't totally close the door for the snake. He said that he would be happy if FCA can find a way to get it done, but right now, it’s really not part of the plan.

What’s part of the plan, however, is that the Challenger and Charger won’t be built on top of the Maserati Ghibli’s platform as previously reported. Marchionne said that it will retain its current platform, but would be reworked extensively.

The FCA CEO also reported that Ram is to create a Mexico-made midsize pickup truck bound for the US. It will go up against the Chevrolet Colorado, GMC Canyon, and Ford Ranger.

The rags are saying it's going to happen. I sure hope it does!
Scott Moseman
http://www.TheHEMI.com/
Follow us: