Discussion of the prototype Hemis.

Originally thought of as a replacement for the wedge engines,
the "Ball Stud" Hemi was designed to be a cheap alternative to
compete with the low-cost Chevy big-blocks. They were based
on 2-bolt B-blocks, available in B and RB strokes, to make 404
and 444 cubic inch motors. The heads get Hemi chambers that
are slightly twisted and shallower than the 426 Hemi.

Here are some pictures and an excerpt from an article... 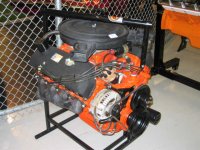 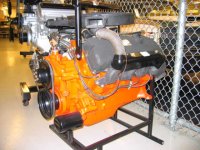 Does anyone else have any more information on these engines?
Also feel free to correct me if I am wrong with anything I stated.
Last edited by scottm on Wed Aug 24, 2005 8:17 pm, edited 3 times in total.
Scott Moseman
http://www.TheHEMI.com/
Follow us:

It sure is a shame that engine never made it to production.

Hot Rod had a pretty complete article on the ball-stud jobs in the early 80's (?) I lost that whole era from my collection, but with the vast resources of the internet I'm sure a copy could be found. Looked to be a decent setup if memory serves me. Lighter pistons than the hemi through the smaller chambers gaining quench and swirl, much less expensive machining required for the rocker gear, freer ports than the wedgies. Somewhere between an early poly and a 429 street boss chamber. Dick Landy's supposed to have one. Maybe he'd send pics and info?
Top

I updated my original post with the full article.
(Special thanks to Hemi Fred for those scans.)
Scott Moseman
http://www.TheHEMI.com/
Follow us:

Hi,
Yep HR did do the feature in the early 80's. But Popular Hot Rodding also covered it fairly recently too - within 1 or 2 years anyway. Weirdly, one of the Mopar magazines, Mopar Muscle ?, ran a picture asking if anyone new what it was ........
Doh !
Has anyone any knowedge if the last picture (a B-body ?) was a running car ?
Who did it belong to ?
Mike
Beep ! Beep !
Top

it was at Carlisle this year (2006) and it is apparently a running car - Tom Hoover's old barracuda test bed.

it was recently featured in a 2 part article in Mopar Collector's Guide - one on the rebuild of the engine followed by the resto of the car.

Hi 2SLO4U,
Thanks for the information.
Don't suppose anyone's got a copy of the feature in Mopar Collectors Guide we could (all) look at ?
Mike
Beep ! Beep !
Top
Post Reply
8 posts • Page 1 of 1