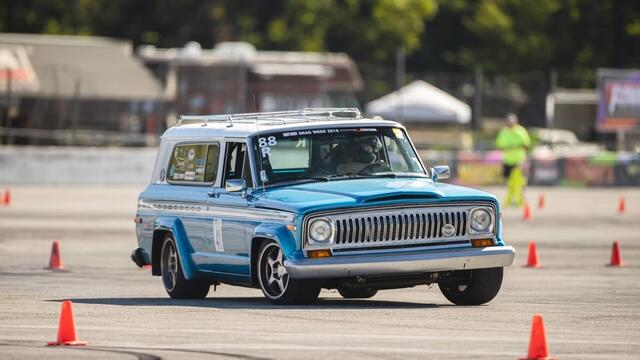 This Hemi-Powered 880-HP Jeep Cherokee Is The Coolest Wagon Sleeper
The Cherokee hit 140 mph in a quarter-mile in around 9.9 seconds.
https://www.hotcars.com/this-hemi-power ... n-sleeper/


For roughly three-quarters of a century, the venerable Jeep has served its owners, not to mention allies during wartime, with distinction. So to stalwarts of the rugged truck, the idea of modifying it with components other than what the original came with might seem sacrilegious. But not to one owner in Kentucky, who swapped out his Jeep's engine in favor of a V8.

"This started as a '75 Jeep Cherokee," said owner Greg Huizenga."I bought the body shell and we put this together. Basically, it's a Jeep costume on a race car that we daily drive, so what's underneath it, then, the chassis is kind of loosely based on a '67 to '72 Chevy C10."

As far as the guts are concerned, though, Huizenga put in a first-generation 5.7-liter dual valve pushrod V8 motor, which was designed to kick out 350 horsepower when revved at 5,600 rpm and 375 pound-feet of torque at 4,400 rpm. For those wanting to do the simple math on engine size, that's roughly a unit of horsepower for ever cubic inch.

With 880 Horsepower, This Jeep Was Made For Drag Racing

But Huizenga wasn't finished. He also added a bit more boost by installing the nautilus-shaped Borg Warner S480 turbocharger. After a few tweaks here and there, he managed to get the Cherokee gunning at 880 horsepower.

Adding slicks on the Jeep and Huizenga had a vehicle that was not only street legal but could be a regular predator on the drag strip too. One quarter-mile event that the Cherokee entered saw the truck hit roughly 140 miles per hour with a timed result in the neighborhood of 9.9 seconds.

This Jeep likely came with a standard straight-six engine back in the day, although more recent Cherokees have been equipped with latter-generation 5.7-liter V8s. We can also expect more changes affecting Cherokees before it retires for good. But for Huizenga, rebuilding his old Cherokee was a blast. "It's just got to be fun enough for everything," he said.

How could anyone -not- dig this race truck? Talk about a major sleeper!