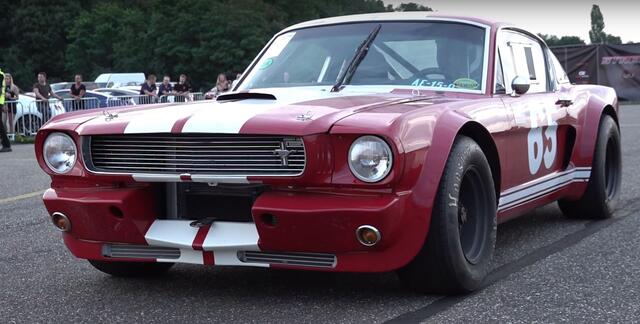 
We're aware of a problem in the Mustang restomod community. Many builders say the LS fits better under the hood than a Ford engine. You can use a Coyote, but it requires a lot of changes to the chassis.

We perfectly understand. Every early Mustang in mint condition isn't worth cutting up. In addition, the LS is synonymous with engine swaps, like Kleenex is with tissues. However, this particular pony chose to take a completely different route and is currently committing sacrilege with its Hemi powerplant.

There's not a lot of info on this car. It popped up in the European drag racing scene a few months ago. This latest video shows it arriving at the drag race airstrip and gives us a few glimpses under the hood.

The engine in question is obviously a modern-day Hemi 6.1-liter, the same one offered in a bunch of Chrysler or Dodge vehicles. The 370 is also slightly old, featured in things like the 2008 Challenger or the 2006 Chrysler 300C SRT8 with most applications featuring 425 horsepower in those situations.

Also interesting is the placement, well behind the front wheels for what's technically a mid-engined layout. In front of that, we have what looks like a supercharger, a giant intercooler, and a radiator. The trunk is stuffed with electronics, management systems, and a racing fuel tank.

At first glance, this is a relatively unassuming body. But the GT350 boasts flared out fenders and a custom bumper with an integrated central intake. We don't know how fast it is, but the custom 'Stang seems to be keeping up with everything and everybody.

The interior can also be seen for a few moments, and as expected, the Hemi creates a massive intrusion into the transmission tunnel. Reach over the full roll cage and you see a modern Mustang wheel, eclectic gages, and a gated shifter with an aircraft joystick on top.

Do you think Carroll Shelby is rolling over in his grave?