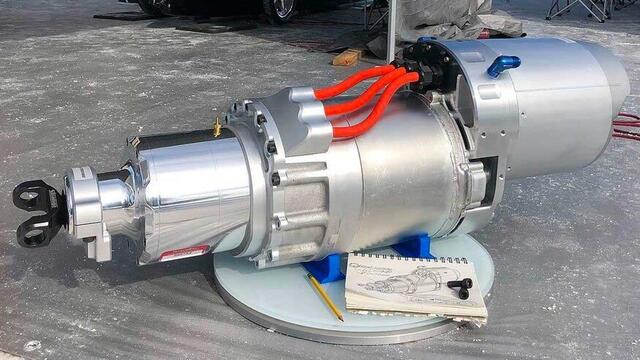 
Forget that LS swap and go for a Tesla drive unit that bolts up to a small-block V-8's mounts!

The term "crate engine" has long been used to describe engines you could buy (typically hotted-up or modified) and install in the car or project of your choosing. Why the name, though? Because the engines ship in crates. Often, the word "engine" is used interchangeably with the word "motor," a casual oversight of the distinction between an internal-combustion engine and a motor, which we typically use to describe an electric power source. Until now. Go ahead and call EV West's Revolt Systems Tesla electric powertrain swap what it is: A crate motor.

Literally, that's what this wonderful creation is. A crated electric motor. Even better, it's a bolt-in setup gunning to replace one of the most common crate engine choices out there, GM's small-block V-8. That is because the EV West Tesla powertrain bolts up to small-block V-8 engine mounts and can be hooked up directly to a driveshaft, so you can fit it into your small-block V-8 project and keep your rear axle as-is.

The so-called Revolt Tesla Crate Motor appears to come with the electric motor from a Tesla, an inline gear reduction where a traditional transmission would bolt up behind an engine, and a universal joint waiting to be fixed to a driveshaft. As with EV West's other available motor kits and such (the outfit offers EV conversions for a variety of classic cars), the battery and control unit for the setup appears to be sold separately, and all of the components will be available individually.

Previewed in a Facebook post by EV West, which also included photos taken at the Bonneville Salt Flats, the new kit is really a combined effort by EV West and Revolt Systems, a new company being started to provide the necessary conversions of Tesla powertrains to this new longitudinal layout. According to EV West, which will sell the Tesla crate motors, the original Tesla Model S drive units have to be stripped down, the differential casting cut free, and the motors smoothed up and bolted to a new aluminum gear reduction.

The crate motor produces a claimed 450 kW, or 550 hp. On Revolt's website, it notes the forthcoming Tesla drive kit includes "a highly modified 400-kW Tesla Model S motor producing approximately 533 hp with over 800 [lb-ft] of torque at the yolk." So, either way, expect prodigious output from the motor.

A separate conversion kit offered by EV West includes what sounds like the same 400-kW Tesla Model S motor along with a different (more stock-appearing) gearing setup; it runs $11,900. The small-block-ready version has a custom gear setup (that longitudinal arrangement pictured here, which is distinct from the off-the-shelf transverse layout used by Tesla). In any event, consider this a cool addition to the crate-motor world—a plug-in Tesla powertrain that can fit virtually anywhere a small-block can. That leaves finding room for a battery as the main challenge for would-be EV crate motor converts.

I wonder how my S10 would respond if it had a 550-hp electric motor?

Re: Scrap the Small Block V8 for a Tesla Crate Motor

While the motor is only $12K, I'm told $50K+ when all necessary parts are included.
You can rest assured my S10 is NOT going to get this Tesla motor conversion.

Unless Elon Musk wants to sponsor me for some advertising...