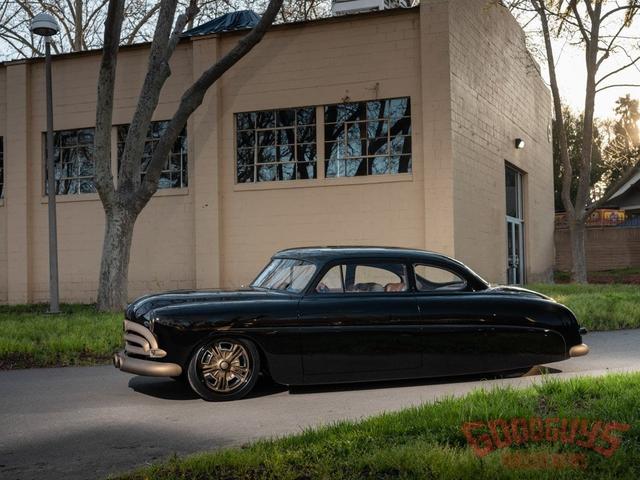 
One of the more unusual customs we’ve seen in a while is Mike Dennison’s 1951 Hudson built by Kenny’s Rod Shop in Boise, Idaho. When was the last time you even saw a Hudson, let alone one done to this caliber? Throw in a custom tube frame and Viper V10 and you have a winner.

Kenny’s Rod Shop started from scratch on this one, making a frame from square tubing and enough tubular bracing to make a racecar shop happy. New floors and wheel tubs were crafted to get a proper stance while retaining full drivability. An Art Morrison front suspension was equipped with Fox Racing coil-overs, while the 9-inch Ford rear was hung on a custom four-link with air ride. Wilwood brakes keep the V10 in check.

That Viper V10 is an 8.3-liter version (or 506c.i. for those not versed in the metric system) with a custom Hogan intake and custom headers. KRC crafted new inner fenders and a radiator cover to neatly house it. A six-speed manual transmission backs it up.

Under-hood fabrication also included a new inner structure and hinges, while the skin was given a nose massage and a reconstructed hood-to-cowl line. The KRS team also reshaped the headlight area, grille, and the narrowed and tucked bumper. Driving lights and redesigned head and signal lights provide a more modern feel.

The top is un-chopped, but the doors and rockers have been extended to follow the line off the front fender. Flush-mounted skirts conceal the rear Schott wheels. All chrome has been eliminated, blacked out, or painted bronze, with a gold stripe along the body line accenting flawless black paint applied by Shawn McNally of Regenerated Rides.

The modernization spills into the cabin with a redesigned dash and centered gauge cluster housing Classic Instruments dials. Interior Revolution trimmed the seats and cabin in a mix of brown and basket-weave Alcantara leather. A Lokar shifter is neatly mounted in a leather-wrapped console in front of the media screen in the dash.

Prior to the debut of the Chevrolet small block, Hudson had a winning performance reputation in 1950s motorsports. This sleek black 1951 Hudson Wasp takes those cues to the next level – it’s a fully functional, high-performance custom that goes as good as it looks.

Check out the quality of the interior and engine bay. This is an incredible clean build.