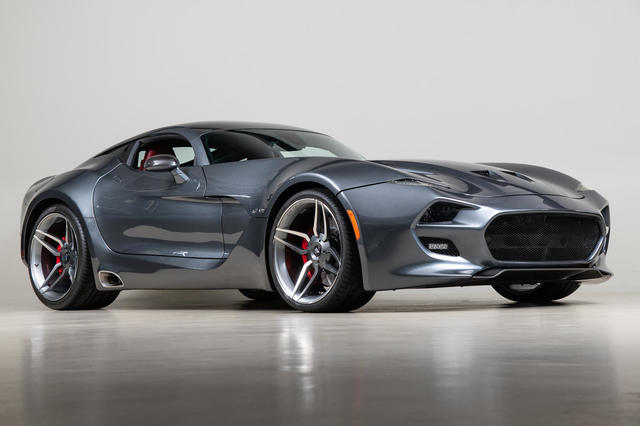 
50 units were planned. Supposedly only five were built.

It's been a few years since we reported on anything VLF Automotive related. Founded by Gilbert Villarreal, Bob Lutz, and Henrik Fisker, VLF Automotive does not build any new vehicles from the ground up but rather reskins cars and swaps out powertrains. Take the VLF Destino, for example. This four-door sedan looks awfully like an original Fisker Karma. That's because it is. But instead of its hybrid powertrain, it packs GM's LS9 6.2-liter V8 with 638 horsepower and 604 lb-ft of torque. The C6 Corvette ZR1 also made use of this engine.

Another of VLF's vehicles is the Force 1. Does it look at all familiar to you? It should because it's really a Dodge Viper. First revealed at the 2016 Detroit Auto Show, power comes from the same 8.4-liter V10 found in the fifth generation Viper.

Henrik Fisker, who is about to launch an all-new EV SUV called the Fisker Ocean, redesigned the exterior body panels and created a more luxurious interior featuring bits of milled aluminum, a suede sunglasses holder, and even a hidden aluminum pen holder. There's even a champagne holder. A production run of just 50 units was planned but only five were built. And now one of them is up for sale on car sales website Canepa. Not only does this example have just 1,078 miles on its clock, it was originally spec'd and built for Henrik Fisker himself.

Fisker reportedly always wanted to build an all-American supercar and Lutz gave him the opportunity. But simply restyling the Viper inside and out wasn't enough for the famed designer. He reached out to American race car driver and Viper enthusiast Ben Keating for upgrade advice. The result was a power boost to 745 hp and 638 lb-ft.

The six-speed manual transmission remained, though the suspension was upgraded and made adaptable for either street or racing purposes. Brembo was brought in to provide powerful brakes. Fisker's signature design style can be found throughout the Force 1, such as the angular front vents and squinted headlights. The car in question was originally supposed to be Fisker's personal ride, and it's been painted a dark grey metallic with a red and black interior. It's also equipped with an upgraded exhaust system.

Even with these upgrades inside and out, slicing weight remained a priority. The finished product weighs less than 3,400 pounds. The price? Unlisted, but anyone interested should be prepared to pay handsomely. This is one of the rarest street supercars in the world.

The Viper doesn't need any help in the design department, but this does look great.