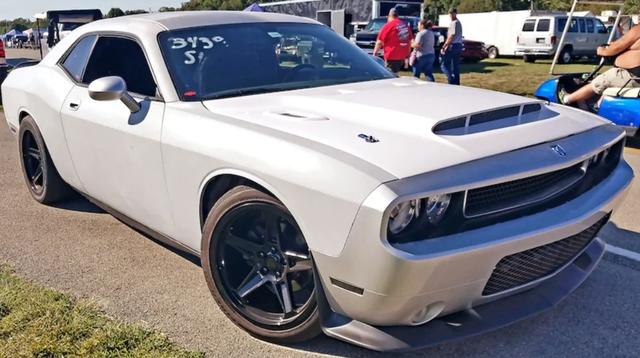 
Alberto Ramos is a "just do it" kind of guy. Take one look at his LS-swapped, turbocharged 2009 Dodge Challenger, and you'll wonder if he ever took the time to think about it twice—it's that improbable. Why would you build a Dodge Demon replica using a Chevy LS? Well, because it'll run you about 10 percent of the cost of a real one, for one thing. Completely aside from the fact that it's sacrilege to do such a thing, there's got to be at least a hundred technical and aesthetic reasons why it shouldn't happen. Ramos doesn't care.

As the owner and operator of Superior Mufflers in Orlando, FL, Ramos has a good handle on the mechanicals, as well as prior experience swapping Dodge powerplants over to Chevys. His previous Mopar, a 1979 Dodge Colt, was a player twenty years ago. "I used to do a lot of local street racing, nothing crazy, you know, just keeping cool," says Ramos. "I put a Chevrolet 4.3L turbocharged, carbureted engine in the car. I got to the point where I was the fastest guy on the street, and one of the very few guys with a turbocharged, carbureted Chevy-powered Dodge Colt. I drove it wherever I wanted, pretty much. We never took it to the track, never took it to the dyno, I was just playing in the street. I got to the point where I beat the fastest car, and after that nobody wanted to race me, so I started racing at the track. I started going to Orlando Speed World, and I won an event with the car. And literally, that just took me off the street."

At the heart of Alberto's 2009 Dodge Challenger SE (originally a V6 salvage-title car) sits a 0.030-inch over 6.0 LS with 408 cubes, a set of Patriot LS3 heads, and a 69mm Borg-Warner turbo. The combination is far simpler than a Hellcat's 6.2L Hemi, and features a blow-through CSU carburetor with an Extreme Velocity hat by SuperiorAirflow.com. The CSU carb's unique shear tube discharge has proven to work well, particularly in blow-through turbo set-ups like Alberto's. A mild 0.590-inch lift custom cam was designed for the Challenger's heavy curb weight, and paired specifically to the converter in the built Turbo 400 trans.

Though boost remains modest at this point due to the small turbo, the Eagle forged rotating assembly will be good for much more boost with a bigger turbo later on, and ought to pair well with the Turbo 400's trans brake that's in the car already, but untested so far. Alberto guesses the output at just over 800 hp, a fact he deduced by a little, uhh, trial-and-error testing. "The car runs in the low, low 10s, and we're still tuning. I beat a Hellcat Redeye, right off the truck. With street tires."

It may come as a surprise to some, but this 6.0 is Alberto's first LS build. "I started out originally with a 6.0 junkyard motor, says Ramos. "It's my first LS build. I did it all myself. I got on YouTube, you know, hours and hours of just self-learning. All the machining was done by my friends over at CW Pence Machining, but I put the engine together myself."

It's still a work in progress, as Alberto is still addressing cosmetics. A set of knock-off 20-inch Demon-look wheels, a fiberglass Demon-look hood, and a Demon spoiler currently complements the future paintjob that Ramos' brother—a bodyman by trade—plans to lay down. When finished, Alberto will have less than $20k into his Hellcat-killing, Chevy-powered Dodge. As those heart-breaking losses mount for Hellcat owners, the wins will be even more satisfying for Alberto, knowing that he built his Hellcat killer on his own for a fraction of the price!

This is ... an interesting build. I'm a fan of the Challenger and LS, just not together.