Porsche says carbon brakes not best for track use

Porsche says carbon brakes not best for track use 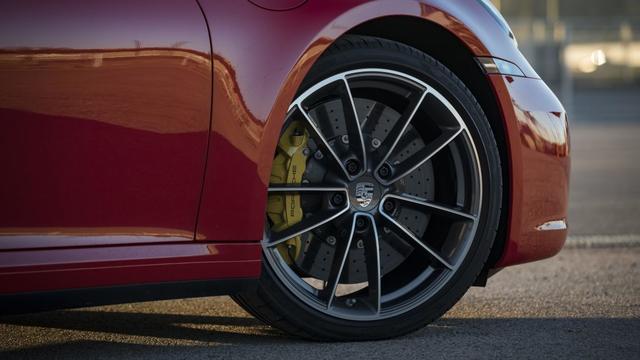 Porsche tech rep says carbon brakes are not the best for track use
PCCB system best for 'people who don't like cleaning their wheels
https://www.autoblog.com/2019/03/24/por ... ce-tracks/


During the 2020 992-series Porsche 911 launch in Australia, Wheels magazine spoke to Paul Watson, Porsche Australia's in-country technical representative. When the conversation turned to carbon ceramic brakes, Watson surprised his questioners with the statement that "if you're doing club days we'd always recommend iron discs." This is an unexpected take considering how carbon ceramic rotors have been promoted as an open-secret weapon for track days.

Watson explained that "ceramic discs can degrade if you're hard on the brakes" and that "heat build-up will degrade the carbon fibers in the disc." Rotor wear comes no matter the rotor material, though.

The context of Watson's statement comes when he says, "When we first launched the discs we told people they'd last virtually for the life of the car and people were doing a number of trackdays and coming back to us saying 'I've worn them out.'" The issue isn't about the pure performance value of carbon brakes, but the cost-vs-performance value compared to iron rotors.

Brembo used to promote its SGL carbon ceramics as lasting 100,000 miles. The company has changed the wording on the page to say they have "a four times longer lifetime and an obviously less brake pad wear" than cast iron discs. Your mileage would certainly vary.

A little time on any Porsche forum bears out Watson's anecdote. Forum threads going back at least five years debate whether the Porsche Carbon Ceramic Brakes (PCCB) justify their new and replacement costs. Porsche asks $8,520 to put PCCB on the 992-series 911, and $9,210 to option them on the 911 GT3. A set of replacement rotors for the front axle costs $11,500. Aftermarket carbon brake kits made just for Porsche, and that can be refurbished, cost $14,949 in one instance, $21,895 in another, or $29,000 from Brembo. And they require specific, expensive pads.

For the hardcore trackie, that's a lot of cast iron rotors. The Brembo steel brake kit, for instance, is one-third the price of the Brembo carbons; an AP Racing kit is one-fourth the price. Which is why some people recommend buying a set of Brembo steel discs and storing the PCCBs until an owner resells the car, and why YouTube is full of videos of Porsche owners swapping out the carbon ceramics. On that note, carbon brakes are notoriously fragile. If the home mechanic chips the rotors, there's another mongo money repair.

Carbon brake kits are lighter, look cooler, and should last a lot longer than cast iron discs on the road. They also don't create any brake dust - a good thing for J.D. Power survey respondents and the fishes. A Washington State University paper said minute amounts of copper from brake dust is killing salmon in the Pacific Northwest, as did another study from the Ecological Society of America.

So when Wheels asked Watson who carbon ceramic brakes are for, he replied, "People who don't like cleaning their wheels. They don't leave a build-up of brake dust, so that's an advantage."

The good news? A problem I won't be worrying about anytime in the near future.