GMC Typhoon Rendering Is The 500-HP Chevy Blazer We Want

GMC Typhoon Rendering Is The 500-HP Chevy Blazer We Want 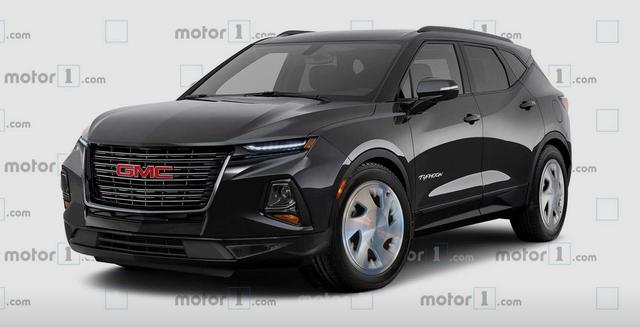 
GM needs to build this.

Once upon a time when fast cars were literally just cars, General Motors did something completely unexpected. Under the hood of its plebian 1991 GMC Sonoma compact pickup truck, engineers fitted a 4.3-liter V6 engine with a turbocharger that produced 280 horsepower (209 kilowatts). Those same engineers also gave it a full-time all-wheel-drive system to create the legendary GMC Syclone, and then in 1992, they did the same thing to the poor S15 Jimmy. It was called the GMC Typhoon, and for two glorious years it burned the souls of unsuspecting drivers in Mustangs, Camaros, Corvettes, and yes, even six-figure Italian supercars of the day.

Flash forward 26 years. Jeep builds a 707-hp (527 kW) Grand Cherokee, Ford has an Explorer with 400 hp (298 kW), and the GM family has, well, nothing. The Chevrolet Tahoe RST is pretty neat with a 420-hp (313 kW) 6.2-liter V8, but it’s also pretty big – like really big. What the General needs is a new Typhoon, and with the Blazer moniker reborn as a sporty crossover, there isn’t a better time to reveal our take on such a revival.

It wouldn’t be hard to do. The original 1992 GMC Typhoon had a tweaked suspension and a body kit to give it a sporty appearance, but the new Blazer already looks properly muscular in stock trim. In this case, a simple monochromatic exterior treatment injects plenty of attitude, though some suspension changes for a bit more cornering bite and a bit less wheel gap are needed. We’d love to see a modern take on the original Typhoon wheels as well – no black rims or ridiculously overstyled bazillion-spoke creations, just a smooth, directional, aluminum wheel.

On the performance side, an all-wheel-drive system is already available but power needs to go way up. That 420-hp V8 from the much larger Tahoe RST would be a good start, but in 1992 the Typhoon was a bonkers bullet that shocked the motoring world. Admittedly it's hard to shock the performance establishment these days, but if the new Typhoon were to get a version of Cadillac's compact, twin-turbo Blackwing V8 tuned to around 500 hp (373 kW), that would certainly turn a few heads.

Even with the current insatiable appetite for SUVs in America, we sadly don’t see this new Typhoon happening. That is, at least from the factory. A company called Specialty Vehicle Engineering (formerly SLP for you GM gearheads) already offers a modern GMC Syclone based on the GMC Canyon, producing 455 hp (339 kW) from a supercharged version of its stock 3.6-liter V6.

Perhaps a new Blazer will find its way into the shop for some retro-themed upgrades. In the meantime, we can always dream.

As a SyTy fan, I think this would be awesome. GMC, give SVE a Blazer platform to build from!