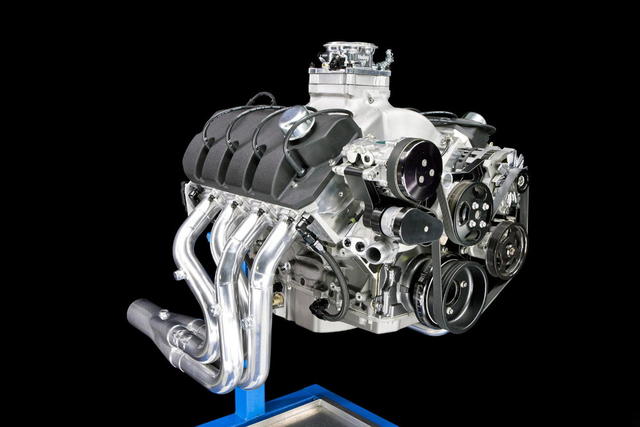 
That’s the outrage we’d expect from the Mopar faithful or perhaps even the Ford hemi guys. After all, their righteous indignation is aimed directly at a set of hemi heads sitting astride an LS short-block.

Allow that to stew in its own juices for a moment or two. Then ignore the automotive theologians and focus instead on the fact that hot rodding has always ridden on the knife’s edge of automotive heresy. It wasn’t all that long ago that hot rodders were reviled hooligans.

Still, the two terms “hemi” and “LS” would seem to be mutually exclusive, except to Greg Brown. To him, the two were destined to partner up to create the unlikeliest of performance engines. Brown’s initial foray into the world of hemi heads began when he saw the need—long before perhaps there was a need—for a set of hemi heads on a small-block Ford. Emerging from a rather large pile of aluminum shavings, he presented the world a set of Hammerhead hemi castings banging valves up and down on a 351W and later a 427 Ford. That alone was cause for celebration, but Brown was already looking ahead.

Being the creative guy that he is, it occurred to him one day that there was but a mere 0.020-inch difference in the bore spacing between a small-block Ford (4.380-inch) and GM’s LS engine (4.40-inch). This simple observation led him to drill a 10-bolt LS head pattern into a pair of castings and with a few other changes he had what he needed to bolt a set of Hammerheads on an LS engine. Aligning his ducks beak-to-tail wasn’t nearly as easy as that oversimplified description, but a good idea whose time has come is a force that cannot be ignored.

Brown has spent the past 18 months dealing with all the pesky minutiae required to make the valves go up and down without issues. He introduced his premiere hemi LS at the 2017 PRI show and HOT ROD was immediately intrigued. We put the pressure on him by recording the event as the LS hemi churned up the dyno for its maiden effort. But before we get to the sexy power numbers, let’s do the equivalent of automotive cave diving into those massive aluminum ports that started all this craziness.

Brown’s initial effort was aimed at building a set of hemi heads that would bolt directly to a small-block Ford. While the valve arrangement and the massive valve covers certainly exude hemi, looking at the chamber might lead you to think this is nothing more than a wedge chamber with big valves. According to Brown, that’s exactly what it is. “It’s really just a rotated wedge chamber.” But a near-centralized spark plug and wide canted valves pointed in make it look like a hemi. ‘Nuff said.

The main advantage of this valve arrangement is that the valves open toward the center of the cylinder bore as opposed to wedge heads with inline valves that open toward the cylinder wall. The difference is all about flow. With a 2.20-inch intake valve, this head with Brown’s street-friendly 45-degree valve job will push the needle to 379 cfm on the intake side and 263 cfm on the exhaust side, both at 0.700 lift. And those are not the peak numbers; the intake can over-achieve beyond 400 cfm at 0.800-inch lift.

Brown says that he has several customers focused on turbo-boosting these castings. With porting and a larger valve, Brown has already achieved 470 cfm on the intake side. The combination of massive airflow with boost should be impressive.

Of course, these expansive heads also require their own specific valvetrain. For this, Brown sought out Jesel’s assistance and all Hammerheads come with Jesel Professional series shaft rockers. For this LS engine, Brown fitted the heads with Comp beehive springs for the hydraulic roller cam.

The Hammerhead intake port layout was originally designed to allow Ford Windsor intakes to bolt right on. We’ll get to how Brown solved that for the LS a little later. The exhaust ports were a bit more of a challenge with Brown settling on the Ford/Yates C3 layout. This allows an engine builder to at least buy the exhaust flanges to facilitate custom headers.

To begin this hemi LS odyssey, Brown’s initial customer, Ricky Tucker, wanted this unique combination stuffed into a Pro Touring ’69 Camaro. Brown started with a production LS3 block at a 4.165-inch bore and honed the cylinders another 0.005-inch and pumped the displacement with a 4.00-inch Lunati steel forged crank along with 6.125-inch Lunati H-beam rods.

An effort like this does require some help from solid sources like the guys at Diamond who had already helped Brown with hemi pistons for his initial Ford effort. The pistons are really just a set of LS strokers with a crown configured to accommodate the hemi valve layout and larger 2.200-inch intake valves. Brown told us that bore spacing is measured from the center outwards. So the outboard valves would be skewed slightly inboard compared to a stock valve position on an LS engine.

For piston-to-valve clearance, Brown came up with a simple solution. While a standard valve relief pattern would supply a 0.050-inch radial clearance (given the 2.200-inch valve size) between the valve edge and the piston, that would become tighter with the outboard cylinders due to the hemi heads’ shorter bore spacing. So Brown had Diamond machine the valve pockets for a 2.250-inch valve diameter, creating the additional radial clearance.

Brown says that while these Diamond pistons were custom machined and therefore expensive, he’s working with a couple of piston companies to come up with production parts that would be more affordably priced. For sealing, Brown went with a set of 1.5/1.5/3.0mm Total Seal ductile-iron top and Napier second ring set with a standard tension oil ring set.

The next big hurdle was a bit more challenging. Brown’s Hammerhead castings reverse the normal LS valve layout, meaning that while an LS engine orients the valves starting with the intake while the hemi heads lead with an exhaust valve. This demands a re-oriented camshaft that reverses the intake and exhaust lobes. At the time, Brown had Comp Cams employ a billet LS cam core to create his camshaft. This clearly isn’t an off-the-shelf cam even though the specs are still very mild at 238/246 degrees at 0.050 with 0.595-inch lift on both the intake and exhaust ground on a 112-degre lobe separation angle (LSA).

Interestingly, Brown later discovered almost by accident that the new Gen V LT1 and LT4 engines switched the valve orientation and now place the exhaust valve at the front of the chamber instead of the intake. He immediately recognized that he could use a Gen V cam blank for future LS hemi builds, saving considerable expense over a billet core. The Gen V engines use a single-bolt cam drive, but other than that, it is an easy retro-fit to any LS engine. Sometimes the world just delivers an unexpected present right to your shop door. Greg Brown must live right.

But the challenges of building an LS hemi were far from resolved. The stock LS engine deck height is 9.240 inches while the Hammerheads were originally designed for either a short-deck Windsor at 8.206 or the taller 351W deck of 9.48. Since Brown had designed his original Hammerheads to accommodate either of the Ford intake manifolds, the LS presented a significant design impediment.

His solution for this first LS hemi effort focused on a NASCAR restrictor-plate version of the SB2 intake. “That wasn’t my first choice, but the customer required that the engine fit under the flat, stock hood of a ’69 Camaro. That made it tough.” The restrictor plate version SB2 was a solid two inches shorter and provided the real estate to fit it with a Holley 1,000 cfm throttle body. But that doesn’t mean this intake bolted right up.

When asked how much time he had invested in this intake, Brown just sighed and admitted he easily had over 40 hours in this casting just to make it fit. To start, he sawed it right down the middle, adding a pair of 5/8-inch thick plates. Plus, the customer wanted the engine to look carbureted, so the short, Deatschwerks 50-lb/hr injectors were placed on the inboard side of the intake runners. With the final welding of the now two-piece intake complete, it’s difficult to fully appreciate the effort that went into its creation.

Brown says he’s initiated a plan with Tyler Hogan at Hogan’s Racing Manifolds to build a sheetmetal base for the LS hemi engines that would accommodate the multiple top half Holley castings that would allow both a single or dual four-barrel mount or a front-mounted EFI-style throttle body which will also make this a much more affordable induction. Brown said that if he had been able to use the taller manifold, the engine would have gained significant torque, but packaging constraints dictated the shorter version. All that means is there is plenty of power still available, given fewer tuning restraints.

With the engine assembled, Brown delivered the engine to Pro Motor Engines in Mooresville, North Carolina where Dennis Borem and company bolted the hemi on the dyno while Holley’s Robin Lawrence lent his considerable tuning skills to the Holley HP EFI system. In a short period of time the wide-body LS churned out a peak torque of 545 lb-ft at 5,500 rpm and 636 hp at a very manageable 6,500. This is a 10.5:1 compression pump-gas engine that would run all day at these elevated numbers. Despite the large, single-plane intake and big-tube headers, this 416 was still capable of over 400 lb-ft even at 2,800 rpm.

Even with all this innovation, Hammerhead prices a pair of these castings for a hydraulic roller cam at only $5,995. There’s far more to a complete engine of course, but not as pricey as first appears. So there you have it, LS irreverence on a grand scale that will soon find its way under the hood of a Detroit Speed-built ’69 Camaro. We can only imagine the questions that will crowd around the engine compartment every time Tucker pops the hood.

I have to admit, I cannot find any major fault with this idea.

A few years back, HotRod bought a boneyard LS and set it up for forced induction. Apparently the reciprocating assembly was bone stock and they put 26 pounds boost to it. The result was sixty dyno runs at over a thousand horsepower. The part that I thought was most interesting is that HotRod believed that they were thrashing a 5.3L. No, it was the entry level 4.8L.

A guy in Australia designed and built a 90% British Spitfire fighter plane. After experimenting with several different makes and models of engine to power the plane, it was decided that the LS2 would be the power source. You can be pretty sure that only serious, sober thought and extreme test results finalized that.

I figured that it was only a matter of time before someone "backyards" the LS and introduces it to the hemispherical combustion chamber. It will definitely be a force to reckon with, running gasoline as a fuel. What it might or might not do on nitro remains to be seen.
Top
Post Reply
2 posts • Page 1 of 1