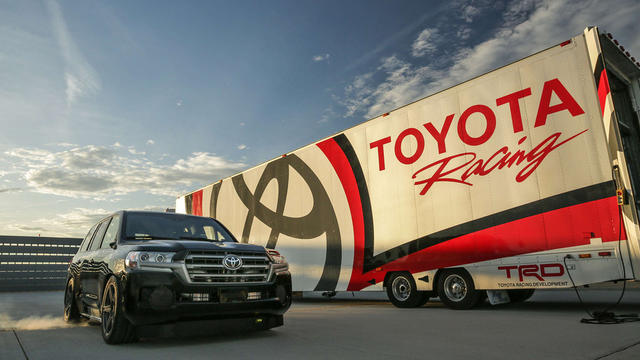 
By the hammer of Thor, that's fast. Toyota's heavily-modified Land Cruiser known as the Land Speed Cruiser has blasted its way into the record books through the sheer force of its 2,000 horsepower engine, setting a new SUV world speed record of 230.02 miles per hour. Which, in case you were wondering, is 88 mph faster than the regular Land Cruiser's maximum velocity.

The Land Speed Cruiser, which debuted at the 2016 SEMA show in Las Vegas, was in the capable hands of ex-NASCAR wheelman Carl Edwards for the record run of 230.02 mph, which took place at the Mojave Air and Space Port's 2.5-mile paved runway. But Edwards wasn't alone; test driver Craig Stanton helped dial in the 2,000-hp SUV before the high-speed blast.

“We made some setup adjustments, and it not only accelerates and shifts more smoothly, but it also has enhanced stability,” Stanton said in a statement released by Toyota.

“At 225 mph, the thing was wandering a little bit," Edwards said in the same statement. "All I could think was that Craig said, ‘No matter what, just keep your foot in it,’ and we got 230 mph.”

That speed—19 mph faster than the previous record-holder, according to Toyota—was possible thanks to an array of hardware modifications up and down the vehicle. The Land Speed Cruiser's frame was narrowed and tweaked to improve suspension geometry and to make room for Michelin Pilot Super Sport rubber on the wheels. The SUV was also lowered, to help cut down on wind resistance.

But ultimately, the most important factor behind hitting 230 mph was the engine. Starting with the 5.7-liter V-8 found in every new Land Cruiser, Toyota's Motorsports Technical Center engineers strapped on a pair of ginormous (i.e. volleyball-sized) Garrett turbochargers capable of pushing up to 55 psi of boost; added new pistons, rods, and a bunch of other internal bits; and ran it all through a racing transmission capable of handling the ludicrous output. Boom—a 230 mph Land Cruiser.