Will the Dodge Demon spark a horsepower war?

Humor, interesting links, and/or whatever else.
Post Reply
4 posts • Page 1 of 1

Will the Dodge Demon spark a horsepower war? 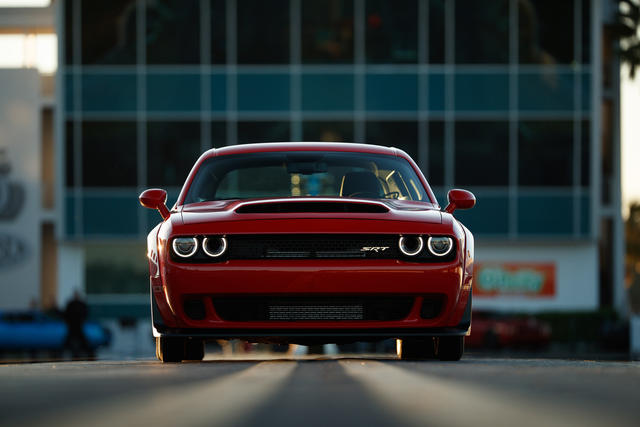 Will the Dodge Demon spark a horsepower war?
https://www.hagerty.com/articles-videos ... power-wars

I’m not excited for the 2018 Dodge Challenger SRT Demon because I’m buying one or think I’ll ever drive one. I’m excited because of what the new Demon’s 840 hp represents. I was born in 1980, well after the Big Three’s (or was it four with AMC?) horsepower and drag race wars raged in the ‘60s. Boy, do I wish I could have seen them spar. Maybe I’m being selfish? But if Ford or General Motors take the bait, the Demon means renewed, OEM-supported, drag racing hostilities.

In 1963, Chevrolet built a drag racing version of its Impala, labeled the Z-11. It had a 409-cid V-8 stroked out to 427-cid. GM made only 50 of these Z-11 cars, which were underrated at 430 hp. The same year, GM also produced the Pontiac Catalina Super Duty. Dubbed a “Swiss Cheese” car, because Pontiac drilled the special Catalinas’ frames, along with other weight-saving measures, to lighten them. Pontiac had a different take on the power plant too, equipping it with a custom version of its 421-cid V-8 with dual quads resting on the intake. Only 14 Catalinas were ordered with “Swiss Cheese.”

Then Ford joined the battle. It introduced exactly 100 Fairlane Thunderbolts in 1964. The Thunderbolt was intended for drag racing only, and stuffed with a 427-cid V-8 that sported dual Holley four-barrel carburetors atop a high-rise intake. They were conservatively estimated at 425 hp. Following Pontiac’s example, Ford shaved weight also by fitting aluminum bumpers, fiberglass body panels, and removing the rear seat. And it was bold enough to remove the high beams in favor of air intakes.

Dodge answered in ‘65 with its Coronet A990. After NASCAR banned them, Dodge took the 426-cid Hemi to the drag strip. Only 101 of these cars were built, sporting a bare-bones bucket seat out of a Dodge van.

Late to the party, AMC created the Super Stock AMX in 1969. Like Ford’s Thunderbolt, it was powered by a V-8 with twin Holley carbs, but displaced 390 cubic inches. AMC rated the engine at 340 hp, but the NHRA decided it was more like 420 hp.

It must have been a glorious time.

A couple of weeks ago, Dodge released the Demon, which weighs about 5.1 lbs per horsepower. Compare that to the Swiss Cheese Catalina’s approximate 8.4 lbs per horsepower. And while the current Ford Mustang Shelby GT350R and Chevy Camaro ZL1 are exciting cars, they weigh 7.1 and 6.1 lbs per horsepower, respectively, and can hardly be considered dragsters. They’re optimized for road circuits like Monterey’s (Calif.) Laguna Seca.

Ultimately, I’m hoping that Ford and Chevrolet respond to Dodge’s Demon—not via some factory car modified by Hennessey (like their 1000 hp Camaro Exorcist), for example—but with their own in-house dragsters. I want another drag war, another horsepower war. Someday, hopefully, car enthusiasts will look back at 2018 and remember that factory drag racing was reborn that year. Do you think Chevy and Ford will bite?

While I love this discussion, I'm not sure where we can go from here? Seriously.
We're now getting 800-hp street cars. Do we reach 1000-hp next? That's nuts.

Although, I also thought 400-hp in the '92 Dodge Viper was pretty far out there...
Scott Moseman
http://www.TheHEMI.com/
Follow us:

The HEMI will be gone next year,so does it really matter?
Top

The Hemi will be gone next year leaving only Geriactric Motors,so does it really matter?
Horse power war with Bugatti?
Top

DHEMI wrote:The HEMI will be gone next year,so does it really matter?

I believe that rumor is around the 5.7L HEMI, not every HEMI.
Maybe with our new POTUS we can have CAFE numbers eased.
Scott Moseman
http://www.TheHEMI.com/
Follow us: