Viper-Powered BMW Z4 Is The Stuff Of Nightmares

Viper-Powered BMW Z4 Is The Stuff Of Nightmares 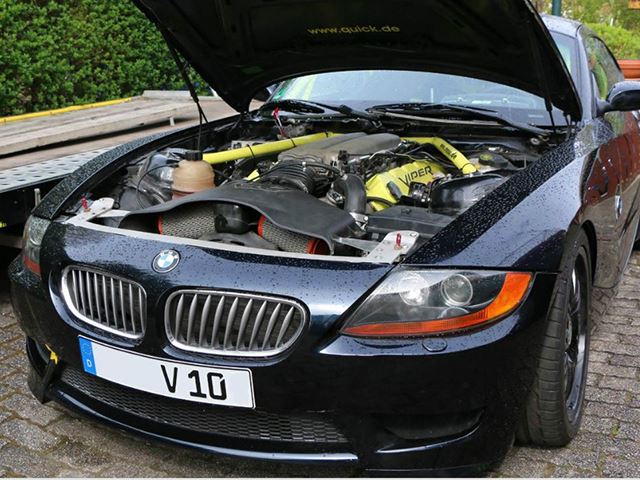 We’re convinced the BMW Z4M Coupe is a future collectible. Powered by the same S54 inline-six as the E46 M3, the engine put out 330 horsepower, which is plenty, but clearly not enough for this owner. This Z4 Coupe wasn’t an M, but the German straight-six was still replaced by an 8.3-liter V10 from a Dodge Viper. This gigantic engine puts out 550 hp to a six-speed manual. The owner says that the build was meant to be reliable and safe, but notes that performance is “brutal.” The car is currently listed for sale on eBay.

So what’s the price for this German-American hybrid? Currently around $55,000. Although, the car is currently located in Saarbrucken, Germany. We aren’t sure how it would work to import a car like this, but chances are it wouldn’t be easy. From the outside, this Z4 almost looks stock thanks to black OEM wheels, but on the inside it’s clear that this machine means business. The whole interior is filled with a neon green roll cage, which is an excellent contrast to the all-black exterior. Most of the BMW interior trim seems to be stripped out, so we wouldn’t recommend using it as a daily driver. Under the hood, the Viper V10 looks massive sitting in the tiny German coupe.

As far as engine swaps go, this is definitely one of the best that we have seen. Usually, when you think of an engine swap, chances are it’s a Chevy V8. It is a very cool change of pace to see someone use a Viper V10 in something as unique as a Z4 Coupe.

I'm shocked they could shoehorn a V10 into the Z4 -- but I'm sure glad someone did!