Love it or Hate it, this 'Bagged Hellcat Runs 9s

Love it or Hate it, this 'Bagged Hellcat Runs 9s 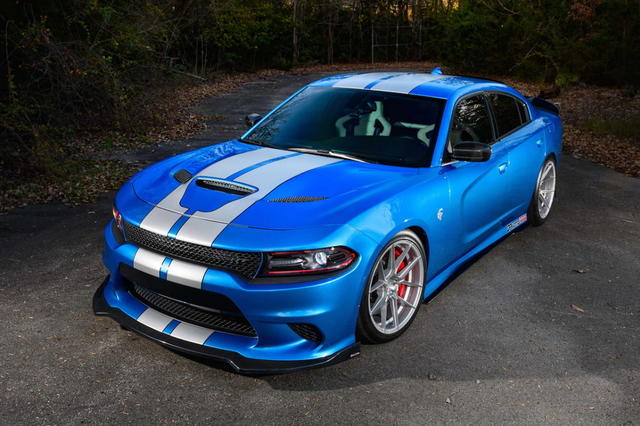 Love it or Hate it, this 'Bagged Hellcat Runs 9s
http://www.hotrod.com/articles/love-hat ... t-runs-9s/


Todd Fullford’s Mopar rap sheet doesn’t include the usual suspects. Rather than a photo album peppered with vintage A-, B-, or E-body muscle, Fullford’s Mopar alphabet started with K…as in Lee Iacocca’s automotive brainchild from the 1980s.

The venerable front-drive platform pulled the automaker out of the mud—both literally and financially. Not only did the K chassis serve as the basis for the trendsetting Dodge Caravan, the versatile platform underpinned popular compact cars such as the Dodge Omni, Charger, and Chrysler LeBaron. The very mention of these cars among gear heads is either met with affection or distain. Yes, many of the K-car derivatives were snoozers in the performance department. Chrysler recognized that if they wanted to attract young buyers, they would need to bolster their performance image. Adding turbochargers and forging a partnership with Carroll Shelby caught the attention of enthusiasts with boosted variants of the econobox Mopars of the era. Just about every variant of the K-car platform was available with a 2.2L turbocharged four-cylinder engine, including the minivans! Carroll Shelby’s outfit tweaked some of the models, which were sold under the “Dodge Shelby” banner. They featured more power, unique suspensions, fatter rubber, plastic body augmentations, and—most importantly—snazzy decals.

The idea resonated with buyers of Fullford’s generation. “A friend of mine in high school was into the turbo four-cylinder Chargers and Omnis,” Fullford reminisces. When it came time to buy his first performance car, the Mopar seed had taken root, and Fullford drove out of the local Dodge dealership…with a Stealth R/T twin-turbo. The car was the love child of a relationship between Dodge and Mitsubishi. “The car was way ahead of its time…all-wheel drive, four-wheel steering, electronic suspension, and twin turbos.” The high-tech nature of the car resonated with Fullford, who enjoyed the powerful boosted engine, sophisticated suspension, and aggressive styling. Sure, the Viper was also recently released, but that was a bit out of Fullford’s league.

Though hooked on high-tech Mopars, a foray into the music industry after college sidelined his Mopar habit for a few years. After Fullford’s time as a mildly successful guitarist took its course, DaimlerChrysler revived a legendary name. “When Dodge came back out in 2006 with the new Hemi cars, it rekindled my interest in Mopars,” Fullford recalls. “Between the Mustang, the new Camaro, and the new Challenger, it was like the ‘muscle wars’ all over again. The styling of the Challenger was perfect. It looked like an artist’s rendering of a futuristic Challenger from the early 1970s.”

Fullford progressed through several SRT variants: a couple Challengers, a Charger, and a 300. “I spent a lot of time modding them, breaking them, and occasionally blowing them up.” A Vortech supercharger even made its way on to one of the Challengers. The latest subject of Fullford’s attention is the 2016 Charger SRT Hellcat on these pages.

“Our nickname for the car is ‘The Ruined Hellcat.’” It’s a reference to the polarizing nature of the modifications—specifically, the air-bagged suspension. “We’d show up at the local Cars and Coffee and the response to a ‘bagged Hellcat was polarizing. Some people loved it, others hated it.”

But all the trash talk stops when this Hellcat trips the quarter-mile timing lights in the 9s. Fullford explains, “We’ve been trying to get the car in the 9s for quite a while. The mile-per-hour was there, but the track prep wasn’t in our favor.” That all changed when Fullford and his wife, Laura, went to Cecil County Dragway in Maryland. “We really wanted to get the car into the 9s, so we pulled out all the stops. I spent an hour removing the seats, door panels, and trunk carpet.”

After a several runs in the low 10s, the nine-second zone eluded the couple. Nonchalantly, Todd tossed the keys to his wife for a final run before heading home. With only a couple drag strip runs under her belt, Laura was a novice. The Charger hooked hard and logged a 9.83 at 138! Clearly, Laura is not only a quick learner, but also a quick driver. The milestone earned the couple their best time…and an invitation to leave the track. Future 9-second passes require a cage! “It ran fast enough that I’m not sure taking the stuff out of the interior mattered all that much,” Fullford reasons. “The car probably weighs 4,600 lbs, so saving a hundred pounds or so is trivial.”

The modifications for 9-second motivation are surprisingly straightforward. “It’s my daily driver, so I can’t have the car in pieces to make it faster,” Fullford reasons. The stock Hellcat blower is spun faster by a 2.5-inch upper blower pulley, and fed cooler air by a BWoody cold air intake and larger intercooler heat exchanger.

The secret sauce is a tank full of E85 fuel. Fullford installed a set of 1,000cc injectors and a Kenne Bell Boost-A-Pump to keep the supercharged 6.2L well fed. Fullford and his buddy, Josh Phillips, use an “unlocked” PCM and HP Tuner Pro software to tame the 18 psi of boost and alky mixture. “The E85 allows us to run more timing and boost while keeping the combustion cooler. It’s a great “daily driver race fuel.’”

Exhaust modifications are similarly simple: a pair of JBA catless mid-pipes and a Magnaflow cat-back are employed for track duty, though a stock cat-back is utilized on the street. “I like it a little quieter on my way to work,” Fullford explains as a reminder of this car’s daily-driven duty.

Coping with the 1000-horsepower mill’s torque is an aluminum driveshaft from The Driveshaft Shop, Per4mance Development differential brace, and a 3.09 final drive gear set.

Fullford fitted the Hellcat with an Air Lift Performance suspension kit featuring 30-way dampers and dual Viair 480 compressors. “Air suspension and drag cars usually don’t go together,” Fullford admits, “but our car is one of the fastest Chargers with air suspension.” After all, when a daily driver runs 9s, there’s not much more to say.

Ferrada Forged FR8 wheels are at each corner, measuring 20 x 10 up front and 20 x 11.5 in the rear. Tires are Nitto Invo, sized 275/35 and 315/25 respectively. Traction at the drag strip is provided by Mickey Thompson ET Streets on Bravado 18-inch rear wheels.

Cipher Auto harnesses and seats, keep the Fullfords comfortable and safe. “If I were to do it again, I’d avoid white seats. They’re almost dirty before you sit in them,” Fullford jokes.

The blue US Speedo gauges are a tasteful addition. Fullford recalls, “I had them for a while, but was hesitant to install them. However, once they were in, I’m really happy with how they look.”

Besides the stance, other attention-grabbing exterior bits include brushed aluminum Hellcat badges and the satin silver metallic stripes. An LED lighting upgrade gives the illumination a custom flair.

Sourcing the carbon-fiber bits was slightly more complex than placing a parts house order. Fullford explains, “When I first got the Charger, nobody made any carbon fiber parts for them. I found a guy on Instagram who made custom carbon parts, but there was a problem. He lived in the United Arab Emirates!”

Fullford’s new contact found a Charger in the UAE and made molds. Even compensating the maker was a challenge. “Sending money to the UAE wasn’t easy, so I had to pay him in increments. It was definitely a challenging situation.” But, the results were worth it. The unique carbon fiber rear spoiler, diffuser, side splitters, front lip, bumper insert, and mirror covers for this American car are all crafted by fellow enthusiast on the other side of the planet.

This Challenger is a labor of friendship, and the Fullfords are quick to credit their friends Josh Phillips, Mike Netsche, and Leslie Ray for their help and guidance on this project.

In a tongue-and-cheek reference to their garage-built Charger, Fullford applied the fictional “JPRacing1000” decals to the rocker panel of the Charger. Fullford explains, “A lot of the cars we run against are prepped by professionals, so the ‘JPRacing1000’ is a reference to Josh Phillips and the 1,000 horsepower this car makes.”

Todd Fullford not only enjoys the pride of building a ridiculously fast Charger Hellcat, but also reaps the benefits on his daily commute from his home in Mt. Juliet, Tennessee, to his workplace in Nahsville.

The Fullfords don’t have specific future plans for the Charger, other than a little nitrous if running 9s gets boring. Besides, a 2018 Dodge Challenger SRT Demon will compete for the Fullfords’ attention before long…