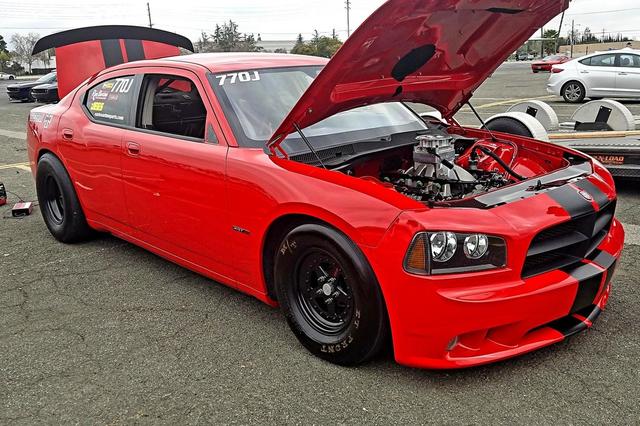 It’s hard to believe, but it was 14 years ago that the very first gathering of late-model LX-platform Hemi enthusiasts got together in a restaurant parking lot. Numbering in just the dozens, the world’s nascent third-generation Hemi community was a close-knit Southern California group—but they would wield significant clout over the coming years. Members of SoCalLX.com would eventually host the biggest event of its kind each year, garnering support from manufacturers, other clubs, and even Chrysler (now FCA) itself.

On Saturday, March 23, 2019, SoCalLX.com’s annual Spring Festival of LXs hit the famed Pomona Fairplex—the hometown track of the National Hot Rod Association. Things have come a long way since the burger joint parking lot, with more than 1,500 cars in attendance for 2019. And this year for the first time at Spring Festival: drag racing!

One of the reasons Dodge, SRT, Chrysler, and FCA is so on top of the pulse of their growing customer ranks is the fact that they make a point to actively support their fans through events like Spring Festival. As is now the custom at Spring Festival, FCA rolls out the red carpet for its fans by bringing thrill rides, concept cars, new production vehicles, displays, posters, and even top management. As in prior years, the 2019 event featured celebs and execs, like stylist Mark Trostle, FCA executive Ralph Gilles, designer Jeff Gales, and mayor of Muscleville, Bill Goldberg.

In prior years, attendees have had the privilege of giving their confidential feedback on new colors, designs, and vehicle packages. Last year, members of SoCalLX.com were asked to select their favorite color from a group of hues, and they chose one called “Black Eye.” That color is now available on the new 1320 Scat Pack Challenger, which proved to be a big hit this year. Another color—Sinamon Stick—was shown on a production Chrysler 300s with jaw-dropping results.

Perhaps the biggest news was a live drag strip, which was packed with Hellcats, Demons, and the new 797hp wide-body Hellcat variant, the Redeye. And let’s not forget about the Scat Pack cars, and their new weapon, the 1320. This Dodge production package takes the most salient aspects of the Demon and endows the 485hp Scat Pack Challenger with them. Things like drag-rated Demon-spec half-shafts, line lock, and a trans brake make their appearance for the first time in a main-line Dodge production product. The cherry on the top is Nexen’s new 275/40R20 drag radial, the first-ever drag radial to come standard equipment on a mainline production car. (The Demon was limited-production).

Oh, and this year’s teaser? It came in the form of a graphically overloaded Dodge Charger, designed to visually hide its most significant feature: wide 305mm tires and voluptuous fender flares. Those of you holding your breath for a widebody Charger—or dare we say it—a Widebody Redeye Charger—will want to circle their calendars for March 21, 2020, and point your Hemi towards Pomona. If past history is any experience, big news is coming...

Man, I really want to make it out there to one of the upcoming shows!