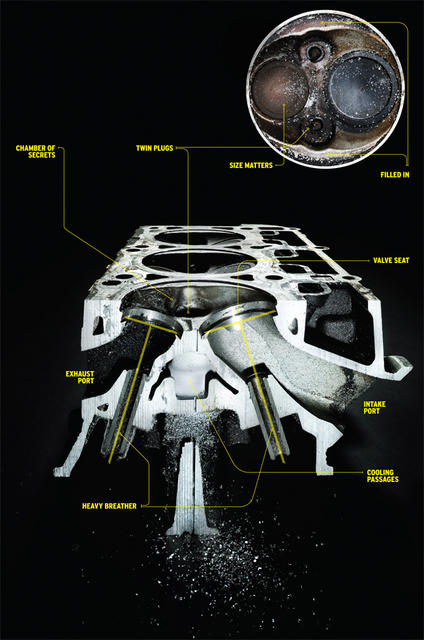 Prime Cuts: Cutting a Hemi Head in Half
http://blog.caranddriver.com/prime-cuts ... d-in-half/


The word “Hemi” has become synonymous with horsepower and muscle cars. It’s a point of pride to Mopar aficionados who gladly pop their cars’ hoods to show off those four letters atop the engine. But what, exactly, makes a Hemi a Hemi? We decided to slice into Chrysler’s 21st-century Hemi head and poke around.

“Hemi” is short for “hemispherical,” which describes the shape of the combustion chamber—imagine a tennis ball sliced in two. But from the beginning, Chrysler’s automotive Hemis have been just shy of half a tennis ball, with a section taken closer to the top than the middle. The result is a shallower bowl shape that allows for lighter pistons; a “full” Hemi would require massively domed pistons to fill the larger chamber. Chrysler has never been secretive about this new Hemi’s inspiration: It’s less a riff on the old 426-cubic-inch V-8 and more closely based on the two-valve Porsche 911 head from the 1995–98 model, a.k.a. the 993.

The new Hemi has two spark plugs instead of one because the valvesare too large to accommodate a single plug positioned near the chamber’s center. Two remote plugs met Chrysler’s combustion, efficiency, and emissions goals.

Exhaust valves are smaller than the intake valves because forcing out spent gasses is easier than drawing in fuel and air.

Unlike the classic Hemi, the new Hemi has part of the bowl shape filled in near the spark plugs. According to Chrysler, these filled areas aid the flow of gasses into and out of the head. And these areas make the new Hemi’s shape much less hemispherical than the original’s.

As in the original, the new Hemi has its two valves arranged on opposite sides of the head. The hemispherical shape of the combustion chamber allows for larger valves than are possible with other designs. And bigger valves permit maximum flow into and out of the combustion chamber. The shallower head of the new Hemi has a 34.5-degree angle between the intake- and exhaust-valve stems.

Compared with the new design, both the second-gen and original Hemi have a larger, 58.5-degree angle between the valves, resulting in a deeper combustion chamber.

1903: The Welch Tourist runabout is the first known production car powered by an engine equipped with hemispherical combustion chambers (in a 20-hp, two-cylinder configuration).

1941: Chrysler develops the XIV-2220 aircraft engine—a turbocharged and supercharged SOHC V-16 making 2500 horsepower at 3400 rpm from 36.4 liters. Although hemispherical head designs are common to aircraft engines of the era, this is Chrysler’s first application.

1965: Goldenrod, a land-speed-record car powered by four fuel-injected Hemis, goes 409.3 mph at the Bonneville Salt Flats and sets a record for wheel-driven cars that lasts 27 years.

1966: A two-four-barrel version of the 426 Hemi debuts. The street Hemi makes 425 horsepower and 490 pound-feet of torque in the Plymouth Belvedere and Dodge Coronet and Charger.

1971: The Hemi goes out of production but lives on in Top Fuel dragsters, Funny Cars, monster trucks, and offshore powerboats.